I usually start the year with a survey of my best movie-going experiences – considering projection, sound, audience enthusiasm, and, of course, the quality of the movie. But I had very few chances to go to the movies in 2020.

So, this year I’m offering the best new movies I’ve seen while sitting in front of the television. All of these received an A. My few, actual theatrical experiences are at the bottom of this article.

Up From the Streets: New Orleans: The City of Music 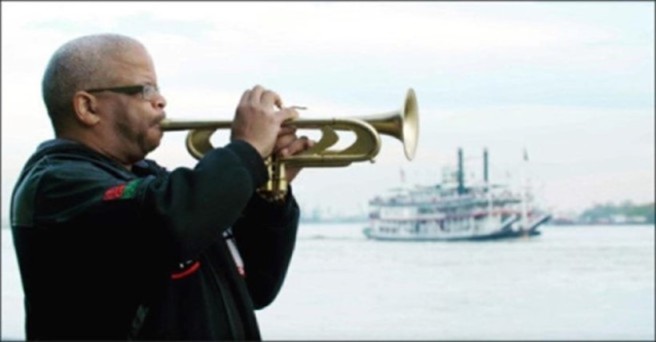 Most musical documentaries get the balance off. They tell you about these brilliant artists, but they rarely give you a chance to enjoy the music. But this one gets the balance right. There’s music almost throughout; all of it great. True, only a few songs are played from beginning to end, but they’re the right songs. And if filmmaker Michael Murphy couldn’t find the time to play a song completely, he picks the best moment in that song. You can almost dance from beginning to end. The film also provides an interesting history of American popular music. Read my full review. 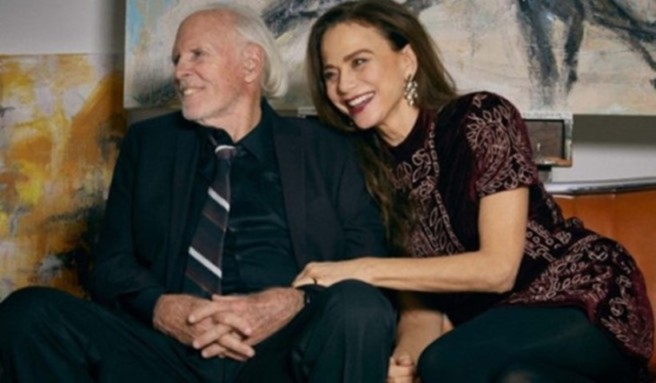 Alzheimer’s hurts not only the initial victim, but perhaps even more so the friends and family members who must watch a loved one’s mind slowly recede. As the film’s title tells you, the film is not about a famous painter with serious dementia, but about the woman who loves him. It’s her story; not his. Lena Olin and Bruce Dern both give excellent performances. If you’re lucky enough to grow old with someone, something like this may be in your future. Read my full review. 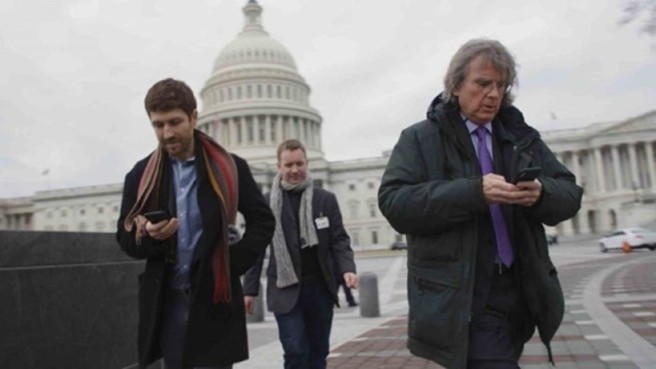 This documentary/fiction hybrid shows us at least one reason why society is in such a mess. Top programmers explain how computer algorithms manipulate us on Google, Twitter, and especially Facebook. We’ve become addicts, looking for that dopamine hit online. These companies know more about us than we know about ourselves, and they keep us all in our bubbles by giving us what we want to read. These companies have enough information to destroy a country if that’s what the customer wants. And you and I are not the customers. We’re just the products they’re selling.

Here’s something we almost never see in new movies: an upbeat, happy, big-budget, totally unrealistic, singing and dancing musical. And yet, this one is very modern. Four narcissistic Broadway performers, including Meryl Streep and Nicole Kidman, set out to prove they’re not totally self-absorbed. Their plan: help a small-town lesbian student battle homophobia. You know from the start how it will end, but the songs, dancing, and comedy makes this the most entertaining movie of 2020. The cast also includes James Corden, Kerry Washington, Keegan-Michael Key, Tracey Ullman, Mary Kay Place, plus Jo Ellen Pellman and Ariana DeBose as the young lesbians.

You can reasonably call this a sequel to Stop Making Sense, with great music, unique visuals, exceptional choreography, and all with Byrne at the center. Thanks to new technology, even the pianist can dance and play all over the stage. About half the songs came from The Talking Heads era, while others were new (at least to me). But this concert video is more political, and Byrne talks much more to the audience, about everything from houseguests to voting. Director Spike Lee keeps the sounds and visuals always exciting.

From the title, I expected an environmental documentary about what will happen to all of us when the arctic thaws. But Scott Ressler’s important film focuses on something much more immediate: Innuits, how their lives changed when white people came to the arctic, and the destruction of their culture. Ressler’s interview subjects are caught between two cultures and prefer the one of their elders. Yes, they have smartphones and modern winter clothing, and live in modern houses, but they still hunt if they can. They’re finally beginning to gain some control over their land, but the ice they depend on is getting dangerously thin. Virtually streamed at DocFest;
not currently available.

In 1991, eight adventurers with a scientific sense went into a large biosphere to live completely enclosed for two years, recycling their own oxygen and water while growing their own food. It didn’t work entirely as it was supposed to, and some cheating was involved. But the worst cheating, unsurprisingly, came from the money men. This interesting but unexceptional documentary covers the entire adventure, from long before the concept came to be up until the present.

How does cinema deal with the twin horrors of COVID and the Trump presidency? Paul Rudnick and Jay Roach chose to do it with monologues, and the result is very special. Bette Midler is a Jewish New Yorker talking to an unseen cop after losing her temper over a man’s MAGA hat. Dan Levy, the only male in the cast, is a struggling actor hoping to play a gay superhero. Issa Rae, the only person of color in the film, talks about an awkward meeting with Ivanka Trump. Sarah Paulson teaches meditation on TV, but she’s too unnerved because of her Trump-loving family. Finally, a nurse (Kaitlyn Dever) talks about a funny woman struggling with COVID.

What makes a pregnant woman hurt herself so badly? Bit by bit – or perhaps I should say bite by bite – Hunter (Haley Bennett) physically tortures herself. She swallows things: a marble, a pin, a battery. It gets worse. Carlo Mirabella-Davis’ fine drama slowly shows what causes Hunter’s deepening mental problems, as layer upon layer is revealed. Meanwhile, her handsome and filthy-rich husband – along with his parents – make everything worse. Read my full review.

Here are some movies that didn’t quite make the top ten, in alphabetical order:

Believe it or not, I did have six theatrical movie experiences in 2020. Most of them, of course, were before March. Here they are, from best to worst. Remember, I’m considering the image, projection, the enthusiasm of that audience, discussions, and, of course, the quality of the movie.

Before the screening, Associate Film Curator Kate MacKay introduced the film, telling us a funny story of how Mel Brooks hired the almost unknown David Lynch to direct The Elephant Man.
Eraserhead is weird and extremely gross, but the basic story is ridiculously commonplace. Henry meets his girlfriend’s parents. They have a baby, she leaves him, and the not-too-bright Henry must take on all the parental responsibilities. But while that description is accurate, it misses everything that makes this movie special. The 35mm print was very good (and the only one I saw last year).

This is the third time I watched the Oscars in a theater, but this time was the best time, even though it was sort of a disappointment. It was advertised as Up The Awards Benefit Bash (the theaters are not allowed to use the word Oscar in advertising these events). The title and the graphic suggested that they would be making fun of the whole thing. I expected, perhaps, comedians. But when the show changed to commercials, we got a strange and funny selection of clips. And everyone cheered when Parasite won. 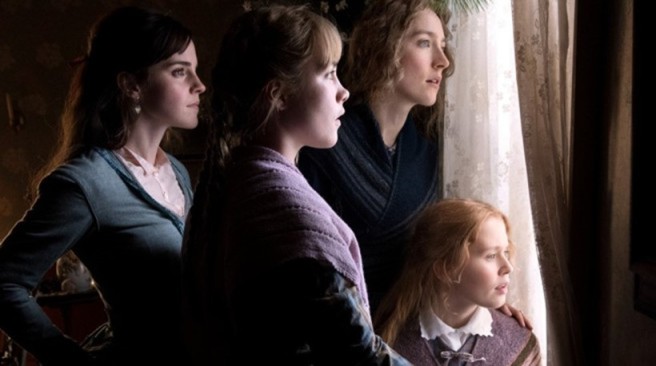 This was my last normal moviegoing experience of 2020; I went to a matinee in a local theater of a movie in first run. It’s a delightful film about a very nice family, in an equally nice small town, trying to get by while the family patriarch is off fighting for Union and against slavery. Writer/director Greta Gerwig lined up some of the best young actresses around, including Saoirse Ronan, Emma Watson, and Florence Pugh. Laura Dern plays the loving matriarch and Timothée Chalamet the boy that two girls want.

Another regular screening in a regular theater. To the film’s merit, Sam Mendes’ World War I adventure doesn’t glorify war; almost everything goes bad and remains horrible. On the other hand, it doesn’t even care to try to treat the enemy as more than cardboard villains. Mendes manages to create suspense and horror throughout this story about two British soldiers trying to bring an important message to an officer over dangerous territory. Cinematographer Roger Deakins tried to shoot the film to look as if it’s a single take, but some of the seams are often visible.

Now I remember why I stopped watching movies outdoors so long ago. The screen was too far away (and we were relatively up close), and to save the car’s battery, I had to borrow a lousy portable radio. But I really liked the movie: Cole (Ettinger) is a nice guy in a small, poor white town. He’s loved by everyone in the nursing home where he works, but he’s also selling drugs on the side. Soon he’s caught up with people who are not at all nice, and he must get out of this situation.

These two Fritz Lang action flicks, The Tiger of Eschnapur and The Indian Tomb, are two movies the way Kill Bill are two movies. A German engineer working in India (Paul Hubschmid) and a beautiful dancer (Debra Paget) fall in love. But an evil maharajah wants the dancer for himself. From that point on, it’s just one cliffhanger after another as the lovers run away, become separated, are thrown into dungeons, and so on. Along with being ridiculous and repetitive, it’s racist. On the other hand, the DCP transfer was fantastic. 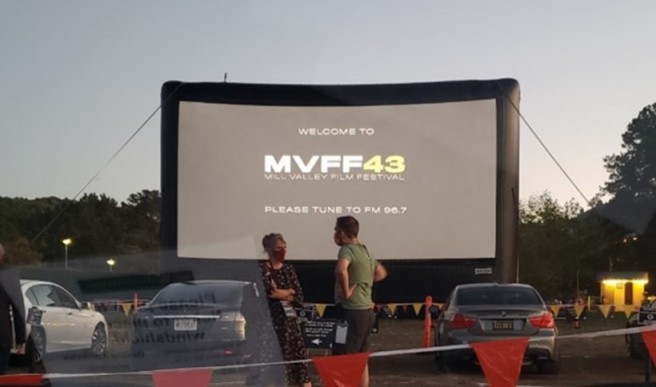