Last night (Tuesday), as part of the Mill Valley Film Festival, I went to a drive-in movie for the first time in maybe 50 years. I didn’t care for the experience, but I loved the movie – The Evening Hour. You can read more of my Drive-in Memories.

Now I remember why I stopped watching movies outdoors so long ago. It’s not really a good way to see a picture. And COVID-19, which created the current drive-in renaissance, made it worse due to all the necessary rules. Apparently, many people like this alternative, and I’ll still list drive-ins in my weekly newsletter.

On the upside, it was a nice night to be in a park. Someone at the Festival had a good sense of humor about the whole thing: 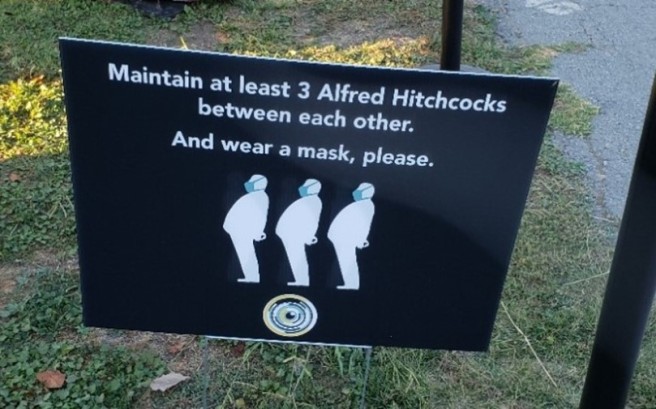 My wife and I came early – two hours before showtime – which seemed nice since the temporary outdoor theater was in a beautiful park with a lake. Unfortunately, we were allowed to leave our cars only to go the outhouses (a rule that apparently wasn’t enforced among the high-ticket holders in front of us).

The screen was huge and curved – my favorite kind. However, even in the best seat (or should I say parking space) in general admission, we were so far away that the screen looked small. The audio came from a small FM transmitter and played on our car’s radio. 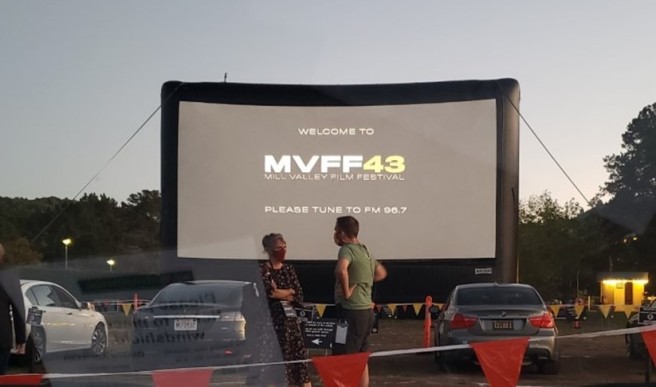 The show started with a Zoom-like discussion between director Braden King, star Philip Ettinger, and Festival Executive Director Mark Fishkin. This was the sort of discussion usually done after the movie, which made it a bit confusing. For instance, I assumed that coal would be a major part of the film, until I realized that Ettinger’s character was named Cole.

The discussion was still going on, no more than 30 minutes after we’d turned on the radio, when we lost sound. Our car turned itself off to save the battery. I left the car to find a solution…and I found one. I was able to temporarily swapped my driver’s license for a portable radio. The sound wasn’t as good as our car’s stereo, but it was adequate.

After the movie, two cars behind us couldn’t move. Their batteries were dead.

Now, about the movie:

A- The Evening Hour

Cole (Ettinger) is a nice guy in a small, poor white town—I’m guessing in Appalachia. The grandson of a preacher, he’s loved by everyone in the nursing home where he works. But he’s also selling drugs on the side. Some of his friends do the same. Soon he’s caught up with people who are not at all nice, and he must get out of this situation. The movie takes its time letting us learn about this community, making it more a character study than a crime drama. My only real problem is that the climax feels confusing.

The Evening Hour
is still streaming in the Festival and is very much worth seeing.