Here are four movies that aren’t playing in an upcoming film festival. No one asked me to review them. One is still in theaters. The others are currently available only in your own home.

World War I gave us many great films (and a lot of horrible, pointless death). But few of these movies are as funny, and no others as magical, as Philippe de Broca’s charming comedy. A Scottish soldier is sent to deactivate a timebomb that will soon destroy a small, French village. The townsfolk have run away, but the inhabitants of the local insane asylum are suddenly free to do what they want. These gentle souls create a community far kinder and much more delightful than the war going on outside the city’s walls. Georges Delerue’s brilliant musical score turns a somewhat silly fable into a glorious fantasy.

If you only saw King of Hearts when it was popular in the 1960s and ’70s, you haven’t seen the real ending, removed from the original American release. 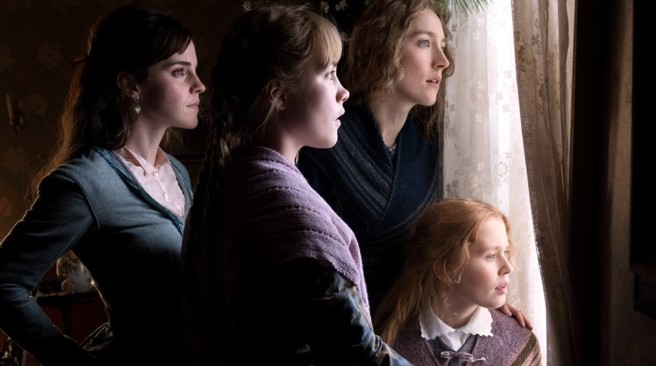 I hadn’t read the novel or seen any other movie version, so the story was all new to me. But it’s a delightful film about a very nice family, in an equally nice small town, trying to get by while the family patriarch is off fighting for Union and against slavery. Writer/director Greta Gerwig lined up some of the best young actresses around, including Saoirse Ronan, Emma Watson, and Florence Pugh. Laura Dern plays the loving matriarch and Timothée Chalamet the boy that two girls want. The movie is a bit confusing as it jumps from one time to another – one daughter is suddenly married and later were see her wedding. The unusual ending works just fine.

Ben Hecht’s and Charles MacArthur’s The Front Page was amongst the funniest Broadway plays of the 1920s. But Lewis Milestone’s movie version (the first of four), just isn’t funny. I don’t think it’s an early talkie problem; his previous picture, All Quiet on the Western Front, was the first great talkie, and Front Page manages some effective visual tricks rare in that period. But the comic timing is almost always off. Skip this version and go to the next film version of the play, His Girl Friday.

Daniel Craig’s second time as James Bond, a sort of sequel to Casino Royale, is the worst Bond flick since the 1980s. The plot is muddied and absurd even by Bond standards. Bond gets in a chase, he kills someone, M tells him he’s behaving badly, he has another chase, he kills someone, and so on until the closing credits. And none of the chases and fights feel original, exciting, or interesting. There’s a weak bid towards progressive politics, but that’s dropped quickly.