I had a horrible, sickly January, pretty much keeping me in the house. It wasn’t until this Monday that I felt I could go to a movie theater without ruining everyone else’s fun with my coughing and sneezing. (That’s why I didn’t cover Noir City or IndieFest this year.)

Here’s what I’ve been seen for some time, in order of best to worst.

Stanley Kubrick’s second film just may be the best-looking movie made on a very tiny budget. He raised money from friends and family, cut corners all over, and yet resulted in something special. Kubrick shot the picture as well as wrote, directed, and edited, and it’s one of the best-looking noirs ever. The fight scenes are striking and powerful. But there’s nothing original or special about the hackneyed story. After this movie, all of his films were made with Hollywood money, and would be based on published novels (with the arguable exception of 2001).

B Zero for Conduct (AKA Zéro de conduite, 1933), Criterion Channel

Students rebel at a strict boys’ boarding school. Oddly, not all the teachers seem to be jerks…one even does a surprisingly good Charlie Chaplin imitation. You can’t watch this 1933 film, which uses dialog sparsely, without thinking of the films it inspired, including François Truffaut’s The 400 Blows and Lindsay Anderson’s If…. Often funny and almost always anarchistic. Like Buster Keaton’s Sherlock Jr., this 44-minute movie is too short to be called a feature and too long to be a called a short. 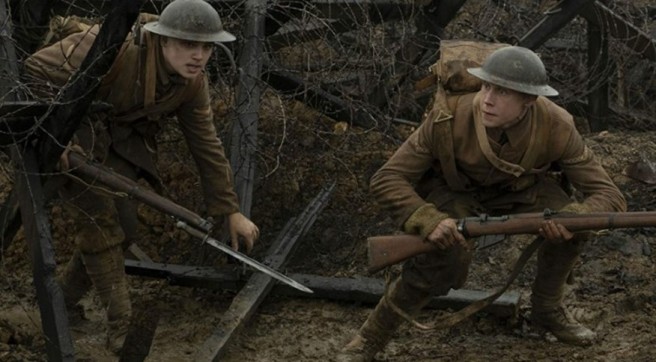 To the film’s merit, Sam Mendes’ World War I adventure doesn’t glorify war; almost everything goes bad and remains horrible. On the other hand, it doesn’t even care to try to treat the enemy as more than cardboard villains. Mendes manages to create suspense and horror throughout this story about two British soldiers trying to bring an important message to an officer over dangerous territory. Cinematographer Roger Deakins tried to shoot the film to look as if it’s a single take, but some of the seams are often visible.

How many movies do you have to see about self-destructive country western singers before you get sick of them? The most original twist on the formula that you get here is that the young woman who loves him and suffers for him is Jewish (Alia Shawkat). Oddly, the film gives Ben Dickey, the actor who plays Blaze, credit for writing most of the songs, even though the real Blaze Foley really did write songs. You know from the start that Blaze will die young, and you spend most of the movie waiting for it to happen. Director Ethan Hawke should stick to acting.

By the late ’60s, American audiences wanted films that were edgy, difficult, and experimental. But not every experiment works. The story might have worked as a satirical comedy, which is probably why composer Marvin Hamlisch worked so hard to make it sound tragic. Burt Lancaster stars as a member of a wealthy community; they all know each other and spend their time drinking near their backyard swimming pools. He decides to swim home via his neighbors’ pools – although he really just walks from pool to pool and swims one lap in each. On the other hand, Lancaster looks great in swimming trunks – the only thing he wears, and briefly not even that.