After seeing Stanley Kubrick’s 2001: A Space Odyssey on the big screen for the first time since – well, at least ten years – I realize that it’s a much better film than I remembered. (For what it’s worth, that last time was also in 70mm at the Castro.) I know now that it’s as great a film as I thought it was in 1968.

For its daring story structure, striking visuals, breathtaking use of music, and refusal to explain what it’s all about, I’m putting 2001 on my A+ list of all-time great classics.

What changed between this screening and the last one? Me. To truly except the film as it is, I had to strip away what the film was. As I discussed in my Tuesday article about 2001, Kubrick and his screenwriting collaborator, novelist Arthur C. Clarke, showed us a probable and optimistic future.

That future never happened, and as prophesy, 2001 failed. But as fantasy, adventure, mystery, and even theology, it’s still a brilliant use of cinema. That’s a surprising statement for what was in its time the most realistic science fiction film yet made.

2001 tells you little, but it shows you a great deal. No one ever explains, for instance, how centrifugal force can create artificial gravity, but when you see it in action, you watch an astronaut jogging in a hallway that turns constantly upward into a circle, you immediately understand what’s happening.

Kubrick and Clarke created an epic in four movements, two of them wordless. And they’re all brought together by a simple, black monolith that, like the ending, is never entirely explained.

The first movement follows a tribe of proto-humans four million years ago, struggling to survive in the African plains. They encounter the monolith, and the big step toward civilization, and war, begins.

The second movement shows us a trip to the moon as imagined by Clarke and Kubrick. Yes, there’s a story, and the monolith pops up, but the movement is really about flying to the moon on Pan Am commercial spacecrafts and stopping at a space station

The third movement is the most conventional, and with a few tweaks could work as a separate feature film. A trip to Jupiter, with three astronauts in suspended animation and two more wide awake, is threatened by a sentient computer that runs the entire ship.

This is a good point to discuss the only interesting character in the film: The HAL 9000 computer. Unseen actor Douglas Rain gives him a calm, mid-Atlantic, soothing voice, with just hints of emotions that may or may not be real. Most of the film’s humor comes from Rain’s not-quite deadpan delivery. (Another big laugh, in the second movement, involves directions for a zero-gravity toilet.) But HAL has never read Isaac Asimov’s Three Laws of Robotics. He kills four of astronauts, in ways that are frightening in their cool dispassion. HAL’s own death, on the other hand, has all the fear and pleading of a slow execution. 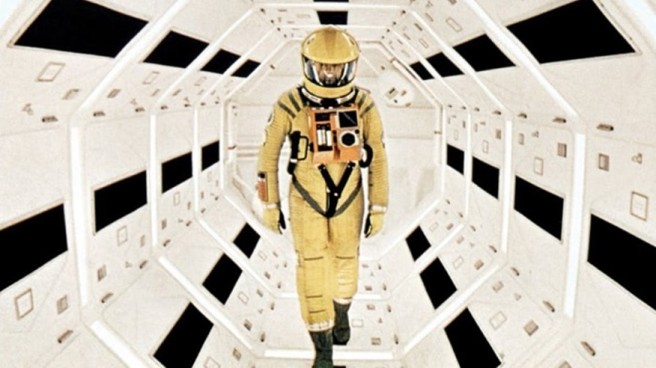 The final movement has been called a lightshow, a trip, and an utter bewilderment. Visually stunning, it refuses to tell us what’s happening. The number of guesses is probably beyond the infinite. But I long ago stopped worrying; I just sit back and enjoy the ride.

You can’t talk about 2001 without discussing Kubrick’s unusual choice of already-existing music. No other piece ever cried “This is important!!!” like the opening fanfare of Richard Strauss’ Also sprach Zarathustra, and Kubrick uses it only at monumental moments, such as the invention of tools. And Johann Strauss’s Blue Danube seems odd yet perfectly appropriate for the trip to the moon. A lot of experimental, artistically daring movies came out in the late 1960s. But 2001 was different. It was a big-budget, Cinerama roadshow film, playing initially in only a few big theaters at higher-than-usual ticket prices. Roadshow films tended toward the very safe (think The Sound of Music). Not this one, and it was a huge box office hit.

Movies set in the near future date quickly. 2001: A Space Odyssey transcended that limitation, even if I took a while to understand that.

But I still want to see it on a huge, curved screen.