I’m not sure who proclaimed 1939 The Great Movie Year. Probably it was Ted Turner, when he owned the MGM, Warner, and RKO libraries.

A lot of beloved classics came out that year, including The Wizard of Oz and Gone with the Wind – the two most beloved films of Hollywood’s studio era. Also, 1939 was the apex of that era, when the major studios worked like well-oiled machines. They made more movies that year, which means they made more good movies. Of course, that also means they made more bad movies, but few remember them.

The Stanford starts a two-month series Tuesday of American and British films that opened that year. For people who believe that 1939 was an exceptional movie year (the year pretty much sucked for everything else), it’s something to celebrate.

There’s a little bit of cheating here. On December 21 and 22, the Stanford will screen The Shop Around the Corner, officially a 1940 film, although it was shot in 1939. And they’re ignoring the year entirely on December 24 for It’s a Wonderful Life (1946).

Here are a few of the 1939 movies in the series, in the order they’re showing them:

B+ The Hound of the Baskervilles, Tuesday & Wednesday, November 12-13

The best Sherlock Holmes novel gets a reasonably close and very effective adaptation in the first Holmes adventure starring Basil Rathbone and Nigel Bruce. Yes, the forbidding English moors are on a soundstage, but they still provide the sense of dread that the story requires. Rathbone is the perfect Holmes, and this is one of his best vehicles as that character. On a double bill with Three Smart Girls Grow Up.

John Ford’s masterpiece, to my mind the greatest of all westerns, rarely plays theatrically in the Bay Area. The story: Nine very different people must cross dangerous territory in the titular vehicle – a journey that forces them to confront their prejudices as well as angry Apaches. A young, impossibly handsome John Wayne made the leap from B pictures to A-list star with his performance as an escaped convict, but it’s Thomas Mitchell’s alcoholic doctor who really carries the picture. If you’re one of those people who doesn’t have to see a western to know they’re not worth seeing, Stagecoach will open your mind. Read my A+ appreciation. Double-billed with Juarez.

A Only Angels Have Wings, Saturday & Sunday, November 30-December 1 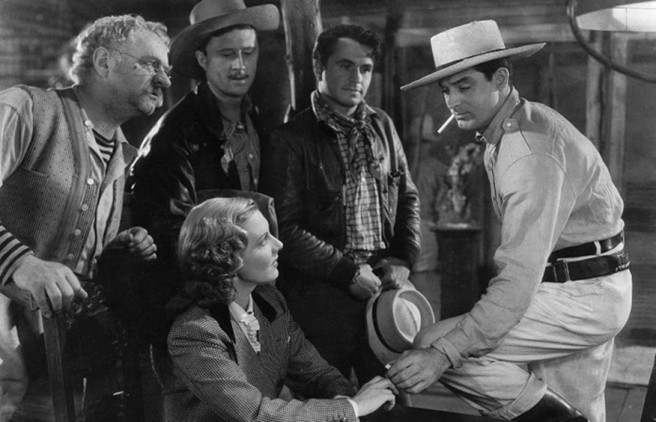 Cary Grant heads a team of mail plane pilots in a remote corner of South America. There’s little plot here, just a study of men who routinely fly under very dangerous conditions, and how they cope with death as an every-day part of life. The only non-comedy out of the five films that Grant made for director Howard Hawks. On a double bill with John Ford’s Young Mr. Lincoln.

A- The Adventures of Sherlock Holmes, Tuesday & Wednesday, December 10-11

The Adventures of Sherlock Holmes was the second of 14 Sherlock Holmes films starring Basil Rathbone as the famous detective and Nigel Bruce as his sidekick, Dr. Watson. It’s also the last of the series to be shot on a decent budget. Here, Holmes and arch-villain Professor Moriarty (George Zucco) appear to admire and even like each other, even though they know that one of them must eventually destroy the other. Ida Lupino plays the lady in distress. Double-billed with Alfred Hitchcock’s last British movie, Jamaica Inn, which I saw long ago and didn’t care for. 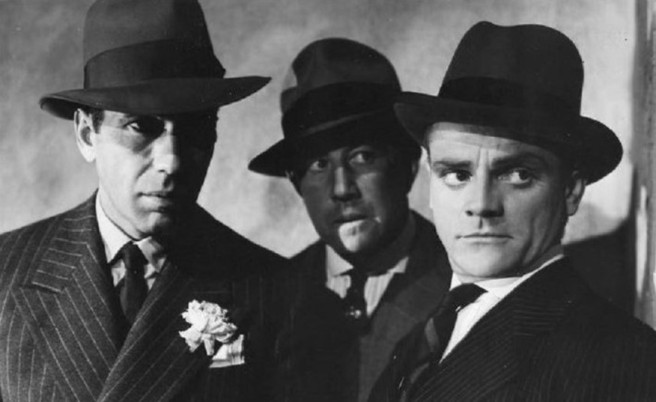 Interesting how the best gangster movie of the 1930s arrived years after the genre quieted down. Perhaps historical perspective helped. James Cagney returns home from WWI, discovers that he can’t get an honest job, and then finds work in the new, emerging industry–illegal bootlegging. He rises to the top of the racket, only to discover that it won’t bring him happiness, a nice girl, or security. Humphrey Bogart, on the edge of stardom, plays a much less sympathetic hoodlum. On a double bill with John Ford’s Drums Along the Mohawk.

A- The Shop Around the Corner, Saturday & Sunday, December 21-22

Ernst Lubitsch mixes a little drama into this romantic comedy set in a Budapest store. James Stewart and Margaret Sullavan play employees who hate each other in person, but as anonymous pen pals, they’re in love. The film has a serious adultery subplot, which is surprising, since Lubitsch generally treated adultery as fun and games and no big deal. But you never quite believe that Stewart and Sullavan are Hungarian. The movie was remade at least twice, as In the Good Old Summertime and You’ve Got Mail, but this time, the original is really the best. On a double bill with The Wizard of Oz…and I don’t think I need to tell you about that one.

Thanks to the great Ernst Lubitsch, Greta Garbo’s first comedy and penultimate film is sweet, charming, romantic, and quite funny. She plays a loyal Russian Communist who comes to Paris to supervise three bumbling comrades messing up government business. But she’s soon charmed by both capitalism and Melvyn Douglas. The Billy Wilder script nails the absurdities of Communism: “The last mass trials were a great success. There are going to be fewer but better Russians.” On a double bill with The Cat and the Canary.

C Gone with the Wind, Thursday through Sunday, January 2 to 5.

One of the most beloved Hollywood movies of all time doesn’t do much for me. Okay, it’s visually beautiful, using colors in ways that no one else did before. The first part (before the intermission) is rousing and exciting, but the second part (after the intermission) is dull and boring. Worst of all, it’s an extremely racist film, even by 1939 standards – looking back nostalgically at the “good old days” of slavery and suggesting that emancipation had been at best a tragic mistake and at worst an evil revenge against the gallant South. You can read my essay. Since it runs almost four hours, there is no double bill.

One thought on “Movies from 1939 at the Stanford”