Nine determined people face mortal danger, their own demons, and society’s built-in prejudices as they journey from one town to another in John Ford’s classic western from 1939, Stagecoach.

I first saw Stagecoach in a film history class almost 45 years ago. It immediately became my all-time favorite western, and remains so to this day. On one level, the nine main characters are western stereotypes – the good bad man, the prostitute with a heart of gold, the drunken doctor, and so on. But most of them are also fully-developed human beings, acting in ways that surprise the audience’s expectations…and their own. And as a group, they’re a microcosm of society, all thrown together in an uncomfortable contraption on a dangerous journey.

Stagecoach clearly belongs on my A+ list of all-time great films. To make this list, a film must be at least 20 years old, has been a personal favorite for decades, and is either a perfect examine of its genre or transcends genre altogether.

Six passengers and two employees take the stagecoach from Tonto to Lordsburg, despite the danger from Geronimo’s Apaches. Some are decent, respectable citizens. The others, the outcasts, are the ones that win our affection.

Taking them through is the driver (Andy Devine) and the marshal running shotgun (George Bancroft). On the way, they’ll pick up another passenger of sorts – the notorious Ringo Kid, who has just busted out of jail with vengeance on his mind.

John Wayne spent most of the 1930s starring in the cheapest of B westerns. The part of the Ringo Kid made Wayne a star of A movies. You can see why. At the age of 31, he’s tall, thin, graceful, and handsome as hell. He plays Ringo as an easy-going nice guy, extremely naïve, but with a troubled and dark past.

Claire Trevor got star billing as Dallas. When we first meet her, the Law and Order League is running her out of town. In 1939, a Hollywood movie couldn’t openly state that she was a prostitute, but Ford makes it clear.

Hollywood movies of the time also couldn’t use the word pregnant or show a woman in a family way. That may help explain Mrs. Mallory (Louise Platt), the other woman on the stagecoach. She’s a fine southern lady, probably from a formerly aristocratic family. She does not look pregnant. She’s intent on getting to her husband, an officer in the Cavalry, and ignores friendly advice about “a woman in your condition.”

Being properly brought up, Mrs. Mallory cannot stand breathing the same air as a prostitute. When Dallas offers to help, which she does frequently, Mallory responds with a haughty “I’m quite all right, thank you.”

There’s another former southern aristocrat on the trip, the gambler Hatfield (John Carradine). He sees himself as Mallory’s knight in shining armor, carrying for the good woman and treating everyone else as dirt. After all, they’re not to the manner born and probably fought for the Union. But Hatfield grows as they travel, sometimes in small and subtle ways.

Donald Meek’s Mr. Peacock, primarily a comedy-relief character, also grows on the trip. A whiskey drummer whom everyone assumes is a reverend (they also keep forgetting his name), he’s so timid he struggles to say a word. And yet, once Mrs. Mallory’s baby is born, he takes over. He is, after all, the only father on the trip.

Thomas Mitchell deservedly won an Oscar for playing Doc Boone, the drunken doctor barely hanging onto his dignity – and my favorite character in the movie. Boastful, talkative, annoying, and often so drunk he can barely stand, he manages to deliver a baby and act as the moral center of the movie. It’s one of the great supporting roles in cinema.

There’s one true villain amongst the travelers: the crooked banker Gatewood (Berton Churchill). Running away with a large cache of gold that doesn’t belong to him, he expects special treatment and mouths off like a 21st-century Republican: “America for the Americans! The government must not interfere with business! Reduce taxes…What this country needs is a businessman for president!”

John Ford had a way of creating westerns that seemed to teeter between reality and myth – especially when he was working in black and white. He did it through photography, music, and exceptional locations.

Stagecoach was Ford’s first picture shot in Monument Valley, a location he would return to again and again. With its massive buttes rising from the desert floor, the American west becomes Mount Olympus, and the puny people in the stagecoach come to challenge the gods.

Cinematographer Bert Glennon had a lot to do with that effect. Outside, cloud formations tower over the people and the small, slightly-civilized stopovers on the way. Inside buildings, rough walls and ceilings give a sense of something barely there.

While giving credit, I should mention Dudley Nichols’s witty and perfectly-constructed screenplay, based on a short story by Ernest Haycox.

By today’s standards, Stagecoach is pretty racist. The Apaches are simply bloodthirsty savages, and even the ones that come into civilization can’t be trusted.

To be fair, that’s probably how it looked to most white settlers in the 1880s. The displaced native populations occasionally attacked and killed white people indiscriminately, sometimes in particularly cruel ways. And they had understandable reasons for doing so.

But the film doesn’t suggest why the Apaches were so violent. White settlers brought them diseases, destroyed their cultures, forced them into ghettos called reservations, and massacred in higher numbers than the original people could even dream of. 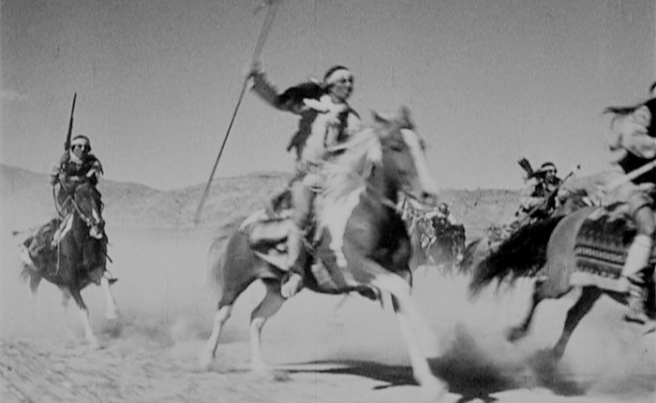 In Stagecoach, no Apache says a word. None of them has a name or a character. The big battle (the first of the film’s two great climactic action sequences) shows them as great horsemen. But they also make some very stupid strategic mistakes.

You can’t expect a film from 1939 to show 2017 values. (Remember that the much worse Gone with the Wind came out the same year.) I squirm occasionally at some scenes, but I also realize that Stagecoach is a work of its time, and one of the greatest films of all time.