I find it disturbing that so many people still love Gone with the Wind. I’m not talking about esthetics here (although I do discuss those below), but content. Even by the standards of Hollywood in the first half of the 20th century, David O. Selznick’s epic comes off as exceptionally racist.

Warner Brothers, which did not make Gone with the Wind but now owns it, is making a big to-do this month over its 75th anniversary. They’ll start with a big presentation to a lot of big multiplexes, followed by a major new Blu-ray Ultimate Collector’s Edition. Over the years, Warner released multiple Blu-ray editions, including an extensive three-disc box set which they sent me for my 2010 Blu-ray gift guide. I didn’t include it in the guide, because I didn’t have the space to discuss the film’s celebration of slavery. 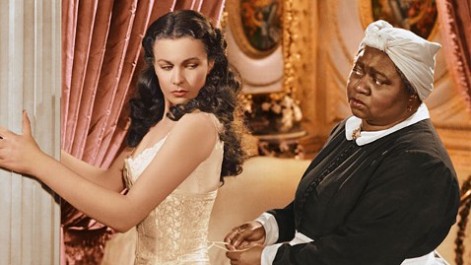 You can’t extensively watch American films made before the Civil Rights Movement without growing a thick skin about casual racism. I’ve grown a sufficient skin to enjoy and recommend Buster Keaton’s Seven Chances, despite its cake-walking, idiotic hired hand–played by a white actor in blackface. I love Seven Chances, but every time that character comes on screen, I stop laughing and cringe.

It’s one thing to use racist stereotypes for a cheap laugh (and make no mistake; I do not excuse such images). But it’s something entirely different to seriously look back nostalgically at the “good old days” of slavery, and to suggest that emancipation had been at best a tragic mistake, and at worst an evil revenge against the gallant South. Selznick made this worldview clear from the very start with an onscreen prologue:

There was a land of Cavaliers and Cotton Fields called The Old South…Here in this pretty world Gallantry took its last bow…Here was the last ever to be seen of Knights and their ladies fair, of Master and of Slave…Look for it only in books for it is no more than a dream remembered. A Civilization gone with the wind…

Hey, if my parents wanted me to grow up mythologizing the old South, they wouldn’t have named me Lincoln.

GWTW isn’t the only Hollywood movie to take that attitude. The following year, Warner Brothers released Santa Fe Trail, which preached that the whole tragedy of the Civil War could have been avoided if northerners had just understood the wonderful institution of slavery. And Hollywood’s first big blockbuster, The Birth of a Nation, outdoes them all, combining GWTW’s slave-owner’s world view with Seven Chances’ black-faced buffoons. Birth’s exciting climax involves the Ku Klux Klan riding to the rescue.

Today, Santa Fe Trail is largely forgotten. And Birth of a Nation is more famous for its racism than for its its importance in advancing the art and business of cinema. Almost a century after its world premiere, to screen Birth in a theater is to invite vandalism. I actually believe that Birth should be seen, but only in a historical context.

But Gone with the Wind plays in theaters, and gets yet another Blu-ray release, with very little controversy. My copy has a disc filled with over eight hours of extras, in which I found only one suggestion that there may be questionable content. Putting one short subject into historical perspective, a newly-recorded narration warns that some elements are “today considered unacceptable.” I don’t know why they couldn’t say the same about the feature.

Gone with the Wind is still a popular film, and to some degree, I can see why. The first half is a thrilling, exciting epic about the collapse of a civilization, beautifully staged and shot. The picture bogs down in the post-war second half. That’s when I find myself waiting for enough main characters to die so it can end. But even in that second half, it’s still gorgeous to look at.

Production designer William Cameron Menzies took the six-year-old three-strip Technicolor format into new dimensions with his magnificent visuals. The colors seem hyper-realistic, yet they evoke the characters’ attitudes and emotions. Note the big ball sequence, awash with colorful costumes. But Scarlett and Rhett are dressed in black, drawing our eyes to them and reminding us that they will eventually fall in love (unfortunately, I couldn’t find a good still from that scene). With Gone With the Wind, color stopped being a gimmick, and became part of the story.

And yet, in another sense of the word, color is the problem. This isn’t just a beautifully-designed and rousing epic that turns boring after the intermission. It’s a reminder of just how acceptable racism was in America a scant 75 years ago. And as long as the film is regularly shown without discussion of that context, our problem with race won’t get any better.