Note: I’ve altered this article to correct an error.

Doc Stories (a festival I didn’t have time to cover) closed Monday night with a bang – a celebration of Martin Scorsese’s non-fiction work. Not surprisingly, it was a packed house.

SFFILM Director of Programming Rachel Rosen started the event with a wonderfully short introduction, followed by a clip reel. More than anything else, this collection of scenes reminded us that when it comes to documentaries, Scorsese is all about rock and roll.

Then it went directly to the feature on hand and Scorsese’s most recent doc (well, arguably a doc), Rolling Thunder Revue: A Bob Dylan Story by Martin Scorsese. 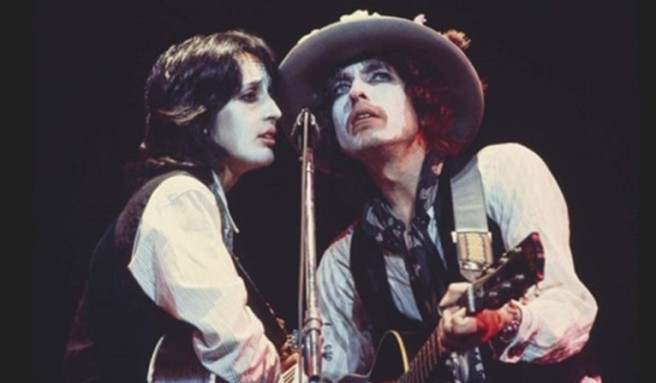 The movie uses archival 16mm footage and new interviews – some of them with fictitious people – to tell us the story of Bob Dylan’s near-mythical 1975-76 tour. This wasn’t just a Dylan tour; Joni Mitchell, Allen Ginsberg, Patti Smith, Roger McGuinn, Ramblin’ Jack Elliott, and Scarlet Rivera came along for the ride. And then there’s Joan Baez, singing, dancing, imitating Dylan, and talking backstage with him about their history together. The rehearsal and performance footage intimately capture these musicians as they work and play. I’ve never seen Dylan so intense as he performed.

The archival footage is mixed with recent interviews, and this is where this documentary moves into the realm of mockumentary. Actors play fictitious characters. Sharon Stone is a real person, but her Rolling Thunder experience is entirely fictitious.

I had seen this mixture of documentary and mockumentary before on Netflix, and I still give it an A. As is so often the case, it was a better movie in a packed theater. There’s a lot of humor in Rolling Thunder, and laughter always works better in a crowd.

After the screening, Rosen and Scorsese came on stage to discuss this film and his other documentaries. Some highlights of the discussion, edited for clarity and brevity:

In my early years I just watched narrative fiction films. The sense of non-fiction slipped in during the 40s and 50s. The closest to documentaries were the film noirs.

There was no Q&A with the audience.