Director Alfonso Cuarón (Gravity) returned to his native Mexico and created an amazing film – a loosely-plotted study of Mexico City, 1970-71, through the eyes of an indigenous maid who works for a comfortable middle-class family. And no, this is not entirely about class differences, although that always lurks in the background. Roma is a study of a time and a place, a culture, a people, women who trust untrustworthy men, and one special person, who happens to be a maid. Beautifully shot in black-and-white scope. 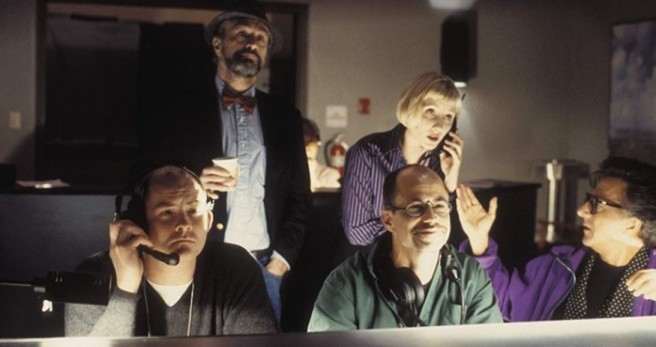 This 1997 satire, co-written by David Mamet and directed by Barry Levinson, seems prophetic today. To keep the electorate’s mind off a White House sex scandal, the government fakes an international crisis followed by a war. The film stars Robert De Niro as the government operative who runs the scam and Dustin Hoffman as the Hollywood producer hired to make it look real. Anne Heche, Woody Harrelson, Denis Leary, Andrea Martin, and a not-yet-famous Kirsten Dunst grace the cast. I haven’t seen it in more than 20 years, but I liked it then.

It’s been a long, long time since I’ve seen this 1987 comedy, but I remember it fondly. Thrown-together odd couple Steve Martin and John Candy rush desperately to get home in time for their respective Thanksgiving dinners. But everything goes wrong as one form of transportation after another fails. As part of Alamo Drafthouse’s Big Screen Science series, Kishore Hari and Jeff Silverman will discuss transportation, fire, and shower rings.

Free, but you should probably reserve a ticket ASAP (the screening at the Rafael is already sold out). Yes, it was revolutionary to make a huge-budget superhero movie with an almost entirely black cast. But Black Panther is more complex than a simple good vs. bad action flick with dark complexions. The main villain has a serious point, and the hero must face some ambiguously moral choices. It’s also an amazingly fun action movie. But I wish the filmmakers had confronted the absurdity of an absolute monarchy. With a live-streamed conversation with writer/director Ryan Coogler. Part of #GIVINGTUESDAY.

A+ North By Northwest & B Charley Varrick, Castro, Wednesday

North By Northwest:, Cary Grant plays a suave and witty advertising executive chased by evil foreign spies (who think he’s a crack American agent), and the police (who think he’s a murderer). So, he must escape almost certain death again and again while spending quality time with a very glamorous Eva Marie Saint. Alfred Hitchcock’s light masterpiece. Read my A+ appreciation.
Charley Varrick: The usually loveable Walter Mathew breaks type to play a brilliant and sometimes ruthless criminal in this Don Siegal-directed crime thriller. He robs a small-town bank and gets much more money than expected. And that means only one thing: The Mafia will soon be after him. 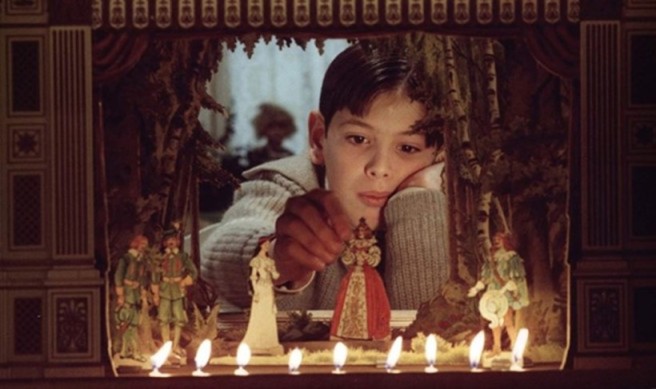 In Ingmar Berman’s penultimate film, set in early 20th-century Sweden, two happy children enjoy their happy family. But it’s a fragile world, and one parental mistake could have it tumbling around the children’s ears. When their father dies and their mother marries an extremely strict, Calvinist bishop, the children’s lives become a living hell, made bearable only by Alexander’s prolific imagination. The PFA will screen the 188-minute theatrical cut; next month they will screen the 312-hour miniseries version. Read my Blu-ray review. The last film in the series In Focus: Ingmar Bergman.

Young Ofelia (Ivana Baquero) lives in fascist Spain with a cruel and powerful stepfather. Her reality is very scary, but so is the fantasy realm into which she frequently escapes. But at least the fantasy world, which may or may not be a figment of her imagination, holds out the possibility of hope. Guillermo del Toro fashions a nightmare inside of a nightmare, filled with dark, gruesome, and often gory imagery, a child’s fantasy that’s appropriate only for adults, and an unforgettable experience.

I’m always a sucker for a historical epic, but I rarely get to see one set in a time and place that I remember. Milk manages to be sprawling but never boring, and inspiring without preaching. I’ve always known that Sean Penn was a great actor; it’s nice to discover that he can do “happy” as well as more tragic emotions. James Franco is also very good in what you can call the “chick” part. On a double bill with the non-fiction version of the same story, The Times of Harvey Milk.

A- Women On the Verge of a Nervous Breakdown, New Parkway, Sunday, 9:10

Men are jerks and women are crazy. At least that’s the view of Pedro Almodovar’s comedy of infidelity. The picture starts like a reasonably serious comedy, sprinkling a few laughs in with the character development. Yet several touches (consider the décor and the detergent commercial) suggest something wilder. By the half-way point, the movie is as wacky as classic American screwball comedy–and considerably bawdier. Carmen Maura stars as the primary woman wronged, with an impossibly young Antonio Banderas playing the son of the man who wronged her.

I’ve seen all for of the shorts on the bill, and I can easily recommend them. Along with being very funny, Charlie Chaplin’s The Bank is an important step towards the pathos that would soon deepen his comedies. The little-known Pass the Gravy, starring Max Davidson, is side-splitting hilarious. So is the Laurel and Hardy entry, Two Tars, which shows them at their most destructive. Fatty Arbuckle’s The Hayseed, co-starring Buster Keaton, is the weakest of the bunch, but still pretty funny.