With his last starring film, A King in New York (1957), Charlie Chaplin finally remembered that he was first and foremost a clown. For the first time since The Great Dictator, he’s made a movie that is more than sporadically funny. And yet he manages to give it a serious side as well.

Which isn’t to say it’s a comic masterpiece. It doesn’t compare to The Gold Rush or City Lights. But it’s funny enough to be worth the price of admission. And while Chaplin has something to say, this time he successfully weaves his moralizing into the story; no lectures this time around.

Chaplin’s first three talkies, all made in Hollywood, were set in Europe. A King in New York, his first film made in his native England, is set almost entirely in the United States. (He was actually living in Switzerland, and remained so for the rest of his life.)

Like so many of the other movies I’ve explored in this Chaplin Diary, I saw A King in New York on the soon-to-be-gone FilmStruck service.

This is also the first Chaplin film, aside from some early drag comedies, where he is clean-shaven throughout. No mustache, real or fake, ever hides his upper lip.

Most of the laughs come in the first half of the film, where Chaplin satirizes something he knew very well: celebrity. He plays a deposed European monarch who lands in New York and soon discovers he’s broke (while living in a palatial suite in the Ritz). But soon he discovers that in America, fame can easily turn into wealth – especially if you’re willing to do TV commercials.

But his first foray into advertising happens without his knowledge or permission. He attends a society party, without knowing that hidden cameras are broadcasting live everything he says. Every so often, an attractive, flirtatious woman suddenly starts talking about deodorant or toothpaste, leaving him utterly bewildered. This is one of the funniest dialog sequences in Chaplin’s work. 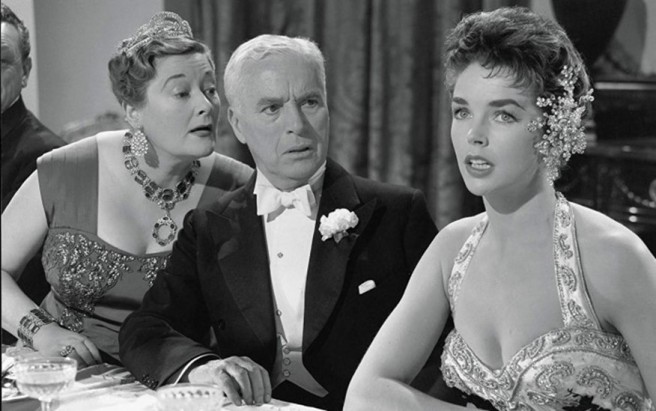 Dawn Addams play that attractive woman, and she becomes his romantic interest. As in many Chaplin films as well as in his personal life, there’s an extreme age difference. But this time, the ingenue is a successful professional, and nothing suggests that their relationship is more than a fling. After all, the King has a wife, if only an official one. American censors would not have allowed such things, but Chaplin had no intention of releasing this movie in the USA.

No longer living in the country that brought him fame and wealth, and then reviled and exiled him, Chaplin had no intention to allow his films to be screened in the USA. He uses this movie to mock his former home, and specifically the America of the 1950s. In addition to advertising, the movie gets laughs out at loud music, widescreen movies, and, funniest of all, progressive schools that hardly seem progressive at all. 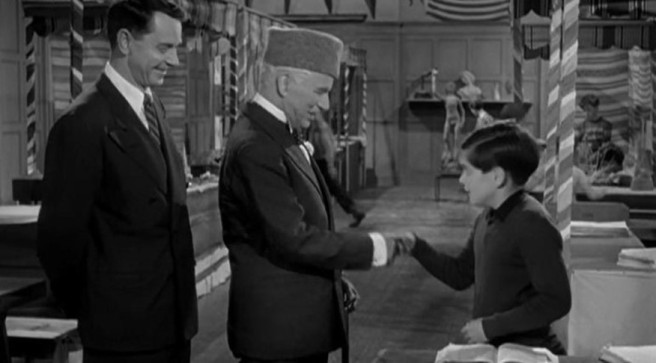 The progressive school sequence ends with a sitting-on-cake gag that should have been funnier. The Chaplin of 40 years earlier would have dragged it out, letting him almost sit on the cake several times before giving us a big surprise. But this time, it’s a modest, tired gag.

In the film’s second half, the Anti-Communist witch hunts raise their head, and the film becomes serious, although still occasionally funny. The young son of ex-Communists gets caught up in the hysteria as his parents go to prison. The boy is played by Chaplin’s own son, Michael Chaplin.

The slapstick climax, where the King douses the House Un-American Activities Committee with a firehose, disappoints. But a serious scene that follows it brings out all the heartbreak of those insane years.

It would be ten years before Chaplin would make another movie, and that one would be his last.