It was meant to be Ingmar Berman’s last film (although he ended up making another), his final statement about life, the theater, and the place of humanity in a possibly Godless universe. It’s unquestionably his most magical, one of his least grim, and in my opinion, one of his best.

He also made two versions of Fanny and Alexander. Originally intended as a miniseries for Swedish television, he reluctantly cut the four part/five-hours-and-20-minues version down to a three-hour-and-eight-minute feature film.

The new Criterion boxed set includes both, on separate discs, plus a third disc of extras. Although the long version occupies Disc 1, I’m starting with Disc 2 and the theatrical film. It’s the version I know and love.

Fanny and Alexander starts with a boy–the Alexander of the title–staring into a small puppet theater. This is a film about make-believe, about childhood, and about illusion. It’s set in a world where love abounds and people care about each other, and where ghosts interact with the living but never frighten them. But it’s a fragile world, and one parental mistake could have it tumbling around the children’s ears.

I find the title odd because Fanny barely registers as a character. But her big brother, Alexander, becomes our eyes into this world and the story’s center. Alexander has a strong imagination; he sees things that aren’t there (or perhaps others simply don’t see them), tells stories, and in one scene entertains other children with a magic lantern. In his family environment, his imagination is cherished. But when his world changes, it will cause disaster.

Alexander is clearly a stand-in for Bergman, even if the film is set ten years before the writer/director’s birth. It’s not a literal autobiography, even if it dramatizes a conflict that likely tormented the young Ingmar’s soul.

The story begins on Christmas Eve, 1907. Fanny and Alexander’s family is a large one, and they come together to celebrate the holiday with great love and boisterous joy. They’re a theatrical family, and the energy and openness that comes with that profession. The family matriarch is a financially secure, retired actress. Her oldest son, Fanny and Alexander’s father, runs the local theater. There are two other sons, daughters-in-law, additional grandchildren, and servants, and Bergman spends considerable time introducing them and letting us enjoy their company.

It isn’t all happiness, of course. There are adulteries, and one brother struggling with finances, a collapsing marriage, and his own self-loathing. Not surprisingly, he’s the only one not in the theater business. Yet he is also the one who entertains the children with his remarkable ability to fart on cue.

But the real tragedy comes after Christmas, and more than an hour into the picture, when Fanny and Alexander’s father takes sick during a rehearsal and dies soon afterwards. Foreboding, indeed. The play being rehearsed was Hamlet, and the father was to play the ghost.

And like Hamlet, Alexander watches helplessly while his widowed mother remarries 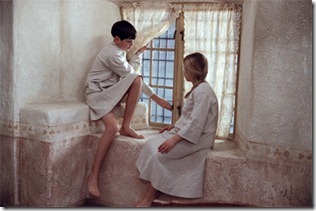 too soon, and makes a very poor choice of mate. The local bishop is an austere and serious man with strict Calvinist leanings. He lives with his mother and sister in a hard and cold house–both physically and emotionally. For Fanny and even more for the imaginative Alexander, life becomes a living hell.

It’s best if you discover the rest of the story by yourself.

Criterion did their usual beautiful job on the transfer. The film is presented with very slight pillarboxing to retain the original 1.66×1 aspect ratio; the black bars disappear entirely if your TV has even a slight overscan problem. The 1080p transfer looks sumptuous, bringing out the details of the family’s rich, creative, and happy home, as well as the coldness of the bishop’s residence.

The audio is uncompressed PCM mono. This is as good as the picture could sound and still be the soundtrack that Bergman signed off on.

This disc has one extra, a commentary track by film scholar Peter Cowie. So far, I’ve gotten about half-way through it, and look forward to the other half. Fortunately, like most Criterion titles, it supports bookmarking, so I can easily return to where I left off.

I have a confession: As I write this, trying to post this review before the disc goes on sale Tuesday morning, I have only seen about half of this version.

So far, the long version offers little additional story and considerable more atmosphere and character. In one amazing scene, Fanny and Alexander’s father entertains the children by picking up a battered chair and improvising a royal and fantastic history of its original owners. In one stunningly entertaining sequence, Bergman shows us where Alexander acquired the imagination that will get him into trouble with his future stepfather.

In the big Christmas dinner scene, this version emphasizes something that an inattentive person might not recognize in the theatrical cut. The household servants sit and socialize with their employers, a once-a-year event that nevertheless emphasizes the love that all of these people have for each other.

The mother’s decision to

remarry after the death of her beloved husband isn’t quite as sudden, here. We’re told that more than a year has gone by. Bergman makes the bishop’s early attraction to this beautiful blonde actress clear in this version, and we know that she’s grown tired of the theater and is looking for something different.

Somehow, Criterion managed to fit more than five hours of HD video onto this one single-sided Blu-ray disc. I don’t think it looks as good as the theatrical version, but I don’t have the equipment necessary to truly compare them. I may be prejudiced because I have a hard time believing that you could put so much video on one disc and not sacrifice quality.

On the other hand, this cut was made for standard definition TV. Putting it in HD on a Blu-ray makes it look better than anything Berman imagined when he cut it.

The audio is again uncompressed PCM mono, and I can’t complain.

There are no extras on this disk.

Disc 3’s centerpiece is The Making of “Fanny and Alexander,” a feature-length documentary edited by Bergman himself. Comprised of 16mm footage of the production, its only narration is occasional silent-film-like intertitles, some of them

mocking the director himself. It’s at times self-indulgent, but at other times fascinating. In its best moments, the camera follows Bergman and his cast and crew as they carefully block out a technically difficult scene. Then we see the finished shot, allowing us to associate the challenges in creating the shot with the emotional impact we experienced when we first saw the shot in context.

The disc also contains a couple of other documentaries, both made for Swedish television, plus assorted stills and the theatrical trailer.

A short book included in the box contains three essays on the film.

Ingmar Bergman was thinking about retirement when he made Fanny and Alexander (or at least semi-retirement–he continued to write screenplays and direct stage plays). Yet he made a masterpiece about youth. Criterion has done it justice.