The fall deluge of Bay Area film festivals begins to slow down around Thanksgiving. By mid-December, they usually stop completely. I can’t say for sure, but these three festivals just may be the last ones of 2018.

I’m listing them in order of opening dates.

Another Hole in the Head Film Festival 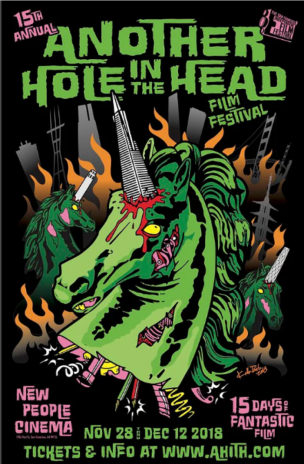 Every year, the Bay Area hosts multiple documentary, film noir, and silent (see below) film festivals. But there’s only one local festival of fantasy, sci-fi, and horror. And it runs for a full two weeks.

Along with a selection of new, unknown, and probably creepy movies, the festival will present two F/\NT/\SI/\ Live Film Re-Score events this year. They take a well-known movie, remove the soundtrack (and sometimes the color), and provide live music by The Firmament. The films are not announced beforehand. Previous shows include Mad Max Fury Road Black & White and Akira Live.

The festival opens with The God Inside My Ear. Like all the other movies in this festival, with one partial exception, I haven’t seen it. Other films with interesting titles include Nothing Really Happens, Survival of the Film Freaks, Amazon Hot Box, and Galaxy Lords.

The partial exception is I Love My Mum. I saw about a third of this alleged comedy while doing early judging for the Mill Valley Film Festival (we don’t have to see the whole movie if we don’t want to). I think the filmmakers were trying to create a sort of mother and son Laurel and Hardy movie, but they didn’t have the talent for it. I think I smiled twice.

The last three days of the festival will feature movies that don’t fit the usual fantasy/sci-fi/horror profile. I Love My Mum is one of these.

The Italian Cultural Institute of San Francisco and New Italian Cinema Events (N.I.C.E.) presents eight features and a program of two short documentaries. Most of the films are from new directors.

Once again, I haven’t seen any of the films and have no opinion of them. Among the titles you’ll find Here and Now, a comedy called As Needed, and Boys Cry, about a couple of unambitious young men who slide into a life of crime.

This is the one I’m really looking forward to.

The San Francisco Silent Film Festival provides an all-day immersion into movies that don’t need dialog but do need live music. The day starts at 10:00am with Laurel and Hardy, and will end some 13 hours later with a work of German expressionism appropriately titled From Morn To Midnight.

The opening program, The Real Stan & Ollie, contains three of their silent shorts. I can vouch for Liberty, where the inept duo find themselves in Harold Lloyd territory (way up high), and Big Business, where they go from selling Christmas trees to demolishing a car and a house. I haven’t seen The Finishing Touch, and I’m looking forward to it. Jon Mirsalis will accompany the shorts on piano.

The only other movie on the program I’ve seen is 7th Heaven, and I saw it on DVD some 20 years ago. I remember liking this World War I melodrama. It was a major competitor in the very first Oscar ceremony, winning for direction (Frank Borzage), screenplay (Benjamin Glazer), and actress (Janet Gaynor).

Here’s a bit of trivia about 7th Heaven: It’s probably the first feature film with a soundtrack recorded on the physical film instead of a phonograph. No, it wasn’t a talkie, but it had a recorded score. The Day of Silents will ignore the scratchy Fox Movietone score, and present the film with live music by one of my favorite silent film ensembles, the Mont Alto Motion Picture Orchestra.

Mont Alto will also accompany The Red Kimona, a story about a small-town teacher forced into prostitution. Pioneering female filmmaker Dorothy Davenport wrote the screenplay, from Adela Rogers St. Johns’ story, and co-directed the film. I haven’t yet seen it.

Nor have I seen Exit Smiling, the motion picture debut of stage star Beatrice Lillie, nor Jean Epstein’s Coeur Fidèle. Other musicians to play that day are Wayne Barker, and the Alloy Orchestra.