Who would shell out money and travel across town to see a movie they already own on Blu-ray? I would. Nothing you can do in your own home  competes with the theatrical experience.

Within the last 10 days, my wife and I bought tickets and crossed town to see two favorites on the big screen: The Last Waltz and Indiana Jones and the Last Crusade. I own both on Blu-ray and have enjoyed them several times at home. But as of two weeks ago, I had not seen either of these theatrically in more than 30 years. The big screen made them come alive again. 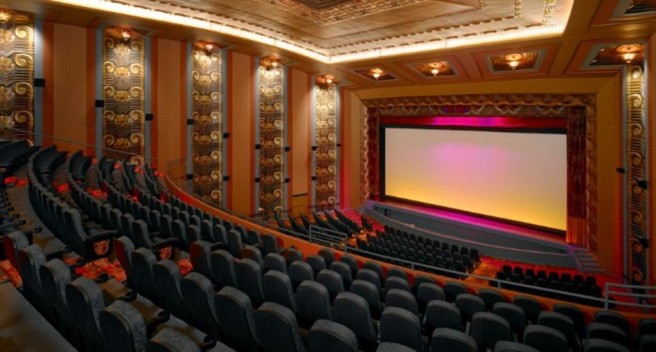 Both were projected digitally off DCPs. You don’t need physical film to have a wonderful theatrical experience.

The Last Waltz at BAMPFA

I first saw Martin Scorsese’s brilliant documentary at the Warfield Theater in 1978. After that, I saw it at least twice, maybe three times, at Berkeley’s then-best revival house, the UC Theatre. I’m pretty sure the last time was before my son was born in 1983; parenthood interferes with moviegoing. Curiously, both theaters have since given up movies and became rock concert venues.

The Band played their final concert on Thanksgiving night, 1976, with guest performers including Bob Dylan, Eric Clapton, Muddy Waters, and Joni Mitchell. Martin Scorsese brought a crew of talented filmmakers to record the show and create the greatest rock documentary ever made. Scorsese and company ignored the audience and focused on the musicians, creating an intimate look at great artists who understood that this was a once-in-a-lifetime event. Read my A+ appreciation.

Over the decades, I rented the movie on VHS once or twice. I bought the DVD as soon as it came out. I recently replaced that with a used Blu-ray. I’ve watched it in full or in pieces over the years, but nothing was like watching it at the BAMPFA.

These great musicians become godlike on the big screen – and let’s face it, the PFA screen isn’t even all that big. They tower over you. But in another way, they seem more human. One of The Last Waltz’s strengths has always been the intimacy between the musicians. But on the big screen, you can see gestures and facial details that can easily be lost on even a large TV.

I have a pretty good 5.1 sound system at home, but it’s nothing like the Meyer Sound rig in the PFA theater. The music takes over your body. When a song ends, you’re not sure if the applause was coming from the soundtrack or the audience in which you are a part.

Which brings up one of the best parts of the theatrical experience: the audience. The theater was filled with enthusiastic rock fans. Rock and roll is always better in a crowd.

It had been a long time, but I’d finally seen The Last Waltz at its best again.

Indiana Jones and the Last Crusade at the Alameda

To my mind, the third Indiana Jones movie is the best in the series. The action scenes and comedy were as good as those in Raiders of the Lost Ark. But the addition of Sean Connery as Indi’s father added another level of character and comedy. You can read my A+ appreciation.

I first saw Last Crusade in 1989 at the Century Cinema in Corte Madera. The theater’s huge and curved screen perfectly complimented the 70mm presentation. I fell in love with not only the movie, but the experience. Yet I didn’t get a chance to see it on the big screen again until just last week.

Of course, I saw it plenty of times at home. I’ve owned the movie on Laserdisc, DVD, and Blu-ray, and enjoyed watching it several times. But it’s not the same experience.

Last Wednesday, I finally revisited the movie in a theater, and a near-perfect one for the movie. The Alameda‘s Historic Theatre is a huge, beautiful, art deco movie palace that opened in 1932. Rather than cutting it up into smaller auditoriums, the owners kept the theater in one piece and built a multiplex next door. The Historic Theater’s screen is huge – I’m guessing it’s larger than the Castro‘s; at least for scope films like Last Crusade. The surround sound was very good, but not up to the BAMPFA’s.

An Indiana Jones movie should be an immersive experience; you want to feel like you’re in the picture. The Alameda’s giant screen made that possible – especially if you’re willing to sit up front (we picked the third row). My 55-inch TV can’t compete by a long shot.

Last Crusade has a lot of humor, and laughter works best when you’re not alone. The jokes work much better when other people laugh with you.

Watching it at home is just not the same thing.

Not all films need the big screen as much as these two. But even intimate dramas and documentaries benefit from a theatrical experience. To watch a film is to experience an emotional journey, and its best to have companions on the trip.