In late January, I revisited Raiders of the Lost Ark, and discovered that it didn’t really belong in my A+ List of all-time greats.

Thursday night, I revisited that series’ second sequel, Indiana Jones and the Last Crusade. It has been my favorite in the series since I saw it in first run. With a better story, considerably less racism, and the wonderful addition of Sean Connery as Indiana’s bookworm father, Last Crusade belongs in my list of great films that I’ve loved for decades – the best of the best. 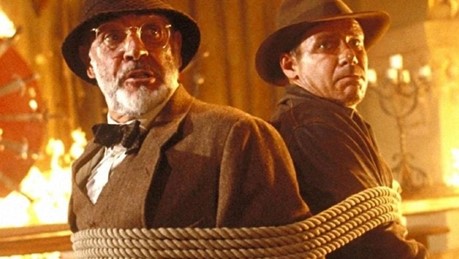 You can check out my A+ list to see what else is on it..

Like all four (so far) Indiana Jones movies, Last Crusade strings jokes and action sequences along a plot that it doesn’t even try to be believable. As usual, swashbuckling archeologist Indiana Jones (Harrison Ford) leaves his university job to find some relic that may have magic powers. But evil men are after the relic, and Indy must fight to save the world (and bring his find back home to the museum).

In Last Crusade, the relic is none other than the Holy Grail. According to Jeffrey Boam’s screenplay, whoever has the Grail will become immortal (I have no idea if there ever was such a myth outside of the movie.) A rich industrialist wants it. And since the story is set in 1938, so do the Nazis.

But the picture doesn’t start that way. The prologue, set in 1912, has a teenage Indy (River Phoenix) experiencing what is probably his first adventure. The sequence shows, in comic fashion, how he became the whip-snapping, fedora-wearing, fearless-about-anything-except-snakes adventurer we know. 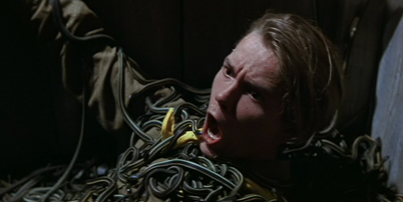 The prologue also sets up Indy’s relationship with his father, which will dominate the movie. Sean Connery plays Henry Jones, like his son, an archeologist. But the older Jones prefers to work in the library rather than in the field – especially when the field is overrun by Nazis. The relationship between the two Dr. Joneses is both touching and very funny. Henry insists on calling Indy “Junior” (the son’s real name is Henry Jones, Jr.), and Indy despises the moniker.

Father and son haven’t been close for a very long time, and their reconciliation gives the movie an emotional character arc – something that seems almost impossible in an Indiana Jones movie. There’s even a scene where the two quietly sit down and talk. This character emphasis slows down the film’s pace compared to the other movies in the series. But that’s okay, it’s nice to take a breather between the action.

Last Crusade has some of the best action scenes in the series: the chase on the circus train, the rat-infested catacombs, the boat chase, and that’s only in the first third of the movie. There’s also the fire in Nazi headquarters, the motorcycle chase, the airborne dogfight, and the tank in the desert.

Most of these action sequences have a comic component to them. Director Steven Spielberg knows how to lighten the fights with visual gags that don’t hurt the excitement and suspense. The big climax turns down the humor, and uses the father/son relationship to increase the tension. 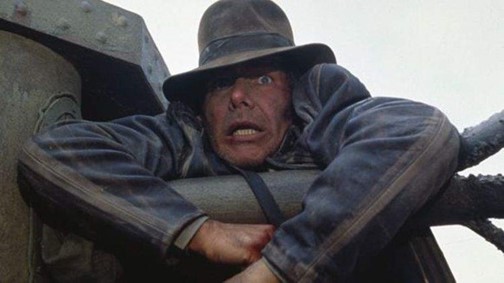 This may not sound like much, but Last Crusade is the least racist movie in the series. It still has John Rhys-Davies in swarthy makeup reprising the role of Sallah. But at least it manages to avoid offensive stereotypes.

Indiana Jones and the Last Crusade is one of those rare sequels that’s better than the original. And it’s one of the most entertaining movies ever made.