Tuesday night, I revisited Raiders of the Lost Ark, with the intention of writing it up for my A+ list of all-time favorite classic films. But as I watched it again for the umpteenth time, I couldn’t help feeling that I didn’t quite like it as much as I used to.

Which isn’t to say that I hate it. It’s still an excellent piece of escapist action entertainment. And I still love the way it actively refuses to take itself seriously. But the flaws keep coming up. I now give it an A-. 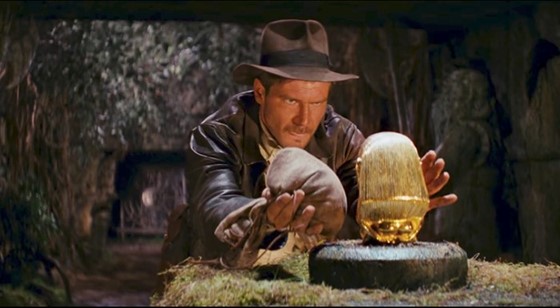 But first, let’s get the film’s two titles out of the way. Paramount released the movie in 1981 as Raiders of the Lost Ark. Some years later, producer George (“It’s perfect; let’s change it”) Lucas officially renamed it Indiana Jones and the Raiders of the Lost Ark. Thankfully, he didn’t change the movie’s opening credits to reflect the clumsier title (my guess is that director Steven Spielberg didn’t let him). So now we have one title on the DVD and Blu-ray boxes, and another up on the screen.

Raiders of the Lost Ark doesn’t really have much of a story. The plot about Nazis trying to steal the Ark of the Covenant is just an excuse to take us from one action sequence to another. But these action sequences are amongst the best filmed. They’re well-choreographed, exciting, and despite the fast cutting, completely clear. You always know who is where and doing what.

What’s more, a vein of comedy runs through these sequences, reminding the audience not to take the story too seriously. Consider Marion stealing a drink during the barroom fight. Or Indy’s tired “Wait a second” gesture during the fight around the airplane.

Nothing about the movie is realistic. When I first showed it on Laserdisc to my then young son, he asked why the natives who were shooting arrows at Indy in the dark forest stopped shooting in the open field, where they could more easily kill him. I explained that if they had, it would have been a very short movie.

Raiders made Indiana Jones one of Hollywood’s most popular action characters, and one of the most absurd. Awkward and incompetent in his day job as a college professor, he becomes a fearless adventurer in the field. It’s like Clark Kent and Superman, except that there’s no secret that they’re the same person. But unlike Superman, Indy can be hurt, although he seems to heal fast. In the truck chase, he gets shot in the arm; it doesn’t slow him down much.

These two sides of Indiana Jones make him a funnier, more interesting character, but they don’t make him a believable one. There’s really nothing inside. His fear of snakes adds another comic level.

Raiders has the best villain of all the Indiana Jones movies. Dr. René Belloq (Paul Freeman) describes himself accurately as a shadow of Dr. Jones. Like Indy, he’s an archeologist who travels to dangerous places to find historical artifacts, but Belloq is willing to work for some very evil people. The first time I saw the movie, I was disappointed when he died; I thought he’d stick around for the sequels. 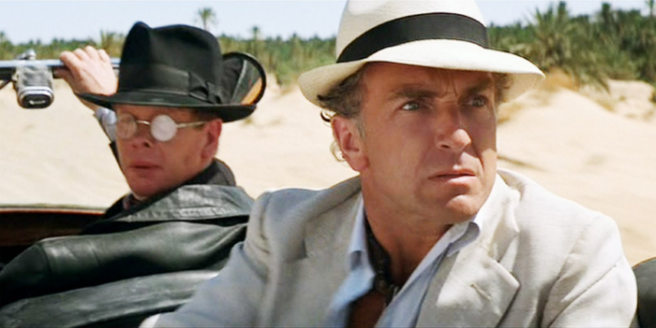 At its best, Raiders of the Lost Ark uses humor to undercut action hero clichés. In what other movie has the hero knocked out an enemy soldier to steal his uniform, only to discover that it didn’t fit? Would any other action hero leave the damsel in distress tied up in the hands of Nazis? And let’s not forget what is probably everyone’s favorite scene, when Indy shoots the Arab Swordsman (that’s the actual character name in the credits). Of course, that’s what you’d do in that situation, but movie heroes aren’t supposed to act like that.

At its worst, Raiders of the Lost Ark is a troublingly racist movie for the relatively enlightened 1980s. With the exception of Sallah (played by the Welsh actor John Rhys-Davies) the Latinos, Native Americans, Nepalese, and Arabs are just stereotypes, and often very offensive ones. The guides in the prologue are cowardly and untrustworthy. The hero steals religious artifacts their brown-skinned rightful owners, and we’re supposed to feel good about that because he’s bringing them to a museum. The Arabs are shown as a simple people. And that “Arab Swordsman” was played by British actor Terry Richards in brown face.

I’ve loved Raiders of the Lost Ark from the first time I saw it. But I actually prefer the second sequel, Indiana Jones and the Last Crusade. I’m going to revisit that one as soon as I can. Maybe that one will remain on the A+ list.