I don’t know much about this event, but it will involve vintage holiday-oriented cartoons, live music, and a buffet. I’m not even sure if you have to spend money. Unlike every other event on the Balboa webpage, there is no “Buy Tickets” link.

A+ Casablanca & A+ The Adventures of Robin Hood, Castro, Saturday

Casablanca: No one involved in making Casablanca thought it was anything but another movie coming out of the Warner assembly line. But somehow, this very conventional war-time melodrama turned out as a masterpiece. Starring Humphrey Bogart and Ingrid Bergman. Read my essay.
The Adventures of Robin Hood: My all-time favorite swashbuckler, and quite possibly my favorite light entertainment action flick. Errol Flynn was no great actor, but no one could match him for handling a sword, a beautiful woman, or a witty line, all while wearing tights. In beautiful, early Technicolor. Read my appreciation. 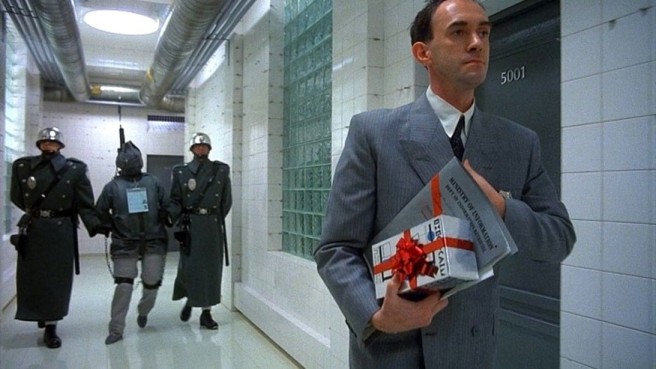 Although I’ve never seen them together, I’ve always thought that these two would make a great double bill. True, Bladerunner is a big-budget action flick, and Brazil is an absurdist satire. But they’re both set in disturbing, dystopian near futures. They were made within three years of each other. And both had trouble with studio executives and thus now exist in multiple versions. Read my Blade Runner’s final cut article and my Brazil Blu-ray review.

If the clothes make the man, what happens to the man when he loses them? Does it destroy his self-esteem? Or the esteem in the eyes of his friends and family? That’s exactly what happens in F.W. Murnau’s 1924 masterpiece, The Last Laugh, where an aging hotel doorman (Emil Jannings) must trade in his fancy uniform for a men’s room attendant’s plain coat. Read my A+ appreciation and my Blu-ray review. Live piano accompaniment by Judith Rosenberg. Part of the series Fritz Lang & German Expressionism.

A The Night of the Hunter, Castro, Wednesday, 7:30

Widow and mother Shelley Winters makes a very bad choice for a second husband–a cruel, sanctimonious, violent, and criminally insane preacher (or fake preacher) played by Robert Mitchum. Told mostly through the eyes of two children who must survive their new stepfather, the story is grim, atmospheric, frightening, and haunting. Then, in the last act, Lillian Gish shows up as a practical, down-to-earth savior of lost children. It’s some sort of Christian parallel, although I’m not exactly sure of what. Charles Laughton’s only film as a director, it makes you wish he made more. A Noir City Xmas event presented by the Film Noir Foundation.

In a sort of Japanese 12 Years a Slave, Kenji Mizoguchi once again tells us how horrible life was in medieval Japan. When an aristocrat is disgraced for treating his peasants kindly, his wife and children are set adrift and eventually kidnapped and enslaved. The Sansho of the title is an extremely wealthy and evil slaveowner and is really a minor character. Beautifully shot and tremendously sad. Part of the series Japanese Film Classics from the BAMPFA Collection.

Akira Kurosawa’s directorial debut – made during World War II but set in the 1880s – uses a common Asian martial arts plot: a young, brash, but promising pupil must be broken by his master to become a great martial artist. Sanshiro Sugata has some brilliantly-staged fight sequences – a sign of great things to come – but it lacks the brilliance of his post-war work. Another part of the series Japanese Film Classics from the BAMPFA Collection. 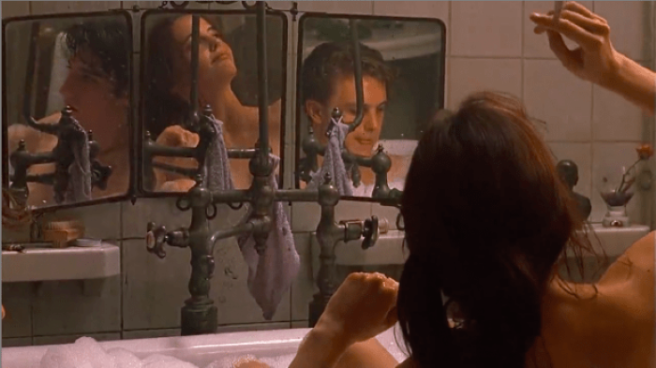 More so than even Berkeley, Paris exploded with youthful revolution in 1968. While others their age riot in the streets, three young people (Michael Pitt, Eva Green, and Louis Garrel), prefer to stay inside, smoking pot, discussing movies and Marxism, and making very close, exact, and detailed studies of each other’s naked bodies. In fact, they do the later in such detail that The Dreamers earned itself an NC-17 rating. The film works on two levels: simple eroticism, and baby boomer nostalgia for the days of sex, drugs, revolution, and passionate cinephilia. In other words, it’s not as deep as it thinks it is, but it’s still enjoyable.