In F.W. Murnau’s 1924 masterpiece, The Last Laugh, an aging man – proud of his job and the uniform that comes with it – is demoted to a lesser position by a heartless manager. It will break him.

Aside from being a powerful story centered around a great star performance, The Last Laugh is one of the most technically and artistically brilliant

films of the silent era. Murnau and cinematographer Karl Freund moved the camera in exciting and revolutionary ways, coming down an elevator, crossing a lobby, swirling like a drunk man, and distorting subjective and dreamlike images. Telling its story almost entirely with visuals, The Last Laugh has only one intertitle, although Murnau and screenwriter Carl Mayer cheat a bit with written words in memos, newspapers, and even a decorated wedding cake.

The film’s dazzling opening shows us the lobby of a large and very fancy hotel, with the choreographed movements of camera and people suggesting a well-oiled machine. Then we meet our unnamed protagonist, played by the great German actor Emil Jannings. He’s the hotel doorman and he clearly loves his work. He struts in his uniform with its big brass buttons, blows his whistle, and heartily welcomes guests. He proudly comes home every night wearing his uniform, and the denizens of his lower-class neighborhood treat him with respect.

But when a heartless manager demotes him to restroom attendant, his world collapses. Without his uniform, he has no dignity. This may seem strange to 21st-century Americans, but for Germans between the wars, uniforms meant a great deal. 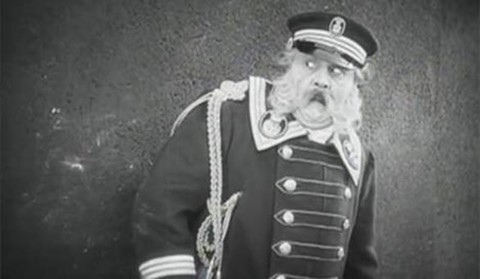 To make matters worse, the day he gets his demotion is also the day of his niece’s wedding.

(For decades, I thought the young woman getting married was his daughter, and the older woman his wife. It was only through this Blu-ray’s extras that I discovered they were meant to be his niece and the bridegroom’s aunt. I think the story is more powerful, but less plausible, if it was daughter and wife.)

By the way, that single intertitle separates the main, essentially tragic story from the comic epilogue, intended as a satire of Hollywood happy endings. The last 10 minutes or so is an entirely different movie. 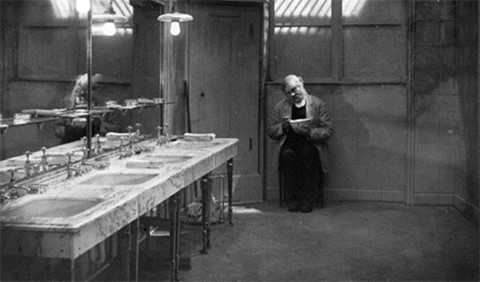 You can read more about this film in my A+ appreciation.

This Kino Classics package contains two discs – a Blu-ray and a DVD. Each contains a different version of The Last Laugh.

As was standard practice at the time, Murnau made three different negatives from various outtakes. The best one was reserved for the German theaters; the other two for international release. If you examine them closely, you can see the differences.

The Blu-ray contains the definitive Last Laugh – a new 2K restoration of the German (in other words, the best) version. Much of it came from the original negative. The written words are all in German, with English subtitles. In the newspaper sequence, the subtitles sometimes go by too quickly to read. 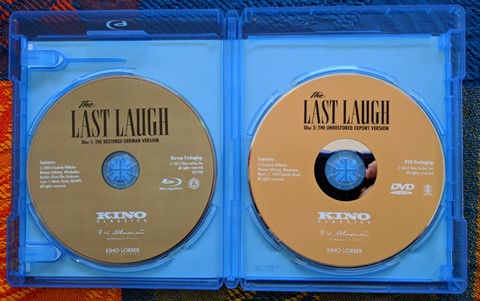 The DVD contains an older, unrestored version made up from pieces of the different versions. The written words are re-photographed in English, presumably at the time of the film’s original American release. Kino has been selling this version on VHS and DVD since the early 90s. This is more an interesting artifact than the right way to see The Last Laugh.

Kino could easily have placed both versions, and the extras, on a single disc. They chose not to.

Blu-ray: Quality varies on this 1080p transfer, but you have to expect that on a film this old. Much of it has that clear immediacy that you can get from the best digital restorations of silent films. The rest goes from very good to acceptable.

DVD: This version has not been restored, and is presented in 640p. It’s fuzzy, with a horizontal line crossing the frame near the top.

The Blu-ray offers two excellent, full-orchestra scores. The DVD has another one that isn’t quite as good.

Original score by Giuseppe Becce (Blu-ray): LPCM 2.0, 16-bit. This is the score that Murnau signed off on. Although I didn’t listen to this one all the way through, I loved what I heard. It was orchestrated in 2003 by Detlev Glanert.

Timothy Brock’s score (DVD): Dolby Digital 2.0. I generally like Brock’s scores, but this one disappointed me. The music sounds like a dirge even during happy and funny scenes.