If the clothes make the man, what happens to the man when his clothes are taken away? Does he loses his self-esteem? Or the love and respect of his friends and family? That’s what happens in the 1924 German masterpiece, The Last Laugh, written by Carl Mayer and directed by F.W. Murnau.

An aging hotel doorman (Emil Jannings) loves his job. He gets to wear a fancy uniform with big, brass buttons. He’s a member of the working class, but he dresses up, looks smart, and commands respect. And at the end of the workday, he comes home to his tenement apartment, still in his uniform, and enjoys a special status.

Then one morning he arrives at the hotel to see another doorman in his place. The manager, noting the trouble the doorman had carrying a big trunk, has decided that he’s too old for the job. He’s given a new job: washroom attendant. He’s so ashamed he steals his old uniform, and wears it home. He can’t even tell his family.

Silent films didn’t get any more silent than The Last Laugh. It tells almost everything visually, without benefit of language. The film has only one intertitle, separating the main story from the epilogue (more on that below). Occasionally Mayer and Murnau help the story along with an official document or a written, cake decoration, but I don’t think that happens more than three times in the movie. Everything else is told by visuals and pantomime.

You don’t miss intertitles any more than you would miss dialog.

A lot of the credit for that visual storytelling has to go to cinematographer Karl Freund. His amazing moving camera shots, in-camera special effects, and work with glass and mirrors tell the story as well as the acting and the magnificent, expressionistic sets.

Although The Last Laugh is set in a big, German city, and was shot in Berlin, you never see the real Berlin in the movie. Every shot in the picture was made in the UFA studios.

And let’s not forget Jannings’ contribution. Arguably the greatest film actor of his time (he would later win the first Best Actor Oscar), he plays the role oversized–that was German expressionism–but emotionally real. He takes the unnamed lead character’s journey from egotistical fool to broken object of pity–rejected by even his own family. A very sad ending, indeed.

Which brings us to that epilogue. Warning: Mild spoiler below. You may want to skip to below the photo.

The studio heads didn’t like the original ending. It was too depressing. So the director added a ridiculous, funny, unbelievable, happy-in-the-extreme ending. And to make sure that everyone understood his intent, he separated the main story from the ending with the film’s only intertitle–which basically acknowledges that this ending is tacked on and absurd.

It’s a brilliant way to end this essentially tragic film. You understand that life is hard and will grind you down, and that the happy ending is there only for commercial purposes. You get to laugh a lot in those last few minutes, and by and large you’re laughing with the main character. And even though you know it’s absurd, it still leaves you with a smile. 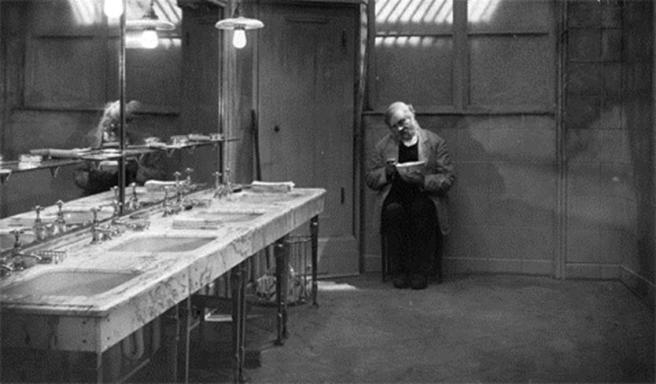 Okay, you can safely continue reading:

I first saw The Last Laugh on PBS in the early 1970s, when I was a teenager, newly besotted with my love of silent films. I knew it was fantastic even then.

I saw it again a few years ago, on DVD. I still loved it.

Last Friday, I finally saw it on the big screen, with live accompaniment and a large audience. That did it. Better able to appreciate the expressionistic sets, and sharing the film’s emotions and laughs with hundreds of other people, I finally realized that this isn’t just a great film, but a rare one.

One thought on “The A+ List: The Last Laugh”