I planned to report on every day and every screening I attended at the San Francisco Silent Film Festival. But that was just too much. So this year, I’m waiting to the end and discussing the highlights.

But first, one serious lowlight. When it comes to reserving seats, the Silent Festival is getting almost as bad as the San Francisco International Film Festival. A huge block of rows–comprising the center of the house where most people prefer to sit–was blocked off with Reserved signs. For Sherlock Holmes, they extended the Reserved section so far forward that even the fifth row was out of bounds for most ticket buyers and pass holders.

Okay, now on the good parts.

Few festivals are as fun as this one between the movies. If you have a pass or a ticket to the next show, you’re welcome to hang out, shop for books and DVDs on the mezzanine, or just talk to people.

And the people you can talk to are pretty amazing. When I came in Friday morning, Kevin Brownlow, Serge Bromberg, and Grover Crisp were within about six feet of each other. A collapsing chunk of ceiling would have set back the cause of film preservation for decades.

Another example: A friend of mine, at the festival for the first time, talked about a silent movie he remembered fondly–The Way of All Flesh. He wondered how he could see it again. As he was talking, who should walk by but Serge Bromberg, who joined in the conversation. Bromberg explained that, aside from one reel, the film is believed lost. (He also mentioned a Charley Chase short comedy made soon afterwards called The Way of All Pants.)

The talks–introductions, Q&A, the Amazing Tales from the Archives show–contained a lot of talk about preservation and restoration. We heard multiple stories about reassembly and re-translating intertitles (a lot of American silents exist through foreign, non-English prints). We viewed recently discovered early Technicolor from Hearst’s Castle. And Serge Bromberg–who seemed to be everywhere this year–told us a long and funny story about acquiring the large collection of a family of total jerks.

One running gag ran throughout the festival. Anyone on stage soon learned they could get applause by saying “35mm,” “nitrate,” or, for a really big reaction, “35mm nitrate.”

So much for atmosphere. Here are my favorite films and presentations at this year’s Festival: 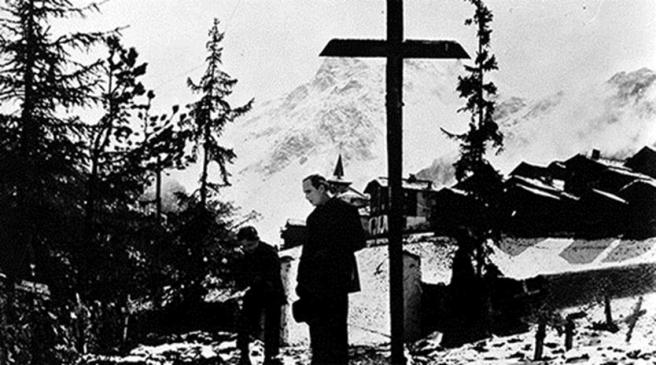 I had never heard of this film before I read the program, so I was in a good place to be blown away. It sounded interesting, but I didn’t know until it started that I was watching a masterpiece.

Set in a small town high in the Alps, in what appears to be the last 19th century, Visages d’enfants follows the difficulties of what is now called a blended family–and–as is so often this case, it wasn’t blended very well. A widower with a son and daughter marries a widow with a daughter. Bullying, anger, and complicated emotions result.

I don’t believe I have ever seen such good child performances. The kids come off has real kids, with their own joys, angers, and issues. I grew up in a poorly-blended family myself, and this film hit every nerve.

One major flaw: The movie climaxes with not one but two nail-biting cliffhangers. That works for Harold Lloyd, but for a realistic story like this one, that was one too many.

Stephen Horne provided accompaniment on piano, flute, and I’m not sure what else.

This was my third time seeing F.W. Murnau’s 1924 masterpiece, and my first time seeing it theatrically. I loved it from the first, but this time around, with a big screen, a full audience, and great, live music, I realized that this is A+ material.

An aging hotel doorman (Emil Jannings) loves his job. He gets to wear a fancy uniform with big, brass buttons. He’s a member of the working class, but he dresses up, looks smart, and commands respect. And at the end of the workday, he comes home to his tenement apartment, still in his uniform, and everyone respects him. Then he’s demoted to washroom attendant. He’s so ashamed he can’t even tell his family.

Silent films didn’t get any purer than The Last Laugh. It tells almost everything visually, without benefit of language. The film has only one intertitle, separating the main story from the epilogue.

The music came from the Berklee Silent Film Orchestra–an undergraduate program in film scoring at Boston’s Berklee College of Music. Several students worked on composing this score, and they took turns at the baton. That sounds like a recipe for disaster, but it was anything but.

There was one problem with the music. From where I was sitting, the conductor’s head blocked the bottom of the screen, and thus the subtitles. On the other hand, you’d find few foreign films with less need for subtitles.

This was, of course, the movie we were all waiting for–newly found and restored after sitting in a French vault for almost a century. It’s the only filmed performance by the great stage actor William Gillette–the first playwright and actor to make the famous detective his own.

By the time Gillette shot Sherlock Holmes in 1916, he’d been playing the part onstage on and off for some 17 years. And even without hearing his voice, you can see that he was a great Holmes. He brings an insolence and an air of sarcasm to the role, making him a very modern hero.

The film’s faults come primarily from the stage play, and from its adaptation to the screen (or lack thereof). It appears that the filmmakers simply filmed the play, then added a few intertitles. Much of the time, you’re watching people talk, without any hint of what they’re saying.

And the play has its own problems. For instance, Holmes falls in love, and presumably is heading towards marriage at the final curtain (or fade out). I’m sorry, but Sherlock Holmes does not fall in love. 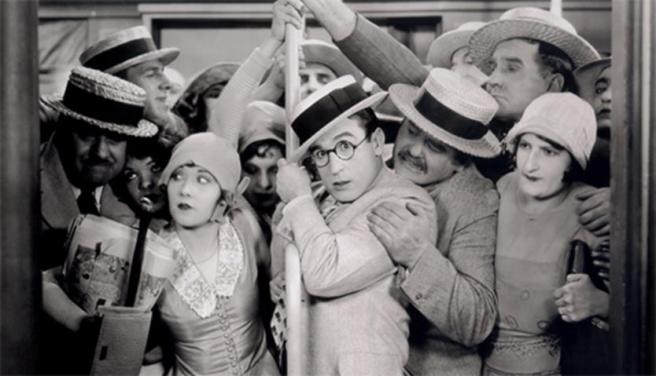 Harold Lloyd’s silent features tend to fall into two categories: Very funny, and really good stories that are also very funny. I prefer the second category. Lloyd’s last silent film falls into the merely very funny group, and was thus never one of my favorites. The story is weak and meandering, and Lloyd’s character is an absent-minded failure who can’t hold a job. But seeing it for the first time on the big screen, with an audience around me, I realized just how funny Speedy is. And believe me–it’s extremely funny.

Much of it was shot in New York City, and Lloyd’s team had a lot of fun with the locations. There’s a long sequence at Coney Island that makes me want to visit the place–or at least visit the Coney Island of 1928. Babe Ruth has a cameo as himself. And the final chase is one of Lloyd’s best.

This had to be the weirdest thing at the festival. For one thing, it’s not really a silent movie. At best, it’s an “accidental silent,” as Bruce Goldstein described in his introduction.

It was made as a talkie (Frank Capra’s first). We have the picture, but the soundtrack is lost. So it was screened with live actors lip-synching–usually accurately–the dialog onscreen. Oddly enough, after a few minutes getting used to the experience, it worked. There was also piano accompaniment and sound effects.

The movie is a very silly murder mystery–I believe the laughs were intentional. I don’t think this type of presentation would work with a serious film.