Painful, frightening, outrageous, lyrical, beautiful, and terrifying despite the happy ending promised in the title, 12 Years a Slave reminds you of what cinema is supposed to be about. This is easily the best new film I’ve seen this year. I suspect your children’s children will know about it. I certainly hope so.

It’s based on a true story. In 1841, con artists kidnapped Solomon Northup–a well-educated, free-born African American living in upstate New York–and sold him into slavery down south. He went through several circles of hell before he was finally located and reunited with his family in 1853.

His story makes an excellent vehicle for a dramatic study of American slavery. Because Northup (Chiwetel Ejiofor) is a free, reasonably prosperous family man, today’s audience can easily identify with him. And because he’s learning firsthand about the horrors of slavery, we learn with him. He’s a perfect example of what John Sayles’ calls an “entry character”–someone who can bring us into the story because he too is an outsider.

And Ejiofor carries the film in an Oscar-worthy performance. He’s in every scene, sometimes at its center and sometimes as an observer. He’s homesick, exhausted, and must hide his identity and abilities (a literate slave would be severely punished). At times he tries to improve his situation, Other times he tries to help others. But more often than not, he just struggles to stay alive. 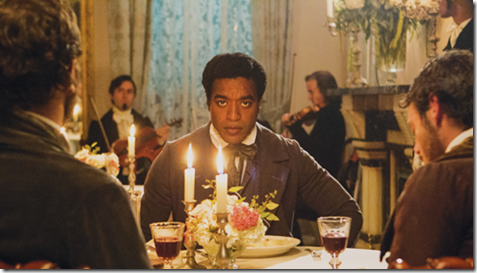 Ejiofor is one of several British actors in this very American story (director McQueen, like Ejiofor, is a black Englishman). Another Brit in the cast is Benedict Cumberbatch, playing the kindest of the masters that at some point “own” Northup. He tries to talk a slave trader out of separating a mother and child, and protects Northup from a particularly vicious overseer (Paul Dano). But in the end, he’s just another cog in the machinery of evil. When Northup tells him that he’s really a free man, the master cuts him off and doesn’t want to hear any more. Just like the rest of us, his own financial needs come first.

Michael Fassbender plays the thoroughly evil master for whom Northup works for most of his captivity. At times he’ll put an arm around a slave and talk to him like a friend. But he can turn on that “friend” with terrible swiftness, and has slaves whipped for not picking enough cotton. When he and his wife want some entertainment, he wakes up some of his slaves–all exhausted from a hard day in the fields–and orders them to dance.

He also has a mistress of sorts, a young piece of property named Patsey (brilliantly played by newcomer Lupita Nyong’o). Her life is unimaginably horrible. Her master frequently comes to her slave quarters and rapes her. And her master’s wife viciously hates and attacks Patsey for a fate beyond her control.

Unlike many young directors, McQueen doesn’t go crazy in the editing room. He built 12 Years a Slave as a series of long, leisurely shots, often handling whole scenes without a cut. This editing (or non-editing) style works most effectively in the many scenes of whipping and other tortures. In one particularly effective scene, Northup is hanged by the neck, with just enough slack so he stand on his toes and breath. For what seems like forever, the camera just sits there, observing his suffering and the people who walk by trying not to look. By refusing to cut, McQueen gives you no escape from the atrocity in front of you. Most of these torture scenes focus on the victim’s face, not the gory details, and are all the more effective for it.

And yet, this is often a visually beautiful film. These horrors take place in lush, green meadows and near flowing rivers. McQueen often picked some unusual camera angles, but they never seemed there for show.

The film’s weaknesses are minor. I never really felt as if 12 years were going by (two years, maybe). And the pre-kidnapping scenes set in upstate New York and Washington D.C. make those places look like paradises of racial equality. Perhaps that’s how Northup saw them–especially when he wrote his memoir soon after his ordeal.

Despite the beautiful photography, a star-heavy cast (which also includes Paul Giamatti, Alfre Woodard, and Brad Pitt), a protagonist you can’t help rooting for, and a historically accurate happy ending, this is not an easy film to watch. But nevertheless, everyone should see it.