Aside from the obvious, here are a few worthwhile films screening in Bay Area movie theaters this week.

A After the Wedding, Embarcadero Center, opens Friday

Two of our greatest American actresses, Michelle Williams and Julianne Moore, clash and make beautiful drama together in this story about different ways of being a mother. You rarely see what’s coming. Someone seemingly calm and composed suddenly turns angry. When you would expect two characters to jump into bed together, they keep their distance. Wonderful and horrible things happen in After the Wedding, but – for the most part – they’re not the wonderful or horrible things that moviegoing has taught you to expect. Read my full review.

The final third of this Australian film, set and shot in Afghanistan, just may bring tears to your eyes. But then, maybe not. You’ll have to sit through the dull and unbelievable other two thirds first. The guilty hero travels to a remote village to make amends. Most of the film covers his dangerous yet farfetched journey to the village. In the last minutes, we discover that he could have taken the bus. Read my full review.

You can see Francis Coppola’s talent melt away in his Vietnam War adaptation of Conrad’s Heart of Darkness. The original version is brilliant until Martin Sheen reaches his destination and the whole movie collapses under its (and Marlon Brando’s) weight. I give this version an A-. The second version, Apocalypse Now Redux, lengthened the film by adding more bad scenes. I give it a B-. And now Coppola gives us the Final Cut, removing some, but not all, of the bad Redux stuff. I haven’t seen this version. The New Mission screening is part of the series IN THE CUT: Six Restored Director’s Cuts.

Any collections of American cartoons from the 1920s through the ’50s are bound to be fun. According to the Roxie’s website, the characters in these particular cartoons revolt and behave badly. The titles include Felix Revolts (1923), Rough on Rats (1933), Fighting Tools (1943) and Bad Luck Blackie (1949). To be screened in 16mm, which is not the way they were intended to be shown.

A+ The Life and Death of Colonel Blimp, Stanford, Saturday through Tuesday

Clive Wynne-Candy is an officer and a gentleman. A career soldier in His Majesty’s army, he believes in following the rules of combat–even against an enemy willing to commit atrocities. The Life and Death of Colonel Blimp follows Wynne-Candy from his dashing youth to a somewhat foolish old age. Filmmakers Michael Powell and Emeric Pressburger provide warmth, heartbreak, laughs, and several viewpoints on what it means to be a soldier and a decent human being. Read my essay or my Blu-ray review. 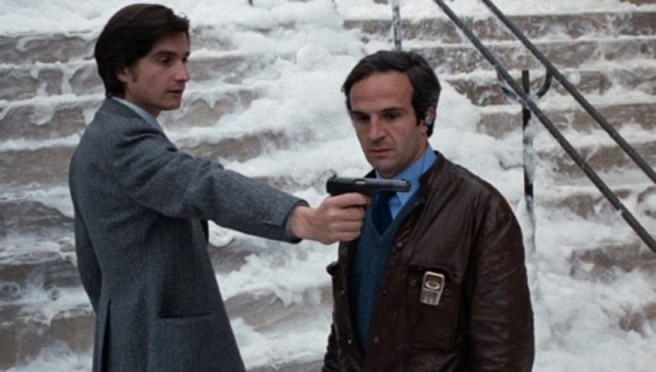 François Truffaut’s love letter to all the pain and joy of cinema. Truffaut himself plays a director shooting a romantic tragedy in Nice, and everything goes wrong. Extras don’t move as they should. An alcoholic actress makes the same mistake take after take. A kitten refuses to go to a saucer of milk on cue. And, of course, people constantly fall in and out of love – or maybe just lust. A sweet, warm comedy most of the time, the tone turns effortlessly serious in the last half hour. The cast includes Jacqueline Bisset as an international star and Jean-Pierre Léaud as a hopelessly immature leading man. Part of the series Jean-Pierre Léaud at 75.

The most-loved Star Trek movie excites and entertains, allowing all the seven original cast members and their characters get a chance to shine. On its own, Khan has everything you would want in a Star Trek movie. But when presented by Oasis and hosted by D’Arcy Drollinger, with Leigh Crow and the Cast of Star Trek Live, the live show will decidedly be a drag (in the good way).

Based on Philip K. Dick’s novel Do Androids Dream of Electric Sheep, Blade Runner remains surprisingly thoughtful for ’80’s sci-fi–especially of the big budget variety. It ponders questions about the nature of humanity and our ability to objectify people when it suits our needs. The art direction and music alone would make it a masterpiece. Read my longer essay. On a double bill with Tron, which I saw when it was new and enjoyed only as a light show.

Hitchcock’s penultimate movie isn’t up to his best work, but it still has that special touch. This innocent-accused-of-murder thriller, set and shot in his native England, harkens back to the low-budget potboilers that first made him famous. It’s also his only R-rated film, and it’s interesting to see what he did without the confines of censorship. On a double bill with The Boston Strangler, which I haven’t seen.

B The Searchers, Sebastiani, Monday, 7:00

A bitter and racist Civil War veteran (John Wayne) spends years searching for his niece, kidnapped by Comanches. At first, he wants to save her, but as the years go by, he starts talking about killing her, because she’s now “more Comanch than white.” The movie looks splendid, has many great moments, and an unforgettable closing shot. Most John Ford fans consider it his masterpiece. I disagree. I find it marred by a rambling plot and a very unlikable protagonist (probably Wayne’s least sympathetic character).