Two of our greatest American actresses clash and make beautiful drama together in After the Wedding. What else can you expect when you put Michelle Williams and Julianne Moore in the same movie. Adding Billy Crudup to the mix makes it better yet. Writer/director Bart Freundlich brings them altogether is one of the best dramas of the year.

Williams plays Isabel, an idealist who lives by those ideals, running an orphanage in India. She reluctantly goes to New York in hopes of getting a large donation from Theresa, a very wealthy and successful entrepreneur (Moore). We never truly learn exactly what the company she created does – aside from bringing her a boatload of money.

If you want to boil this down to conventional theater, Isabel is the protagonist and Theresa the antagonist. But those labels don’t really fit these characters. The film looks at the ways in which two essentially good women live out their maternal instincts in unusual situations.

When they meet, Theresa offhandedly invites Isabel to her daughter’s wedding – a very strange way to start a business relationship. And it’s at the wedding that something in their separate pasts begin to unravel. Is this by coincidence or design? Let’s just say that things are going to get complicated.

Crudup plays Theresa’s husband Oscar. He’s an artist. If he hadn’t married a rich woman, he’d probably be a starving one. Crudup also gives a very good performance, but the screenplay doesn’t give him the range that Williams and Moore get. 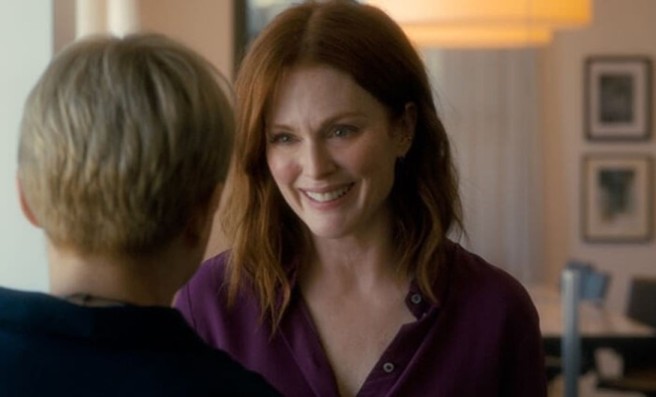 When Theresa finally sits down with Isabel to talk business (or, more correctly, charity), she delivers good news and bad. She’s willing to donate a fortune – many times what Isabel was expecting. But she insists that Isabel must administrate the orphanage from New York – a city she hates. She kicks off her shoes and runs down many flights of stairs barefoot in her anger.

If nothing else, After the Wedding shows us what you need to make an excellent work of cinema: a terrific screenplay, three great actors, and no clichés.

After the Wedding opens Friday at the Embarcadero Center and the CinéArts at Palo Alto Square. It will open in other Bay Area theaters in subsequent weeks.

One thought on “Life becomes complicated After the Wedding”