I’ve already told you about Modern Cinema and the San Francisco Jewish Film Festival (although there’ll be more to say on that one). But there are two other festivals competing for your attention next month – and both over the same weekend.

Every year, the Niles Essanay Silent Film Museum sets a weekend aside to celebrate the most famous and popular (and for a while quite hated) movie star of all time. There’s a real connection between Chaplin and the museum. The comedian/filmmaker worked for Essanay early in his career and made four short comedies in Niles.

This year’s Charlie Chaplin Days contains only one feature, and It’s his first: The Kid. This seriously-flawed masterpiece contains scenes of near-perfect, roll-on-the-floor comedy. The loving relationship between Charlie and his adopted son (six-year-old Jackie Coogan) provides the film’s heart. You laugh more because you care for these people, and you care more because they make you laugh. But you can also feel Chaplin trying to stretch the story to feature length. Read my Chaplin Diary entry.

The Kid will screen Saturday, July 14, at 7:30, with live piano accompaniment. David Totheroh, the grandson of Chaplin’s cinematographer, will introduce the film.

There will also be several shorts screened over the weekend. These include The Champion, One A.M., and The Tramp,

But what really makes this weekend unique are the wealth of lectures, presentations, and special events, including:

On Saturday, the 14, the Lark will run a one-day festival with a southwestern flavor. And yes, I do mean flavor in a literal as well as a figurative sense. A food truck will provide Wester-style cuisine in the evening.

Cinema Santa Fe screens three feature films and one selection of shorts. Among the features is the Dorothea Lange documentary Grab a Hunk of Lightning. 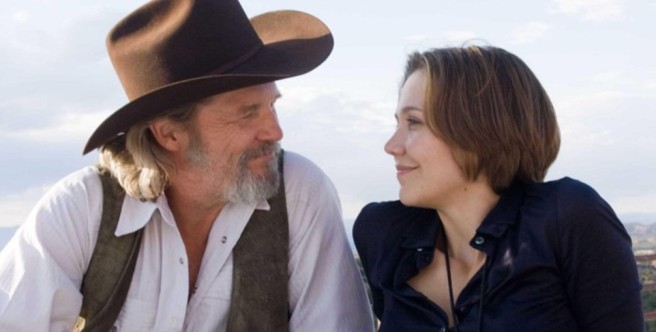 I’ve seen only one of the movies being screened: Crazy Heart. Jeff Bridges earned his Oscar for this role as an alcoholic, once-famous country western singer on the skids. His Bad Blake drives from town to town in an old truck, playing in small bars and enjoying the occasional company of aging groupies. Not that he’s without friends. His still considerable charm helps him win the love of a young reporter and single mother who knows better (Maggie Gyllenhaal). And a now-successful former protégée (Colin Farrell doing a believable American accent) tries to help rejuvenate his career. But alcohol and self-loathing make him a difficult man to help. With excellent songs by T-Bone Burnett.

I give Crazy Heart an A-.