Big news! BAMPFA will be screening movies in August. But this week, you can see Uncut Gems, Barbara Lee (who’s something of a gem, herself), The African Queen, and Mulholland Dr.

The museum part of the Berkeley Art Museum Pacific Film Archive has been open for a while. Finally, they’ll be screening films – first on the giant outdoor screen, and eventually into the Barbro Osher Theater. The screenings will start with the documentary Barbara Lee: Speaking Truth to Power (see below),  following with Sisters with Transistors and Crip Camp: A Disability Revolution. There will be more outdoor documentaries in September. And in October, the indoor theater will open for the Mill Valley Film Festival’s Berkeley branch.

How do you react to an extremely well-made film that feels like fingernails on a chalkboard? Adam Sandler, proving again that he’s better at drama than comedy, plays a New York gem dealer with a very interesting stone. But he’s also an untrusty wheeler dealer with a gambling addiction who has a habit of doing the wrong thing and getting the wrong people angry. And yet, you can’t take your eyes off him. In one brilliant scene, he’s called on to read the ten plagues at a Passover seder, and you feel that he’s all ten of them rolled up into one useless human being.

I’ve been voting for Barbara Lee for decades, and I intend to continue doing so. But it’s nice to learn more about my congresswoman and to discover her interesting history. She was born in Jim Crow Texas, had two bad marriages, one of which left her homeless with two young boys. She worked with the Black Panthers. When George W. Bush called for complete control going to war, she was the only Congress member to vote against it. And yet, she later worked with Bush to help people with AIDS in Africa. It’s a conventional documentary, but it taught me a few things. Q&A after the film. 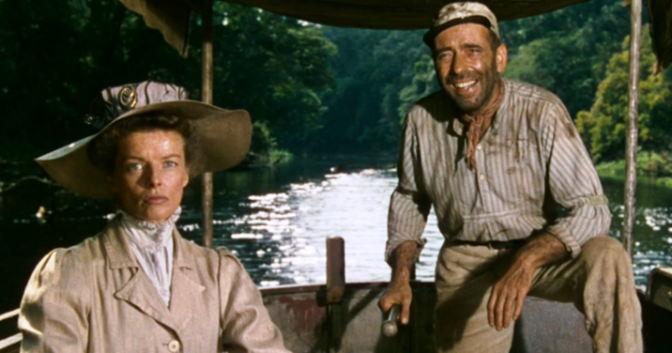 Humphrey Bogart, Katharine Hepburn, Africa, and Technicolor all make for splendid entertainment in John Huston’s romantic comedy action adventure. The start of World War I traps an earthy, working-class mechanic (Bogart) and a prim and proper missionary (Hepburn) behind enemy lines and hundreds of miles of jungle. It’s a bum and a nun on the run, facing rapids, insects, alcohol (he’s for it; she’s against it), German guns, and an unusual (for Hollywood) romance between two moderately attractive middle-aged people in filthy clothes. See my Blu-ray review.

Screened in 35mm! The plot is both extremely conventional and almost non-existent, and I’m not even going to try to explain it. And yet almost every individual scene seems to feel like a masterpiece. As you expect from writer/director David Lynch, it’s heavy on atmosphere, complexity, and erotica. You can almost reach out and touch the weirdness. Naomi Watts is just amazing. Even Ann Miller of the old MGM musicals plays a part.