I’ve been busy with the SFFilm Festival all last week, so this is a short newsletter. But we’ve got Minari and Little Miss Sunshine at the drive-in. Also three (virtual) film festivals and, best of all, theaters preparing to open.

The Alameda opens today with Godzilla vs. Kong, Nomadland, Raya and the Last Dragon,
Tom and Jerry, and Wonder Woman 1984.

The Roxie has finished its first round in selecting which movie will reopen the theater. Now it’s time for the second round.

Rialto Cinemas, which runs the Cerrito and the Elmwood, is still running it’s Reopening Survey. Add your opinion.

Free! April is unofficially Earthquake Remembrance Month in the Bay Area. This weekend, the Museum will offer films and discussions about what happened in 1906. They have a beautiful 4K transfer of A Trip Down Market Street (shot days before the earthquake), a collection of movies of the aftermath (with music by Greg Pane), a KQED program about the event, and much more. 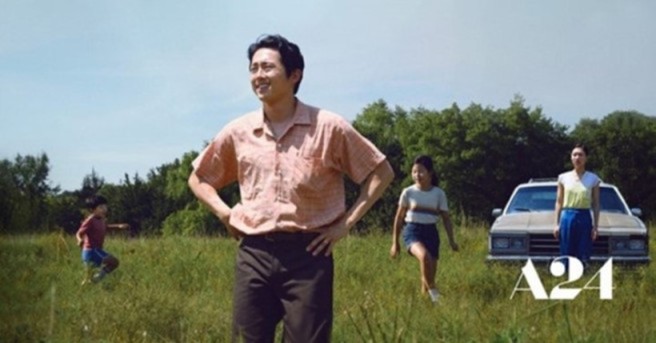 A Korean family just moved from California to Arkansas, where they can afford to buy land for a farm – the father’s dream. He’s a hard worker and knows farming, but he’s overly optimistic. Problems come up without good solutions. The marriage becomes strained. The young son has a heart condition that could be fatal. Surprisingly, they don’t have problems with racists; the local, apparently all-white church welcomes its new neighbors. But you might want to read my comments about the tech hell I experienced to watch the movie (not a problem at the drive-in).

I’m glad this movie is a comedy; a drama with these characters would be unbearably depressing. Little Miss Sunshine puts a supremely dysfunctional family on the road in a broken-down VW bus, with the goal of entering their prepubescent daughter into a beauty contest for girls too young to have any business with such things. The result opens a window into the souls of four damaged adults and two youths destined for damaged adulthood, while delivering a steady stream of strong, deep, and sustained laughs.