A- Drama
Written and directed by Shatara Michelle Ford

Test Pattern is not about old-fashioned television. It’s about date rape, and how that affects everyone involved – except, perhaps, the rapist.

This is the second film I’ve seen in the last few weeks about date rape. I liked Test Pattern and Promising Young Woman very much, but they take very different approaches to examine the issue. Promising is an intentionally unlikely fable about turning the tables on almost the entire male sex. What happens in Test Pattern, unfortunately, happens every day.

Renesha (Brittany S. Hall) seems to have it all. She’s young, beautiful, and seems to be going up the ladder of success. The fact that she’s a Black woman doesn’t seem to be a problem for this up-and-coming executive. A quick, early flashforward shows us that something horrible is in her future.

But for now, things are going great. Renesha has met Evan (Will Brill), and they’re very happy together. He’s a laid back tattoo artist who likes his job and doesn’t have Renesha’s type of ambition. He’s also a great cook. Evan is white. Is that important? Early on, at least, I didn’t see it so.

But things go bad when Renesha goes out with her best friend, Amber (Gail Bean). I can’t help wondering why writer/director Ford gave Amber that name. It reminds you of Amber Alerts. Renesha offered Evan to join them, but he chose to stay home; he’s going to regret that.

The two women drink a little too much. Two guys come over and start flirting with them. Then they continue drinking too much. The men fill the women’s glasses and share some edibles. The women are in no condition to drive, and Renesha spends the night with one of the men – in a near comatose condition.

The story really gets into gear when Renesha comes home. Evan isn’t mad – or at least he’s very good at hiding it. He’s the one who insists that Renesha must go to a hospital, and that’s when Evan discovers how the medical system really works. Going from one hospital after another, it seems impossible to get both a rape kit and somebody trained to use one. The first hospital charges them four figures for being told that they can’t help. Meanwhile, Renesha carries around an open, plastic cup containing her first pee of the day (something needed for the tests). 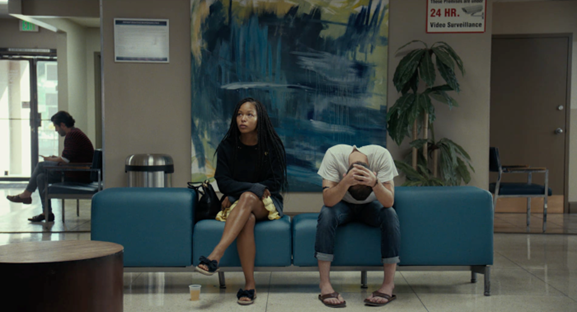 Is it because Renesha is Black and therefore not as important as a white woman? Or does the interracial relationship upset people and give them worse service.

And meanwhile, Evan is getting angrier and angrier about the lack of treatment, while Renesha just wants it to be over with. There’s no big ending, good or bad. Unlike most movies, Test Pattern doesn’t wrap things up cleanly.

Via Virtual Cinema, you can stream Test Pattern now via the Sonoma Film Institute. As of Friday, you can also stream it through the Roxie. I should mention that Kino Lorber, Test Pattern‘s distributor, makes Virtual Cinema relatively easy.