Crime by Scorsese, Coppola, and Zhangke Jia, solved by Sherlock Holmes. Comedy by Mel Brooks and Jacques Tati. Boxing and amnesia. Plus a Chinese Western and two film festivals. All that and more on Bay Area movie screens this week. 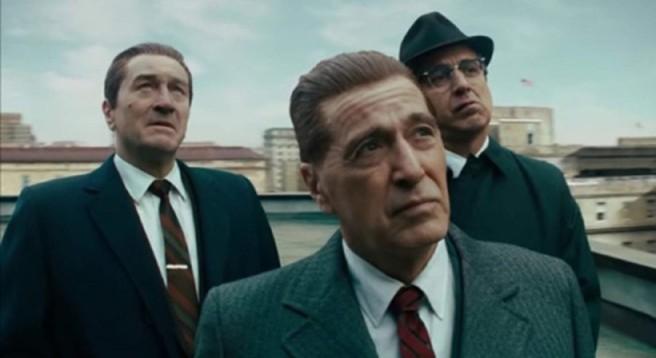 Martin Scorsese gives us an intimate story of gangster friendships set over multiple decades and based on historical people and events. Robert De Niro plays Frank Sheeran, who goes from truck driver to mob enforcer. The Bufalino gang comes off as a tight brotherhood of friends who protect and love each other – until one of them must kill one of the others. Al Pacino plays Jimmy Hoffa as a dangerously mercurial businessman and thug, flipping from affection to anger. Warning: The film runs almost 3½ hours without an intermission. Read my full report.

At first you think this is going to be a gangster movie. Or maybe a revenge flick. Slowly, you realize it’s something much more subtle. A young woman saves her gangster boyfriend and gets five years in prison for doing so. When finally freed, the boyfriend has moved on and the film becomes her after-prison journey through modern China. But it could not have worked at all without Tao Zhao’s subtle and complex performance. Read my full review. Part of the ongoing series Limited Engagements & Special Screenings. 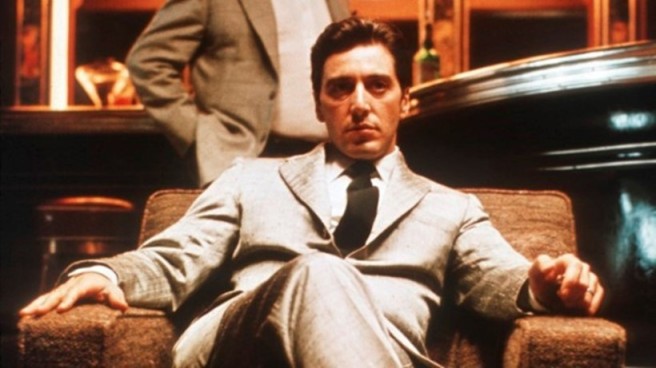 By juxtaposing the material rise of Vito Corleone (Marlon Brando in the first film, a young Robert De Niro here) with the moral fall of his son Michael (Al Pacino again), Mario Puzo and Francis Coppola show us the long-term effects of what seemed like a good idea at the time. De Niro plays young Vito as a loving family man who turns to crime to better support his wife and children. But in Michael – consolidating his empire some thirty years later – we see the ultimate disastrous effects of that decision. Pacino plays him as a tragic monster who senses his own emptiness. Read my A+ appreciation. 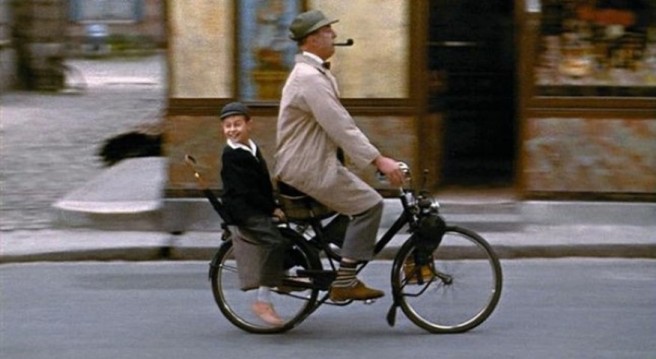 English language verison. This may be the funniest visual comedy made since the death of silent film. The slight story finds filmmaker Jacques Tati’s onscreen persona, Monsieur Hulot, dealing with relatives. While his mischievous little nephew falls for his unconventional uncle, the boy’s wealthy and image-conscious parents are none too happy with the unemployable Hulot. It’s just an excuse for wonderful, loopy comedy of that quiet Tati style. Elaborate sets parody modern architecture and furniture. Part of two series, Jacques Tati: Comedy as Choreography, and the ongoing Movie Matinees for All Ages.

Martin Scorsese put a cap on 70’s cinema with this study of boxer Jake La Motta. It isn’t an easy film to watch; the experience is not unlike a fierce pummeling. But it’s worth it. Robert De Niro gives one of the great physical performances in cinema, changing from a taut athlete to a man who has let himself go, and always making things difficult for the people close to him. Scorsese and cinematographer Michael Chapman make brilliant use of black and white, allowing us to experience the emotional brutality of the fights. On a Scorsese double bill with Mean Streets, which I really must revisit one of these days.

Harry Dean Stanton gives a masterful, understated performance as an amnesiac who walks out of the desert and back into the lives of his family. Missing for years, he’s taken in by his brother’s family, which now includes his own son. As the man’s memory slowly returns, he becomes obsessed with earning his son’s love and finding out, not so much the mystery of his own disappearance, but that of his wife’s.

New 4K restoration! This low-budget Chinese western succeeds in making you feel good, while reminding you how badly Asians were treated in 19th-century America. A young woman (Rosalind Chao) is sold by her father and shipped to America. She lands in a small mining town in Oregon, where she’s essentially a slave. Slowly she gets on her feet and becomes her own person, thanks to her willpower and the help of a few new friends, the main one played by Chris Cooper. The low budget is easily visible, but it doesn’t really hurt the movie much. Based on a true story.

B+ The Hound of the Baskervilles, Stanford, Tuesday & Wednesday

The best Sherlock Holmes novel gets a reasonably close and very effective adaptation in the first Holmes adventure starring Basil Rathbone and Nigel Bruce. Yes, the forbidding English moors are obviously a soundstage, but they still provide the sense of dread that the story requires. Rathbone is the perfect Holmes, and this is one of his best vehicles as that character. On a double bill with Three Smart Girls Grow Up.

The most beloved western comedy of all time doesn’t do all that much for me. Sure, it has moments of great laughter as it lampoons everything from the clichés of the genre to institutional racism to the clichés of every other genre. But for every joke that hits home, two are killed by Mel Brooks’ over-the-top, beat-the-audience-over-the-head directing style.