Both Roger Ebert and David Thomson argued that the Godfather films work because we never see the inevitable innocent victims of the Corleones’ violence. The only people they kill onscreen are other criminals–usually those bent on killing them. But that argument only works if you assume that young, female sex workers don’t count as innocent victims. In The Godfather (which also made my my A+ list), a Corleone hitman machine guns down a mafia bigwig in bed, killing both the bigwig and a young woman (presumably a mistress or prostitute) in bed with him.

In The Godfather: Part II, the (thankfully) off-screen killing is far worse. Michael’s henchmen kill a bound prostitute in what appears to be a particularly gruesome murder–just to get a senator under the family’s thumb.

Writer Mario Puzo and director/co-writer Francis Ford Coppola want you to know that seven years after taking over his father’s business, Michael Corleone is thoroughly evil. He walks around like a man with a dead soul, sullen, sad, and very paranoid (with good reason). He says he loves his wife and children, but he often treats them with the cold authority he uses with everybody else. The nice young man from the beginning of The Godfather no longer exists. Michael’s tragedy is that, with all of his material success, he knows that spiritually he has failed.

I have a strange relationship with Michael Corleone. By this point in his life, he’s a cold-blooded killer who repulses me. But I remember the younger Michael and still feel some affection for him. I want him to outwit the other gangsters and the crooked politicians lined up against him. Yet the means he uses to achieve his goals (note that murdered prostitute) make my blood run cold.

The Godfather: Part II is one of those rare sequels that’s better than the original. And since The Godfather is one of the greatest films ever made, that’s quite an achievement. Only two sequels made my A+ list of films that I’ve loved for decades and still love–and this is the best of the two.

We first reacquaint ourselves with Michael at a lavish, outdoor party celebrating his son’s confirmation. But the warm, loving, old-world charm of the first film’s wedding reception is long gone. Set on the Nevada shore of Lake Tahoe in 1958, everything at this party looks garish and ugly–conspicuous consumption at its worst. 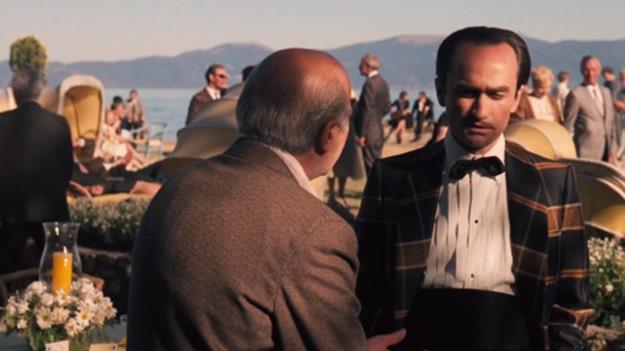 But that night, someone attempts to kill Michael. Most of the film concerns his struggle to identify and wipe out those responsible. This will put him in an uneasy collaboration with an aging Jewish gangster, clearly based on Meyer Lansky and played by the great acting teacher, Lee Strasberg. It will also take him to Cuba on the eve of the Revolution.

The Godfather: Part II contrasts Michael’s struggle to stay on top with his father’s struggle to get there. Roughly a third of the film plays as a prequel rather than a sequel, showing us the young Vito Corleone (Robert De Niro) in the 1910s and ’20s. Vito is the ultimate family man, completely invested emotionally in his wife and young children. It’s for their sake that he becomes a criminal. As he becomes rich and successful, he becomes something of a local bigshot and hero. People come to him with their problems, and he helps.

De Niro is amazing in the role (he won an Oscar for it). Physically, he’s nothing like Marlon Brando. But his voice and gestures easily allow us to imagine him as the same character, 25 years younger.

By cutting back and forth between these two stories, the film shows us the seeds in Michael’s moral downfall. Vito, with the best of intentions, turned to evil means to make his family comfortable. Decades later, and only years after the patriarch’s death, that decision destroys the family.

As The Godfather: Part II comes to a close, Michael has triumphed against all of his enemies. But he has alienated everyone close to him–or at least those still alive. There’s nothing left in him but regrets.

One thought on “A+ List: The Godfather Part II”