A- Crime drama
Written and directed by Zhangke Jia

At first you think this is going to be a gangster movie. At one point you decide it’s becoming a revenge flick. Slowly, you realize it’s something very different; something much more subtle.

For most of Ash Is Purest White‘s long runtime, there’s no conventional plotline. You have a spurned woman, moving through a changing China, hoping to find what she has lost. And that is more than enough.

In the early scenes, the film does everything possible to make you love a mob boss named Bin (Fan Liao). When two of his henchmen threaten to fight between them, Bin calms everyone down. He’s friendly, concerned, and kind. He carries a gun (a serious offense in China), but he doesn’t use it. 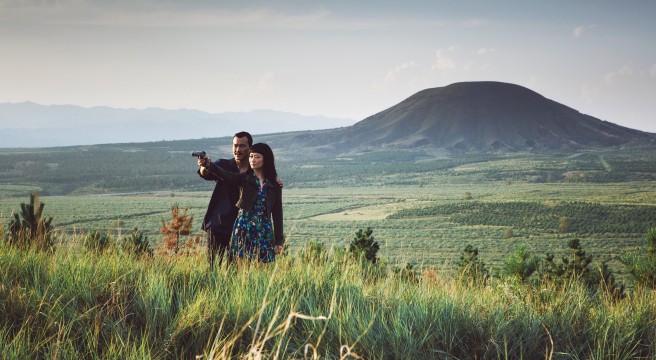 But the film isn’t about Bin. It’s about his girlfriend, Qiao (Tao Zhao). She’s even more lovable than Bin. When we first meet her, her fresh, smooth face suggests someone hiding nothing and happy about everything (that will change). Young, open, and likeable, she’s adored by everyone.

When another gang attacks her boyfriend, in what could easily become a fatal beating, she saves him by pulling out his gun and firing it into the air. (I never understood firing a warning shot upward in a crowded city. There’s a very good chance it would kill an innocent bystander. But I guess it looks good in the movies.) Inevitably, she gets arrested and convicted for carrying and using a gun. When asked where she got the gun, she again protects Bin with a story so absurd that she’s also convicted for perjury.

Five years later, an older and wiser Qiao leaves prison, hoping to resume her relationship with Bin. Highly unlikely. Bin got out years earlier and he hasn’t even visited her.

The bulk of the film follows Qiao’s after-prison journey, sometimes looking for Bin, sometimes connecting with him, and sometimes just traveling. She’s told that he has another girlfriend and doesn’t want to see her. She cons people out of their money and their belongings. She finds Bin in a condition she never expected.

Ash Is Purest White is as much about modern China as it is about one woman’s search for the lover who dropped her. There’s a sequence near the Three Gorges Dam, and another where she meets a man on a train who’s planning to create a tourist trap built around UFOs.

This film is not about crime, revenge, or any other conventional movie plot. It’s about a changing woman moving through a changing country. And it could not have worked at all without Tao Zhao’s subtle and complex performance.

Ash Is Purest White opens Friday at the Embarcadero Center and the California (Berkeley). Note:  I have altered this paragraph because of a last-minute change in the theaters.