A Who Will Write Our History, Elmwood, Vogue, opens Friday

I’ve seen a lot of films, narrative and documentary, about the Warsaw Ghetto, but I never felt the reality of life in that hellhole until I saw this one. Throughout the Ghetto period, a group of courageous Jews wrote down everything they could. If the Germans had found out what they were doing, they would have been killed and their writings destroyed. To tell this story, director Roberta Grossman broke a lot of rules – mixing narrative and documentary techniques – to create a stronger emotional punch. The effect was stunning.

A German doctor interrupts her sailing vacation to save refugees stranded on a sinking boat. But if she brings her own vessel close enough to help, they will swamp it and she’ll drown with them. And the authorities don’t seem to care about saving these particular people? Styx pulls no emotional punches. It puts you on the edge of your seat, but not in the Hitchcockian, fun way you expect from Hollywood. It makes you wonder what you would do in such a situation. Read my full review.

I remember liking this darkly comic crime film from 2007, but I don’t remember it good enough to give it a grade. Two British hit men (Brendan Gleeson and Colin Farrell) cross the channel to kill a man in Bruges. Things get, well, strange. 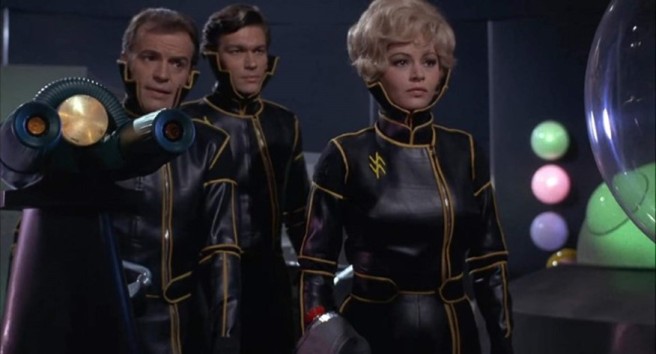 Vampires in outer space? If you like weird, campy horror from the mid-1960s, you’ll probably enjoy these. For what it’s worth, Queen of Blood stars John Saxon, Basil Rathbone, Judi Meredith and Dennis Hopper. Planet of the Vampires was directed by Mario Bava. If nothing else, the trailers are pretty funny: Queen of Blood and Planet of the Vampires. 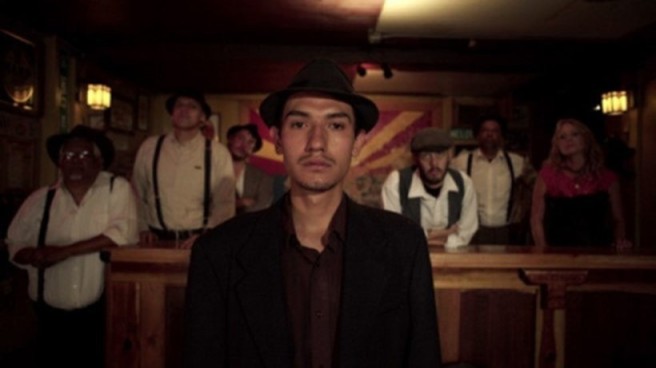 Robert Greene’s documentary initially feels distant and slow, but improves as it goes along. In 1917, Bisbee, Arizona was a prosperous mining town. But many of the miners wanted a part of that prosperity and joined the union. So the company, the sheriff, and a group of new deputies rounded them up – along with their sympathizers – herded them into cattle cars, and freighted them to the middle of the desert. To mark the event’s centennial, the townspeople reenacted this dark piece of local history for Greene’s cameras. Read my full review.

A+ North by Northwest & B- To Catch a Thief, Stanford, Friday through Sunday

The first double bill in the Stanford’s new Alfred Hitchcock series
North by Northwest: Cary Grant plays a suave and witty advertising executive chased by evil foreign spies (who think he’s a crack American agent), and the police (who think he’s a murderer). So, he must escape almost certain death again and again while spending quality time with a very glamorous Eva Marie Saint. Alfred Hitchcock’s light masterpiece. Read my A+ appreciation.
To Catch a Thief: This one feels more like a vacation on the Riviera than a tight and scary thriller. But it nevertheless provides a few good scenes and sufficient fun.

A Spider-Man: Into the Spider-Verse & A Black Panther, Castro, Monday, 6:30 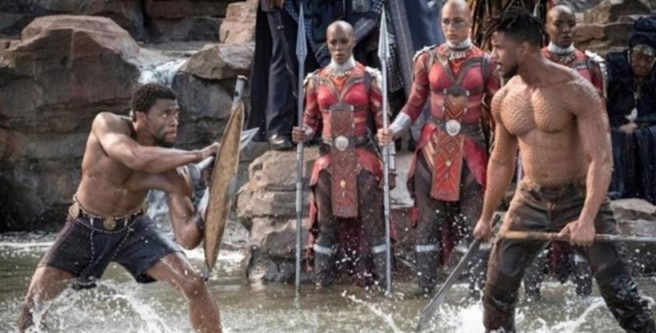 Spider-Man: Into the Spider-Verse: This enjoyable and entertaining animated superhero movie has multiple Spider people from different dimensions popping up, including an aging Peter Parker with a pot belly. But the main Spider-Man here is a black kid from Brooklyn who must learn how to use his accidentally-given powers. Read my full report.
Black Panther: Yes, it was revolutionary to make a huge-budget superhero movie with an almost entirely black cast. But there’s more. The main villain has a serious point, and the hero must face some ambiguously moral choices. It’s also a lot of fun.

A- If Beale Street Could Talk & B The Favourite, Castro, Tuesday, 6:30

If Beale Street Could Talk: Barry Jenkins’ latest tells a strong and moving story, looking closely at the African-American experience. Adapted from James Baldwin’s 1974 novel, it tells its story through Tish (KiKi Layne), a black pregnant 19-year-old with an upstanding and loving boyfriend (Stephan James) in prison for a rape he could not possibly have committed. Read my full review.
The Favourite: There’s a lot to like in this weird, tongue-in-cheek movie about England’s 18th-century Queen Anne (Olivia Colman). Rachel Weisz and Emma Stone spar to be the sick and crazy Queen’s best friend and lover – with all the power that entails.

Think American Graffiti set in the stoned ’70s. As the school year ends in a small Texas town, students and recent alumni head out looking for pot, parties, and sex. Some of them find it. But Richard Linklater isn’t George Lucas (thank God), so Dazed and Confused finds greater depths in the many characters. The young, largely-unknown cast includes such future stars as Milla Jovovich, Ben Affleck, Parker Posey, and Matthew McConaughey.

B+ The Umbrellas of Cherbourg, Castro, Wednesday, 7:00

When we think French New Wave, we imagine grainy, black-and-white stories filled with angst and alienation. Yet Jacques Demy, shooting a believable story in real locations, created a lush, colorful and sublimely romantic musical. A movie like few others, with an astonishingly young and beautiful Catherine Deneuve (as opposed to the astonishingly well-aged and beautiful Catherine Deneuve of today). Read my Blu-ray review. On a double bill with the original Thomas Crown Affair, which made almost no impression on me when I saw it.

I’m listing this as a Recommended Revival because many consider it a masterpiece; even if I don’t. Slow and pretentious, Alain Resnais’ Very Important European Art Film gives you almost no information about the people onscreen (I hesitate to call them characters) and no reason whatsoever to care if they live or die. But the film is visually striking and technically dazzling, and if you’re willing to meet it halfway, it has a certain hypnotic charm. Too bad it refuses to meet you halfway. See my essay.