I’m writing this very long newsletter on June 11, just before taking a few weeks off Bayflicks. I thought I’d let you know about at least some of what’s coming up while I’m off.

And because I wrote this early, I’m missing a lot of things. For instance, I know nothing about what will screen at the Stanford in July.

A Be Natural: The Untold Story Of Alice Guy-Blaché, Elmwood, opens Friday; additional, special screenings at the Roxie and Rafael

Q&A with Filmmaker Pamela B. Green!
If you’ve never heard of the Alice Guy, the first woman film director (and arguably the first director of any gender), you’re in good company. Early on in Pamela Green’s documentary, a montage of major filmmakers admit that they never heard of her either. Guy had a remarkable life until sexism ruined her career; a tale very much worth telling. Green shows us the detective work involved with making a historical documentary. Read my full review.

From here on in, this newsletter is organized by date.

A cop commits suicide, and the first person the new widow calls is a mob boss. The mob runs the unnamed city and the police do what they’re told in this Fritz Lang noir – except for one honest detective assigned to the case (Glenn Ford in a strong performance). Soon he’s sticking his nose where it doesn’t belong. He’s fired, of course, but that doesn’t stop him. And getting fired isn’t the worst that will happen to him and other good people in this tale of thorough corruption. Gloria Grahame gives a great performance as the rebellious girlfriend of a violent thug (Lee Marvin). The opening screening of the series Fritz Lang’s America.

This one should have been a winner. It’s a noir directed by Fritz Lang, starring Glenn Ford and Gloria Grahame – the team that brought us The Big Heat! What’s more, it deals with the very real issue of spouse abuse. And to top it off, all the main male characters work for the railroad, and the movie appears to have a love affair with trains. And yet, with all those good points in its favor, it’s nowhere near as powerful as it should have been.

Charlie Chaplin expert Dan Kamin will demonstrate and discuss Chaplin’s technique. The evening will include a screening of Chaplin’s longish short, Shoulder Arms, a very funny war comedy, parodying every aspect of World War I. Chaplin made the movie while real soldiers were dying in the trenches, and yet the survivals laughed hard at the movie. Why not? It’s extremely funny, often in very silly ways, but without any real message about the horror of war.

A+ The Man Who Shot Liberty Valance, Stanford

As much as any other artist, John Ford defined and deepened the myth of the American West. But in his last masterpiece, The Man Who Shot Liberty Valance, Ford tears that myth down, reminding us that a myth, when you come right down to it, is a lie. Avoiding beautiful scenery and even color (a black and white western was a risky investment in 1962), Ford strips this story down to the essentials, and splits the classic Western hero into two: the man of principle (Stewart) and the man of action (John Wayne). Read my A+ report. It’s double-billed with The Far Country, which I don’t believe I’ve ever seen. This double bill will also play Saturday and Sunday. 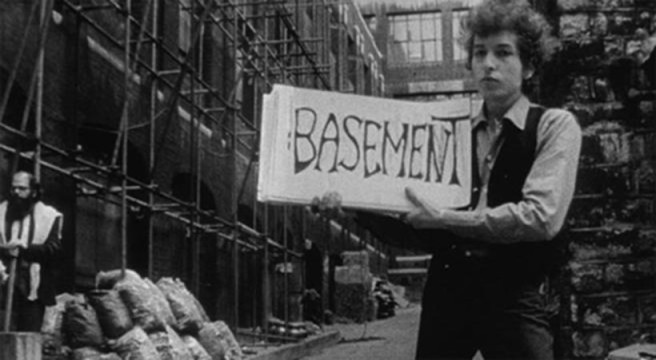 You have to be a very hardcore Bob Dylan fan to really enjoy D.A. Pennebaker’s groundbreaking documentary, Dont Look Back (yes, that’s the correct spelling). Not only would you have to know and love his songs, but you’d need to know something about Dylan as a person and a phenomenon, and about what was going on around him and within him as he toured England in the spring of 1965. In its fly-on-the-wall directness, Pennebaker’s film captures the insular world Dylan built for himself, and gives you a glimpse of the extremely conflicted and complex genius he was like just before turning 24. Read my Blu-ray review. Part of the series It’s Only Rock ‘n’ Roll.

Quentin Tarantino’s roadshow western is surprisingly small and intimate, while reveling in the majesty of a long-unused large-film format. Two bounty hunters (Samuel L. Jackson and Kurt Russell), along with an arrested killer (Jennifer Jason Leigh) find themselves stuck in a store in the middle of nowhere, waiting out a blizzard, along with five other disreputable people. The film occasionally reminded me of Stagecoach, but this is Tarantino, not Ford, so you can expect a lot of talking and horrendous violence. I’ve written more on this one. The New Mission will screen the film in 35mm, which is something of a letdown. I’d give it an A if was in 70mm.

The first important science fiction feature film still strikes a considerable visual punch. The images – workers in a hellish underground factory, the wealthy at play, a robot in the form of a beautiful woman – are a permanent part of our collective memory. The simplistic politics at times feel like trite melodrama, but it soon turns into something like grand opera. Read my longer report and my Blu-ray review. Unfortunately, this is an 84-minute version; the near-complete version (to which I give an A) runs 149. With live musical accompaniment by Sleepbomb.

This narrative feature, that feels very much like a documentary, takes you to one of the most remote places human beings call home–Nepal’s harsh, high-altitude Dolpo region. Members of a small tribe must move over treacherous mountains to sell the salt they have gathered–a trip that would be dangerous enough without internal strife. But the chief’s son and heir apparent has just died, and the aging leader won’t give his blessing to the man most competent to lead the journey. Set against breathtaking scenery, Himalaya brings us into a culture most of us will never experience first-hand. Co-Presented with the Buddhist Film Foundation

For a 30-year-old film, Do the Right Thing feels very much like the here and now. By focusing on a few blocks of Brooklyn over the course of one very hot day, Lee dramatizes and analyzes everything wrong (and a few things right) about race relationships in America. And yet this beautifully made film is touching, funny, warm-hearted, and humane. Read my A+ appreciation. 30th Anniversary screening.

People associate Jaws with three men in a boat, but the picture is more than half over before the shark chase really begins. For that first half, Jaws is a suspenseful, witty variation of Henrik Ibsen’s classic play, An Enemy of the People, but with a central character more conflicted and less noble (Roy Scheider). Then the three men get on the boat and the picture turns into a hair-raising variation on Moby Dick. Jaws’ phenomenal success helped create the summer blockbuster, yet by today’s standards, it’s practically an art film–albeit one that could scare the living eyeballs out of you. See my Blu-ray review and Book vs. Movie article. On a double bill with something called Rollercoaster.

François Truffaut helped launch the French New Wave and modern cinema with this tale of a rebellious boy on the cusp to adolescence. Shot on a very low budget, it follows young Antoine (Jean-Pierre Léaud in the first of six films playing this role) as he cuts school, gets in trouble, discovers his parents’ marital problems, and refuses to fit in. Set to a brilliant jazz score, The 400 Blows captures the exhilaration and the horror (mostly the horror) of being 13. A very appropriate choice to open the series Jean-Pierre Léaud at 75.

Duty to country conflicts with loyalty to friends in one of the best and most unusual Shakespeare adaptations in the cinema. As adapter and director, Orson Welles combined the best parts of Henry IV Part I (my favorite Shakespeare play), Henry IV Part II (a weak sequel with a great final act), and Merry Wives of Windsor (a reasonably funny comedy) to create a whole greater than its parts–funny, rousing, and ultimately tragic. And if anyone was ever born to play Falstaff, it was Orson Welles. 4K restoration. Part
of the series Looking Again at Orson Welles.

This seven-hour epic isn’t just long; it’s huge, and really requires a large screen. It’s easily the most spectacular epic I’ve ever seen, filled with huge crowds, spectacular costumes, and massive sets. But director Sergey Bondarchuk does more than amaze you with visuals. He finds new ways to show us both the frightful horrors of war and the heartbreak of a young woman desperately in love. The film is broken up into four parts, each of which is a full-length film. Read my full report. The Castro will screen Parts 1 and 2 on Saturday, and 3 and 4 on Sunday.