B+ Mystery
Written by András Szekér, from the novel by Vilmos Kondor
Directed by Éva Gárdos

Note: I wrote this review last summer, after seeing the movie at the San Francisco Jewish Film Festival. My intention was to post the review shortly before the film’s Bay Area theatrical run. Last night I discovered that it’s available for streaming from Kanopy, so I felt it was okay to post the review – even though the distributor lists it as “Coming Soon!”

Within seconds after the title fades from the screen, the deep shadows, fedora hats, and first-person narration tell you that you’re in an homage to ’40s-style detective movies. Only the widescreen and color remind you that this is a new film. At its worst moments (which aren’t many), Budapest Noir borders on parody. But more often, it’s an engaging story about the rise of fascism.

In 1936 Hungary, something very scary, and very real, was going on. And the film shows that something from the ground level. It’s a serious movie, but a fun one, too.

We see that coming evil through the eyes of Zsigmond (Krisztián Kolovratnik), a crime reporter with all the cynicism, street smarts, and basic decency of Philip Marlowe. He even smokes and wears the obligatory fedora. And what he sees is his own country dropping precariously into fascism. This is a Hungary where one subway stop has been renamed Adolph Hitler Square. (That’s playing with history a bit. The square didn’t get renamed until 1938.)

In the new Hungary, anti-Semitism comes up in occasional but frightening ways. In a café, young men react with their fists to a “Jewish song.” Violence is right around the corner.

A beautiful young woman is found dead. Murdered. There’s no identification, but to those in power, she’s just another dead whore. There are also reasons to believe she was Jewish.

If you understand anything about noir, you know what’s going to happen. Zsigmond’s editor insists that this murder requires nothing but a couple of paragraphs. The police don’t want this investigating reporter sticking his nose in their affairs. The whorehouse madame feels the same way. But a rare sense of decency keeps him going, no matter how many times he gets threatened and beaten up.

Zsigmond has a girlfriend, Eckhardt (Réka Tenki), a news photographer of exceptional courage. When we first meet her, she’s come home from Germany, where she photographed things she wasn’t supposed to see. But she also has a way of disappearing for long periods of time with little or no warning. When she turns up at the front door, his one-night stand is just leaving. 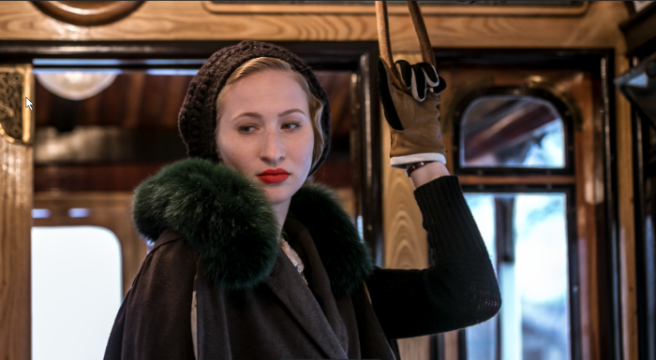 This is a beautiful film to look at. Cinematographer Elemér Ragályi (1945) makes the shadows and fog menacing, but also brassy and exciting. The beautiful art direction and old-time costumes give the film considerable eye candy, as does the casting of Kolovratnik, Tenki, and Franciska Törőcsik in the small but important role of the victim.

On one level, Budapest Noir is a well-done, conventional, entertaining revisit to a beloved, old style. And yes, it has a big, noir-like surprise at the end. The complete immersion into genre sometimes cheapens the serious message. But more often, the style and the message work well together.