I didn’t see a single narrative film Sunday at the SFFilm Festival Sunday, and only one conventional documentary. The other two features could be described as docs, but they’re more about the visuals than the contents.

This 63-minute visual poem can enthrall you, amaze you, or maybe put you to sleep. In the 1920s and ’30s, F. Percy Smith made educational films, shooting extreme close-ups of life in action – seeds sprouting, insects eating, single-cell organisms, and so on. Much more recently, Stuart A. Staples of the band Tindersticks re-edited Smith’s work and added new music. Staples’ version has an hypnotic feel, but in the end it left me wanting to see Smith’s original versions. It was preceded by the short Passerine in Time.

I give Minute Bodies a B-.

I saw the last SFFilm screening of Minute Bodies.

One of the most technically accomplished, emotionally effective documentaries I’ve seen in a while. Fuyao, a car glass manufacturer from China, takes over a closed factory in Detroit, producing jobs and cultural conflicts. The Chinese bosses, and the lower-level Chinese employees brought over, have been raised to think only of the company. The Americans, on the other hand, complain about overwork and unsafe conditions. Soon the American workers are pushing for a union. The ending is not a happy one. 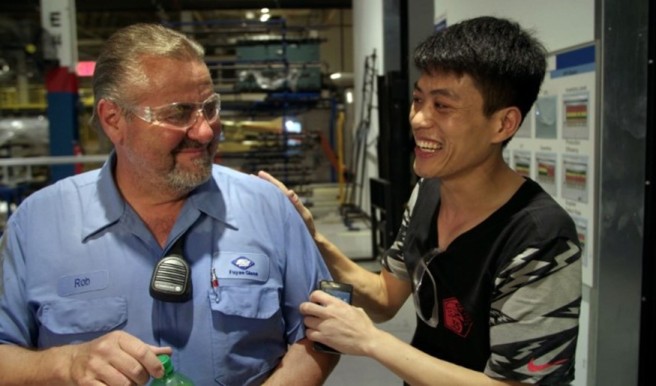 I give American Factory an A.

Unfortunately, my schedule forced me to skip the Q&A with directors Steven Bognar and Julia Reichert. But you can probably catch them at the Festival’s second American Factory screening, Tuesday, April 16, 8:30, at SFMOMA. It will probably be available on Netflix in the near future, and just might get a modest theatrical release, as well.

Aquarela is about water in its more extreme conditions. We see dangerously thin ice, glaciers calving, and the strikingly beautiful underside of an iceberg. In warmer climates, we see flooding in rural and urban settings. The film may also be about climate change. But as much as anything else, Aquarela is a celebration of modern cinema technology, from the incredible camerawork that would have once been impossible to the all-embracing Dolby Atmos sound mix.

I give Aquarela an A, at least if you see it on a really big screen with great audio. Otherwise, an A-.

There was no Q&A after the screening.

I saw Aquarela at the Dolby Cinema, which was absolutely the right theater. It was the only Festival screening of this film. The documentary will open in New York and LA in August; I don’t know when it will open in the Bay Area.