Garfield the cat may hate Mondays, but I had a pretty good one at the SFFilm Festival…despite the light rain. I saw yet another amazing documentary, followed by a very strange narrative film.

The Ochoa family of Mexico City have a difficult, unusual, and occasionally profitable business. They run a freelance ambulance, spending their nights providing paramedic work and bringing patients to hospitals. Occasionally they get paid. Luke Lorentzen’s remarkable documentary follows them on their harrowing routes trying to save lives and earn a few pesos within a poor and extremely corrupt system.

I give Midnight Family an A.

Oddly, two of the best documentaries I’ve seen in this year’s SFFilm Fest saw this year, Midnight Family and Midnight Traveler have very similar titles. What’s more, each title could work for either film.

After the screening, Lorentzen came on stage for a Q&A. Some highlights, edited for brevity and clarity:

You have one more chance to see Midnight Family at SFFilm: Thursday, April 18, 6:00, at the Creativity Theater. The film may get a limited theatrical release, and more likely will stream somewhere.

This German-language Swiss drama starts with a bang – a woman goes berserk in church – but the film fizzles as it comes to its disappointing end. Is the woman (Judith Hofmann in a fine performance) controlled by the Devil? Does she have serious mental problems? I don’t think writer/director Simon Jaquemet knows. Her family is extremely religious, which doesn’t help. She’s also working with test animals, specifically a monkey, so she has another moral issue. And a former lover, a criminal, re-appears in her life, which is a real big problem because he’s dead. 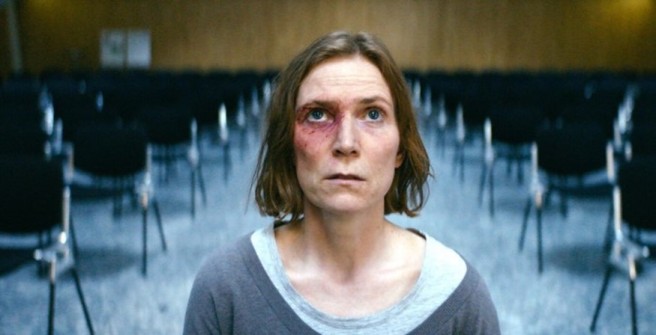 I give this film a B.

Jaquemet, struggling a bit with his English, answered questions after the film. Some highlights, edited for brevity and clarity:

I saw the last SFFilm screening of The Innocent. I don’t know if you’ll ever have another chance.

I’m taking today (Tuesday), so I won’t be posting a report tomorrow morning.