Another five movies I’ve seen since my last list, in order of quality:

This excellent drama about drug addiction turns into a crime thriller, and amazingly, despite the change in tone, it works. A nice, small-town family has its Christmas plans blown when the recovering-addict oldest son (Lucas Hedges) unexpectedly comes home for the holiday. His younger sister and stepfather don’t trust him. Neither does Mom (Julia Roberts in a powerful role), but she so much wants him to be reformed that she goes along with it – even while she hides the pills and jewelry. Eventually, the wayward son will bring Mom on a journey into the nice town’s criminal underbelly. 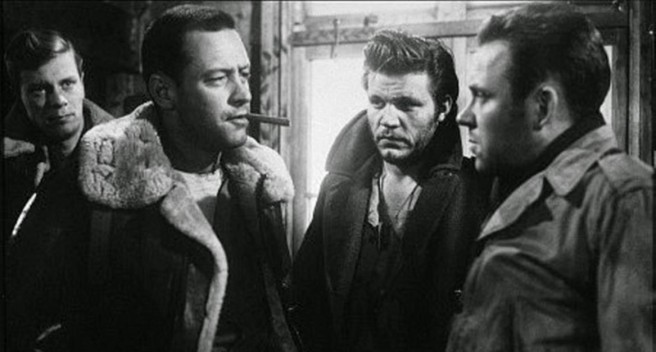 Billy Wilder’s POW movie is no Grand Illusion, but it’s an enjoyable comic mystery adventure. There’s a stool pigeon in the barrack, and information is getting to the Germans. Everyone suspects its Sargent Sefton, because he’s an amoral outcast and a wheeler dealer who trades with the guards. We know he’s not the informer because he narrates the picture and he’s played by the film’s star, William Holder. Robert Strauss and Harvey Lembeck provide most of the comedy as a sex-obsessed prisoner and his much smarter pal.

Amongst movies about rock stars caught in their own world of drugs, sex, and celebrity, Vox Lux has two things going for it. First, there’s a curiously interesting theme of mass murder running throughout the picture. What’s the connection between pop music and mass murder? My guess: fame. Second, Natalie Portman gives a stellar performance in the second half as Celeste, a pop star who’s clearly falling apart. Raffey Cassidy plays the teenage Celeste in the first half of the film; in the second half, she plays Celeste’s daughter. She’s also very good, but she can’t compare to Portman’s star wattage.

Pierce Brosnan may not be Sean Connery or Daniel Craig, but he still makes a very good James Bond (much better than Roger Moore). And in his best Bond movie, he plays a surprisingly vulnerable 007. The plot is absurd and ridiculous, but fun, with a very long pre-credits sequence and many surprising twists. It also gives Judi Dench much more to do in her third performance as M. Speaking of characters with one-letter names, this was Desmond Llewelyn’s last performance as Q; I believe he was in more Bond movies than any other actor.

It’s been a long time since I’ve been this disappointed by a Spielberg movie. Life is so unbearable in 2045 that almost everyone spends their time in a massive virtual reality game, where their best friend is probably someone they’ve never physically met. Most of the movie is set in that virtual world, which is unfortunate because the dystopian “real” world – even if badly thought out – is more interesting than the game. The CGI action scenes succeed in being big and loud, but not exciting nor suspenseful. I’m not sure if youth of the 2040s would know and care so much about 1980s popular culture.