When I saw the Coen Brothers’ Big Lebowski at the BAMPFA in 2014, I loved the movie but hated the horrible DCP. This exceptional comedy clearly needed a better digital transfer.

I’m glad to say it now has one. More on that below.

The Big Lebowski is a Raymond Chandler-type film noir story, except that the protagonist isn’t a tough, street-smart private detective. He’s a drunken pothead slacker who cares only about bowling and calls himself The Dude (Jeff Bridges). The concept, on its own, is hilarious. The execution is damn near perfect.

But it’s more than just a comic riff on a popular genre. There’s a thin, barely grasped sense of Zen to the movie – as if you could throw yourself out into the universe and everything will come out okay…unless it doesn’t.

Consider Sam Elliott’s prairie philosopher narration, which sort of sets the scene but is stylistically at odds with everything else in the picture. Or John Turturro’s utterly bizarre turn as a bejeweled bowler named Jesus. Or the dancing dream sequence that mixes Saddam Houssine with Busby Berkeley.

The great supporting cast includes Julianne Moore at her most aristocratic and Philip Seymour Hoffman at his most obsequious. John Goodman stands out as the Dude’s friend Walter–a Vietnam vet with a very bad case of PTSD. This is a guy who pulls a gun to settle an argument over bowling scores. On one level, Walter is the sort of dependable friend who will always have your back. On the other, he’s crazy, dangerous, and doesn’t think things through. The Dude gets into a lot of trouble because of Walter’s shenanigans. 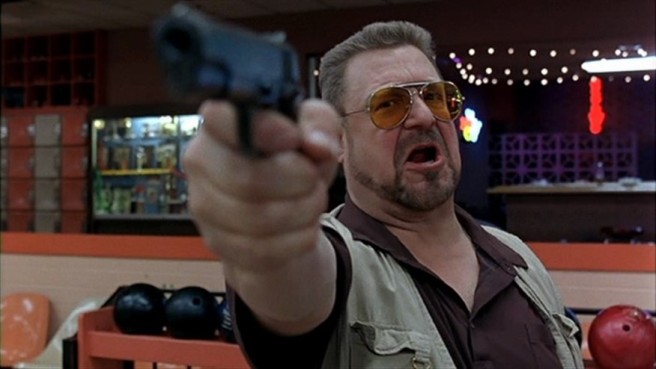 The Big Lebowski is a blissfully vulgar movie. It might not have as many f-bombs as Goodfellas, but Lebowski‘s  f-bombs are funnier.

Three formats in one package

The new 20th-Century Anniversary Edition of The Big Lebowski offers three ways to watch the movie.

Outside of a 35mm print, this is the best I’ve ever seen The Big Lebowski. The new 4K restoration, reduced to 1080p for the Blu-ray, looks fine. It was obviously mastered by someone who knew what they were doing (something I couldn’t say for the previous digital master).

[Update: I have since discovered that the Blu-ray was from an older 2K scan and master.]

Which isn’t to say that this is a showcase Blu-ray. It’s not that sort of movie.

I have no complaints with the 5.1 DTS-HD Master Audio sound mix.

As near as I can tell, most of these are from the ten-year anniversary Blu-ray edition.

One thought on “The Big Lebowski on Blu-ray…and 4K”