And with Goodfellas, we really get down to the nitty gritty. And believe me, it’s gritty. 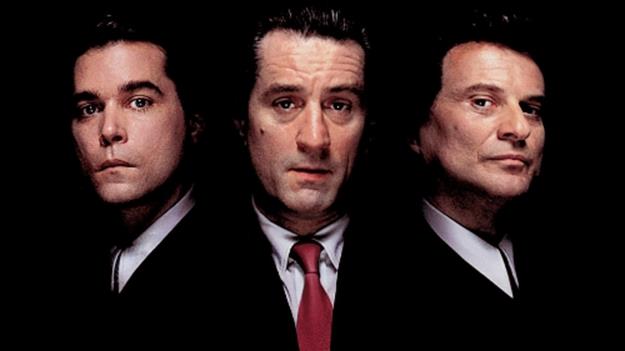 The Godfather was based on a novel; Goodfellas on a true story–and that makes a world of difference. This isn’t an operatic tragedy of a great man’s fate. Instead, it’s an examination of the workaday life of a run-of-the-mill gangster. It follows the career of Henry Hill (Ray Liotta) from his enthusiastic, adolescent leap into crime until–25 years later–he rats on long-time friends in order to save his own neck. (Was that a spoiler? I don’t think so. It’s not that kind of movie.)

Liotta narrates most of the film as Hill, who clearly loved his life as a “wise guy.” He had money, the mob was a second family for him, and everyone treated him with respect. Sometimes he had to beat someone up a bit, or help a friend dispose of a dead body, but that was just part of life.. 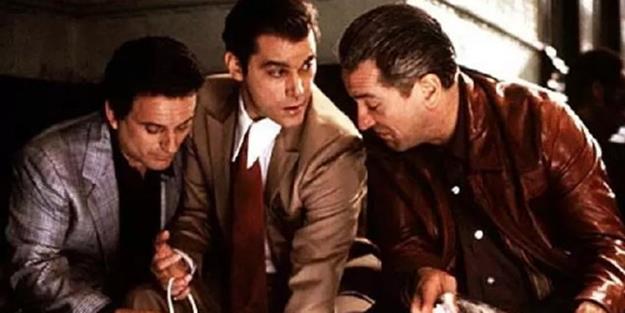 While the narration romanticizes Henry’s life, Scorsese and his collaborators show us the reality. We’re watching Henry and his friends terrorize small businessmen, corrupt the police and other institutions, and wallow in expensive but tasteless consumerism. They’re vicious, cruel, and live a life devoid of grace, love, and any real security.

The main friends are Jim (Robert De Niro) and Tommy (Joe Pesci). Jim comes off as friendly and generous. He loves to give away cash, popping $20 or $100 bills in people’s pockets. When he highjacks a truck and takes its contents, he gives the driver a very generous tip. But he also examines the driver’s license, and warns him of the consequences of talking. Deep down, he’s a cold-blooded killer.

Tommy, on the other hand, is dangerously off his rocker. Sitting around a table with other wise guys, he tells stories that has them all laughing (although I didn’t find many of them very funny). But he can turn on a dime and murder someone for the slightest insult. Every actor’s performance in this film hits its mark, but Pesci’s is the one you remember.

The film takes a surprisingly glamorous turn when Henry courts his future wife, Karen (Lorraine Bracco). When the romance begins, the film’s viewpoint switches from Henry to Karen; Bracco even takes over the narration. That section includes the film’s most celebrated sequence–a long Steadicam shot the follows Henry and Karen as they enter the Copacabana through a backdoor, and are greeted like royalty as they walk through the kitchens and back rooms before getting a ringside table.

With his suave manner and huge wad of bills, Henry seems irresistible to a middle-class, sheltered Jewish girl looking for excitement. The glamour, of course, doesn’t last. Henry proves to be a horrible husband and father in just about every way possible.

The film brilliantly uses popular music . Eric Clapton’s famous Layla instrumental–originally written as the wail of frustrated lover–works on a very different level here, as one dead body after another turns up while Jim is covering his tracks.

Eventually Henry gets involved with the drug trade, and becomes a coke addict himself. That doesn’t help his paranoia; and he has very real reasons to be paranoid. The cops are after him, and his old friends (the ones left alive) want him dead.

In the end, he has two choices. He can start a 30-year prison stretch that would almost certainly end with his murder. Or he could enter the witness protection program. The choice is obvious.

Goodfellas is dazzling filmmaking and incredible story-telling. And the story it tells shows a seductive but inevitably horrible way to live.