B+ Family drama
Written by Daniel Pearle; based on his stage play
Directed by Silas Howard

Early on, I found myself wondering if we really need this story? Do I care if this white, comfortable, Brooklyn couple get their four-year-old son (the Jake of the title) into the right private school?

But as the story unwinds, it becomes about something much more interesting. Jake is a little boy who leans heavily towards wanting to be a little girl. He likes dresses. He plays with dolls. He loves the Disney princess movies. His differences guarantee he’ll be bullied in any school. But in a public school with a low teach-to-student ratio, it could be far worse.

Jake’s story is worth watching, but writer Daniel Pearl and director Silas Howard apparently didn’t think so. We see Jake rarely, and only in glances. The film is really about his parents. I assume this decision is at least partly due to Pearle’s original stage play, where Jake is never onstage. Children, like animals, are much easier to control on a film set than live on stage.

So, if we’re going to be watching a movie about the parents of an unusual child instead of the child himself, those parents need to have some interesting responses to the situation. Luckily, they do.

One of those responses is to use Jake’s special issues to their advantage. The parents can’t really afford their preferred private school, but with a child showing Jake’s type of behavior, they might get him in through a diversity scholarship.

Fittingly, the father is a psychiatrist (Jim Parsons). His training gives him a detached view of his son’s situation – which isn’t necessarily a bad thing. One of his patients describes him as “Switzerland” – always neutral.

By the way, the movie’s primary comedy relief comes in the few scenes in his office. A patient going through divorce is tied up in very funny emotional knots. On top of that, the doctor in the office next door uses primal scream therapy, and the walls are very thin.

The mother is a former lawyer who gave up her career to be a stay-at-home mom (Claire Danes) – a decision for which even her own mother disapproves. She has considerably more trouble accepting her son’s choices; she even begins to look for “what we did wrong.” She blames Jake’s father because he never played ball with Jake. She even suggests that the “problem” is caused by a lesbian friend. This is an openminded, 21st-century, liberal Brooklynite, yet she has trouble accepting her son’s identity.

Octavia Spencer plays that lesbian friend, who works at Jake’s preschool. She goes out of her way to help her friends get their kid into their school of choice. Both their personal and professional relationships get tested here. 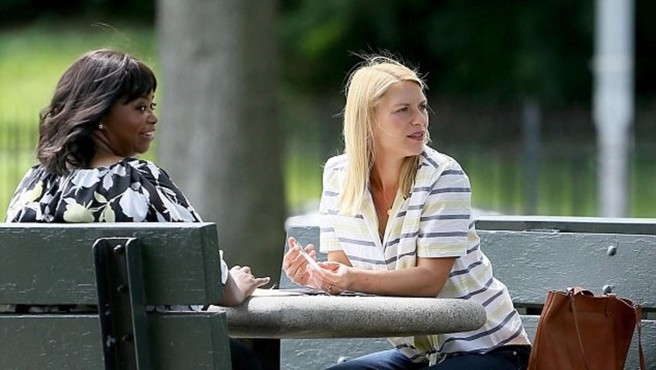 Nothing big and horrible happens in A Kid Like Jake, but a lot of little, horrible things are said. The story is true to life and the performances are all spot on. I just wished it had more of the kid (who, by the way, is played by Leo James Davis).