B+ Documentary
Directed by Morgan Neville

I’m not a Christian, but it strikes me that Fred Rogers – the ordained minister who created a long-running, completely secular children’s television program – is an excellent example of what a Christian is supposed to be. He was kind and self-effacing. He taught pre-school children how to handle their emotions and play well with others, while assuring them that each one was “special.” He was easily one of the most moral people working in television.

In the documentary Won’t You Be My Neighbor, filmmaker Morgan Neville uses clips from the show, old interviews of Rogers, who died in 2003, and new interviews with friends, co-workers, and family. The filmmaking is conventional, but the subject is not.

I’m too old to have experienced the show Mister Rogers’ Neighborhood as a child, but I did experience it as a parent. But while watching this movie, I was surprised to discover how topical the show could be. He discussed war and assassination. When bigots were barring African Americans from public swimming pools, Mister Rogers cooled his feet in a small pool, and invited a black friend to join him.

The actor who played that friend, Francois Clemmons, was not only black but gay. When Clemmons’ lifestyle threatened to become public, Rogers insisted he go back into the closet. He wasn’t personably homophobic, but he feared that the scandal would ruin the show. Years later, he apologized to Clemmons for what he had done.

Another big surprise: Rogers was a life-long Republican, although I suspect that in the last years of his life, he was called a RINO. Like so many other good people in our country, he became a target of Fox News. His crime: Telling children that they’re special. Apparently, even a three-year-old isn’t worth anything until they are economically successful. 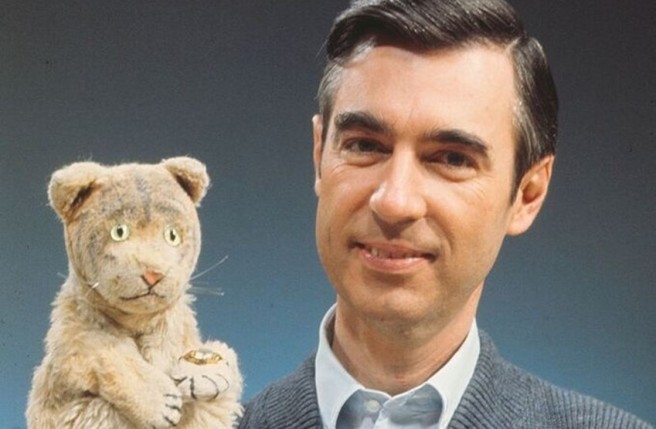 He disapproved of a great many things, including just about every other children’s show on television. Those programs didn’t care about raising good children – according to Rogers – just good consumers. The documentary shows us a very strange old toy rifle commercial, aimed at young boys.

According to this documentary, Mister Rogers’ Neighborhood was a fun set to work on, and backstage antics were common. One crewmember recalls photographing himself flashing his butt, and placing the photo where Rogers would see it. Come the following Christmas, Rogers gave the crewmember a poster of the photo.

Believe it or not, Rogers’ childhood nickname was Fat Freddy, and photos show why. He lost that weight, and as an adult he was always a svelte 143lbs; he loved the number 143 because it stood for I love you. Filmmaker Neville doesn’t mention that Rogers turned vegetarian in his 40s and remained that way.