Celebrate the Communist revolution. Ogle (or laugh at) sex kitten Jane Fonda. Play chess with Death as your guitar gently weeps. All these experiences and more can be found this week in Bay Area movie theaters.

Imagine Pulp Fiction, done in limited animation, but without the clever dialog, the wit, or the sense of redemption. That’s pretty much what you get with Jian Liu’s cartoon noir, Have a Nice Day. There’s little character development or rooting interest – and the cheap, extremely limited animation makes the characters even less interesting than what the script provides. The story is confusing, brutal, and pointless. On the plus side, Liu can occasionally amaze you through his nearly motionless drawings. Read my full review.

It’s been ages since I’ve seen Roger Vadim’s 1968 sci-fi sex camp comedy, arguably an exploitation of his then-wife, Jane Fonda. I remember enjoying it. If nothing else, Barbarella shows just how far a movie could go in the last months of the Production Code. But this isn’t just another screening of the movie. Stand-up comedians Natasha Muse and Chad Opitz will provide MST3K-type commentary. 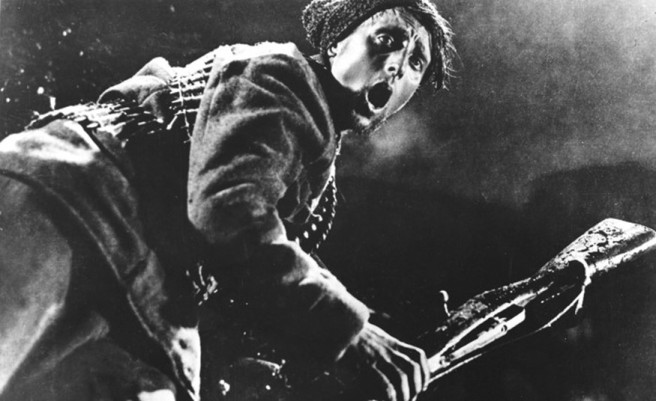 Eisenstein’s follow-up to Potemkin celebrates Russia’s Communist revolution – which, from our historical perspective, isn’t worth celebrating. But it still seemed wonderful to many people in 1928. I saw October many years ago and liked it more in parts than as a whole. Professor Anne Nesbet will lecture on the film, and pianist Judith Rosenberg will provide this silent film’s musical accompaniment. Part of the series In Focus: Eisenstein and His Contemporaries.

A knight returning from the Crusades (Max von Sydow) plays chess with Death while the plague ravages the land in Ingmar Bergman’s great medieval tale. But while the knight ponders God’s silence, his life-embracing squire (Gunnar Björnstrand) reminds us what it really means to be fully alive. Filled with wonderful characters, religious allegory, and sly humor, the film bursts with a love of humanity and a fear for our place in the universe. The opening film in the series Bergman 100: The Silence of God.

A year after George Harrison’s death, musicians and comedians (and even Tom Hanks) gathered at Royal Albert Hall to celebrate the “spiritual” Beatle and movie producer. Great moments include the two surviving Beatles playing together, a great chorus of “I’m a Lumberjack” (Harrison had a business relationship with Monty Python), and the best ever rendition of “While My Guitar Gentry Weeps,” sung by Paul McCartney and Eric Clapton. I’ve only seen this on TV, and I’m looking forward to seeing it with an audience.

FREE! At 92, Sonia Warshawski is a remarkable woman. She has been running a tailor shop for decades. She’s warm and friendly to everyone. She wears loud clothing. And she has plenty to talk about. As a holocaust survivor, she watched her mother forcibly marched into the gas chamber. But she survived, made her way to Kansas, and married another survivor (one who could laugh about the experience). Read my Jewish Film Festival report.