A The Student, 4-star, opens Friday 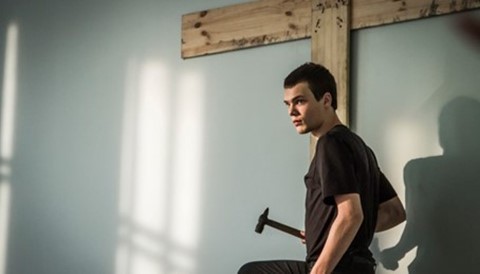 Teenaged Venya (Pyotr Skvortsov) becomes a deeply religious Christian almost overnight, quoting the Bible (always the cruelest parts), and objecting to school curriculum and procedures. He insists that girls not wear bikinis in swim class, then moves on to destroying sex education. Eventually he’s contemplating murder. Only one teacher has the smarts and courage to go against him. All this happens in a high school with Putin’s portrait on the wall. Kirill Serebrennikov’s strong, suspenseful, and disturbing drama shows, on a small scale, how religious fascism can take over a community. Read my full review.

Film curator and author Alexander Horwath, recently of the Austrian Film Museum, promises to provide “a somewhat surrealist-populist attempt at telling a story of the twentieth century.” It will look at the relationship between cinema and time.

This long show starts with a Defenders episode called The Benefactor; it deals with abortion – an extremely taboo topic in 1962. Next comes Open Secret, a 1948 B picture about ethic prejudice. The night ends with Crossfire, a low-budget film noir, and the only title in the program I’ve seen. One of a very few Hollywood films to address American anti-Semitism, Crossfire is no masterpiece, but is of considerable historical interest considering the role it played in the Hollywood Ten hearings.

I’ve never seen John Cassavetes’ first film. I fact, I must admit, I’ve seen very little of this work. One of these days I’ll fix that.

A Before the Devil Knows You’re Dead, Balboa, Thursday, 7:30

When two brothers (Philip Seymour Hoffman and Ethan Hawke) set out to rob their parents’ jewelry store in what they tell themselves will be a victimless crime, the best-laid plans of amateur crooks go lethally wrong. Writer Kelly Masterson and director Sidney Lumet (his last film) make you experience what it’s like to have your entire world fall apart bit by bit, while fully knowing that it’s entirely your fault. Read my full review.

Made in between Chaplin’s two feature masterpieces (The Gold Rush and City Lights), this reasonably fun comedy can’t help but suffer by comparison. The Tramp finds himself working in a small circus, where he accidentally becomes a comic star without knowing it. He also falls in love with a beautiful girl who sees him only as a friend. The film will screen with Chaplin’s recorded music track, made decades after he originally released the silent movie; I’m assuming Chaplin’s estate insisted on that.