A Drama
Written and directed by Kirill Serebrennikov

One determined student can manipulate his schoolmates, teachers, and the administration, disrupting an entire high school. All he needs is a fanatical belief and the will to do anything to achieve his goals.

Kirill Serebrennikov’s powerful drama, The Student, shows exactly how it can be done. It’s strong, suspenseful, and disturbing. 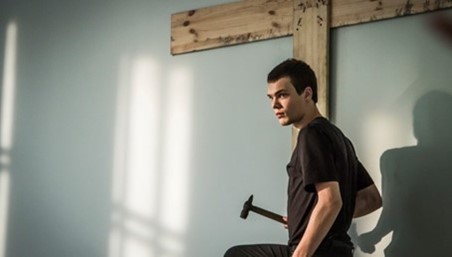 Almost overnight, Venya (Pyotr Skvortsov) becomes a deeply religious Christian, quoting the Bible (always the cruelest parts), and objecting to school curriculum and procedures. He starts by insisting that girls must not wear bikinis in swim class; the school administration gives in. Then he moves on to destroying sex education. Eventually he’s contemplating murder.

A troubled childhood appears to have set Venya on his horrific path. His divorced, secular mother works three jobs to put food on their table, and is generally unhappy. His father isn’t in the picture. Mother and son fight constantly. In fact, the whole religious thing starts with him trying to get his mother to write a note to get out of swim class.

Why do the principal, most of the teachers, and the local priest let Venya have his way? They’re also conservative Christians, and while not as fanatical as Venya, they carry many of the same views.

The one person he can’t turn is the science and health teacher (Viktoriya Isakova). She fights back. But when Venya disrupts her sex education class by stripping naked, the principal reprimands her for teaching safe sex. This teacher becomes The Student‘s single voice of reason, but it’s a voice that can’t compete, especially when Venya uses the trump card of anti-Semitism.

Venya befriends a bullied disabled boy with a serious limp – at least he learned some of the Gospels’ better messages. But he also bullies the boy in his own way. There’s a homosexual side of their relationship; you can imagine the disasters that that could bring.

By all reasonable standards, Venya has serious mental problems that make him a danger to himself and others, although there’s a possibility that he’s putting on an act. Either way, the fact that people oblige him rather than offer medical attention is a strong indictment of modern Russian society.

I found myself wondering how this film got to be made in today’s Russia. The story can easily be read as a parable about Putin’s government. People are set against each other. The church plays a role in keeping down “undesirables.” Lies come out of nowhere. And murder is an acceptable way to fix a problem. 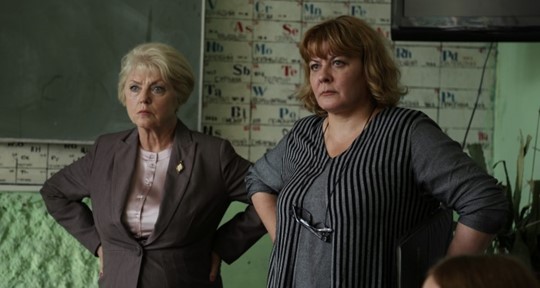 And if that isn’t clear enough, many rooms in the high school have a portrait of Putin on the wall.

The film also says something about our own endangered democracy, with its religious fanatics working hand-in-hand to take away our freedoms. After all, we’ve got Putin’s lapdog in the White House.