I don’t do the usual top ten list. Instead, as one year ends and another begins, I list my favorite movie-going experiences of the previous year.

What makes a great movie-going experience. A great movie helps a lot–but it isn’t entirely necessary. It’s a combination of the movie, the theater, the print, the projection, and even the audience.

An experience can include more than one trip to the movies, but usually doesn’t.

On Halloween, my wife and i improvised costumes and headed for the Castro–not for the street party, but for the movies: a triple bill of Night of the Living Dead, The Texas Chainsaw Massacre, and The Evil Dead. The show started with a hilarious selection of trailers–mostly of deservedly forgotten flicks. We skipped Massacre (I don’t care for it much) and enjoyed a very long intermission. The audience was rowdy and fun, and we ran into friends. Unfortunately, the print of Living Dead was badly battered. 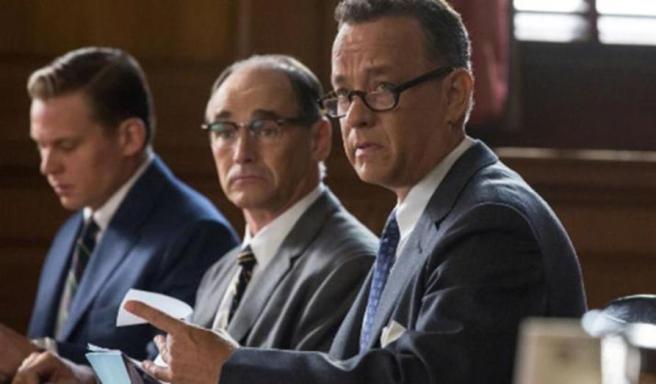 Not only did I get a chance to see Steven Spielberg’s complex and cerebral espionage drama with a festival audience, I also got to revisit an exceptional Bay Area theater I hadn’t been to in years. The Corte Madera is a rarity in today’s world: A single-screen first-run theater. But that single screen is one of the best in the Bay Area–huge and curved and perfect for immersive cinema. Wonderful movie, too. 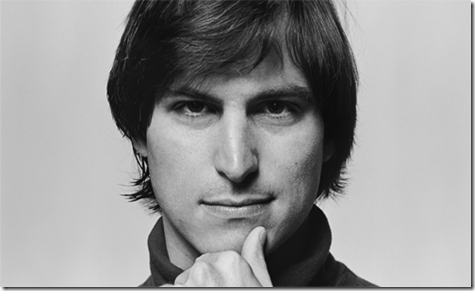 This year’s big festival started with a bang. Documentarian Alex Gibney was on hand with his new film, Steve Jobs: The Man in the Machine. After the screening (I gave the film an A), Gibney took the stage for questions and answers.

9: Noir triple bill with the Stones (no, not those Stones)
Castro
Noir City
35mm (I think)

The Noir City festival is always fun. But in 2015, the festival’s highlight were three thrillers made by Andrew and Virginia Stone, a filmmaking team whose work I was completely unfamiliar with until this screening. None of them were masterpieces, but they were all well-made and enjoyable. The usual Noir City audience helped with the enjoyment.

I finally saw the Apu Trilogy this year, on three consecutive nights. It’s clearly one of the great masterpieces of cinema (or, arguably, three of the great masterpieces). And it has been beautifully reborn with one of the most impressive restorations in history. The original negatives were destroyed in a fire, but L’Immagine Ritrovata at the Cineteca di Bologna physically restored much of the melted negatives to the point where they could be scanned.

I had never heard of this film before I read the festival program. It sounded interesting, but I didn’t know until it started that I was watching a masterpiece. Set in a small town high in the Alps, in what appears to be the last 19th century, Visages d’enfants follows the difficulties of what is now called a blended family–and–as is so often the case–it wasn’t blended very well. Beautiful restoration, and Stephen Horne‘s accompaniment–on piano, flute, and I’m not sure what else–just dazzled. Before the film, Serge Bromberg gave an informative and enjoyable introduction.

6: Inside Out
Grand Lake
3D DCP

Pixar’s animated adventure through the workings of the human brain can tell you a lot about how we humans behave, while remaining funny and entertaining for adults and kids alike. What’s more, the Grand Lake’s big Theater 1 is a great place to see 3D movies. By using two synchronized digital projectors, you get a smoother and brighter image.

The new digital restoration allows us to enjoy the movie as it was meant to be seen–and that hasn’t been available for decades. Yes, the plot is silly and some of the cowboy accents are terrible, but when you see Oklahoma! on the big screen, with an audience, you discover what a remarkable piece of entertainment it is. The songs are catchy, the jokes are funny, and Agnes DeMille’s choreography is amongst the best ever filmed. And the new digital restoration allows us to experience it in something similar to the original 30 frames-per-second Todd-AO.

4: Picadilly
Castro
San Francisco Silent Film Festival A Day of Silents
not sure how it was projected

The last silent film I saw theatrically this year was one I’d wanted to see for years. The Chinese-American actress Anna May Wong finally gets the great part she deserved in this British drama about dancing and sex in a London nightclub. Musicians Donald Sosin (on piano and Macintosh) and John Mader (on percussion) put together an often jazzy, occasionally Chinese score that always served the story.

In July, quite by happenstance, I was able to compare the old and new ways to project a film shot in Technicolor’s three-strip process. The first, Jean Renior’s The River, was screened pretty much as the original audiences saw it–in a 35mm dye-transfer print manufactured in 1952. The second, Michael Powell and Emeric Pressburger’s The Tales of Hoffmann, has been digitally restored and was digitally projected. Each was wonderful in its own way. 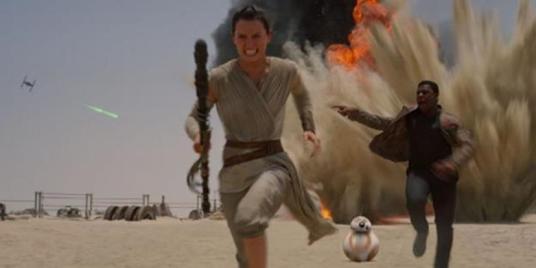 Director J.J. Abrams understands Star Wars better than George Lucas. He’s developed a fun, exciting fantasy film with the energy and wit of the original, pre-alteration trilogy. And the New Mission’s huge screen, first-class projectors, and enthusiastic audience made this a great way to see this particular type of movie. But it was expensive.

No movie here, aside from multiple clips which I suspect were run off a computer. Instead, we were treated to a talk, followed by Q&A, with the great British actor. He proved to be witty, open, honest, and knowledgeable about his craft.