Over the last few days, I’ve attended two separate three-strip Technicolor screenings at the Pacific Film Archive, each projected in a very different way. The first, Jean Renior’s The River, was screened pretty much as the original audiences saw it in 1951. The second, Michael Powell and Emeric Pressburger’s The Tales of Hoffmann, was presented in a way only possible in the 21st century.

I liked both films very much. And I loved both forms of projection. I’ll talk about how the films looked and why, then tell you what I thought about the movies–neither of which I’d seen before last week.

Technicolor’s three-strip format dominated commercial color filmmaking from the mid-1930s through the early 1950s. A special camera recorded each primary color on a separate strip of black-and-white film.

The prints made from these tree negatives were prints in a pre-photography sense of the word–as in a printing press. From each negative, Technicolor would make a special intermediate relief print that would be thick and thin instead of black and white. They would use these to stamp the color dyes onto the release prints. You can find more technical details at the Widescreen Museum and the Timeline of Historical Film Colors.

Both films were released in 1951, near the end of the three-strip period, and arguably when the technology, and the artistic use of that technology, was at its zenith.

The PFA screened The River in an archival dye-transfer print made in 1952. And yes, the colors were amazing–beautiful in a way that you simply don’t find in today’s digital projection. Or for that matter, in yesterday’s conventionally-processed color film prints. On the other hand, focus was often unreliable and soft. I don’t know if that’s a problem with the printing, the print’s age, or a flaw in the film itself.

But the colors they had were always beautiful. Such dye-transfer prints will get rarer over the years, so you should never miss the chance to see one (unless you really hate the movie, of course).

The Tales of Hoffmann, on the other hand, has just gone through a full digital restoration. So it was projected digitally from a 4K DCP. The look was cleaner, brighter, and sharper than The River’s dye-transfer print. And while the gorgeous, highly-saturated colors certainly popped, they didn’t pop in the same way as dye-transfer print.

Film shrinks over time, and you can’t expect three separate reels to shrink in exactly the same way. So restoring three-strip Technicolor is an art in itself. You scan the original black-and-white negatives (assuming they survived) at a high resolution. Edge recognition software and human eyes resize the three images so that they match.

With The Tales of Hoffmann, the results were beautiful. The images were sharp (except when they shouldn’t be), and textured. And the color was just gorgeous.

So which was best? The dye-transfer print had a special excitement all its own. You watch it the way you read a first edition copy of a classic book–with awe. You’re experiencing a rare treat and you know it.

Digital projection isn’t a rare treat. But it provides a beautiful way to present these films, sharp and clean. And while the colors may not be as good as dye transfer, they’re still an improvement over conventional color film prints.

And before you talk about “How the film was intended to be seen,” consider this: IB prints were notoriously irregular. No two prints would have the exact same colors.

So what about the movies?

The clash of civilizations appears as a friendly melting pot in this coming of age story set in British India. A happy English family begins to get unglued when the two oldest daughters both develop crushes on the same American veteran–who just moved in with their next-door neighbor. There’s tragedy and near-tragedy, and gentle comedy, and the warm envelope of people who love each other, even when they’re angry. Renoir paints (an appropriate term for Technicolor) an idealized version of British India, where everyone gets along, no one rejects a mixed-race girl, and western and eastern ways of life merge happily.

A- The Tales of Hoffmann 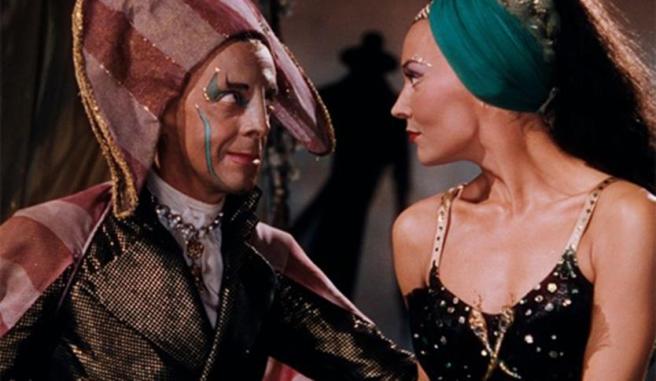 The Michael Powell and Emeric Pressburger film of Jacques Offenbach’s episodic opera (with the libretto translated into English) merge stage and cinema like nothing else I’ve ever seen–at least at feature length. On one level, there’s no attempt at cinema realism. The sets, costumes, and makeup have all the expressionism of the live stage. But, like the great dance sequence in Powell and Pressburger’s The Red Shoes, it could only be created in a movie studio. The three stories (four if you count the framing device) are the simplest of fairy tales. But the dramatic use of music, dance, light, and acting makes it all (well, almost all) amazing.