Miracle Mile starts as a quirky, one-of-a-kind romantic comedy. Harry (Anthony Edwards) woos Julie (Mare Winningham)–in a science museum–with his wit and his slide trombone. He meets her grandparents. They arrange a first date. He oversleeps and misses it. 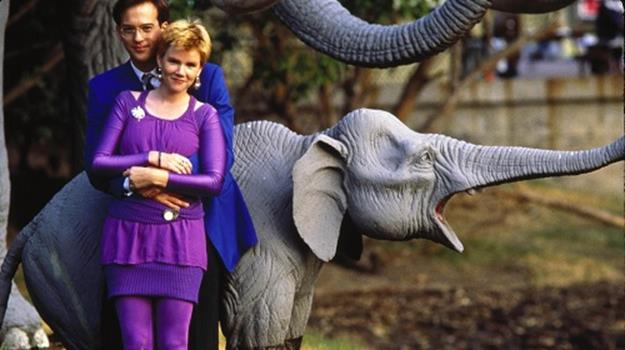 Then he answers a wrong phone number and discovers that everything he cares about–in fact, all of civilization–will be gone in a little more than an hour. The United States has fired nuclear missiles at the Soviet Union, and retaliation is inevitable.

Unless, of course, it was a prank call.

At that point, Miracle Mile becomes a very different type of movie. Following Harry in real time, it becomes both a heart-stopping thriller and a very dark comedy of disaster, as he tries desperately to find and save the girl who thinks he jilted her.

And, of course, everything goes wrong. And not just the little, funny things. Harry’s actions result in several deaths and the destruction of a gas station and department store. Eventually, Harry begins to doubt what he heard on that wrong number, but that’s no comfort either. If the bombs won’t be falling, he’s going to be in very big trouble.

The comedy drains away as the suspense increases and the film nears its climax. I found myself shaking in the film’s last minutes–and that was my second time seeing the movie.

Harry isn’t much of a hero. Yes, he puts his life on the line to save the woman he loves–even though they’ve only just met. But he makes one stupid mistake after another, and unlike a Hitchcock protagonist, he doesn’t learn much from his mistakes.

The story wouldn’t work at all if we didn’t care about Harry and Julie. De Jarnatt made a very good choice in casting Edwards and Winningham in the lead roles. They’re both attractive, but not gorgeous. Because they don’t look like conventional Hollywood stars, you can more easily accept them as real people. They’re not fantasy figures. It helps considerably that both Edwards and Winningham are excellent actors.

De Jarnatt and cinematographer Theo van de Sande shot most of Miracle Mile in long takes, often with excellent, dynamic staging and camera movements that don’t draw attention to themselves. This style, almost unheard of today, adds to the feeling that the movie is unspooling in real time–that ten minutes on the screen is equal to ten minutes in the characters’ lives. And when the minutes left in the characters’ lives may be draining away very quickly, the film becomes very tense.

Helping that tension is the remarkable music by Tangerine Dream, which manages to be unusual without drawing attention to itself. Chilling and taut, it produces the feeling of a nightmare.

The title comes from a Los Angeles neighborhood, not far from Hollywood, where most of the film is set.

Made in 1988 and released in 1989, Miracle Mile is probably the last film about nuclear disaster made during the cold war. It barely made a peep when it came out. I discovered this film, almost by accident, in New York in 2011. I wrote about it enthusiastically, and noted that it was available for home viewing only on a badly-cropped DVD. Since I discovered it, it has played once at the Castro.

In other words, it’s a very difficult film to see properly, either in a theater or at home. I’m glad to report that with the release of this Blu-ray next Tuesday (July 28), at least for home screenings that problem will be solved.

There’s nothing special about the case, and nothing inside that case except the disc.

When you insert the disc and get past the FBI warning, you’ll find a very stripped down and unexceptional menu. The only options are Play, Chapter, and Bonuses. There are no Setup options.

The disc only has nine chapters.

This low-budget film doesn’t call for an incredible transfer, and Kino didn’t give it one. But the transfer is more than acceptable. The colors look right, and pop when they should pop (which is often). Everything is reasonably sharp, and the film grain is clearly visible.

In other words, it looks like just what it is: A low-budget commercial American film from the late 1980s, shot mostly at night with very fast film.

Miracle Mile was originally released is Ultra Stereo, a competitor and to a certain extent a clone of the then ubiquitous Dolby Stereo. Coincidentally, this is my second Blu-ray review in a row of an Ultra Stereo film–the other being Hoop Dreams.

Like Dolby, Ultra put two discrete stereo tracks on the 35mm film, then used some electronic tricks to channel the sounds into four, rather than just two, directions. As far as I know, Ultra Stereo soundtracks were compatible with Dolby Stereo sound systems.

Kino is releasing Miracle Mile in 2-track stereo, without any instructions about surround decoding. Before watching the entire movie, I did some tests and decided that it sounded best with my receiver’s Dolby Surround Decode turned on. The tracks use lossless DTS-HD Master Audio compression, and sound great.

Still, I wish Kino had done what Criterion did with Hoop Dreams–release the disc with a 4.0 soundtrack. That gives you the original mix without any ambiguity about how the audio should be played.