I didn’t hit two jackpots at the San Francisco International Film Festival yesterday, as I did on Wednesday. But I enjoyed what I saw.

B The Intouchables
I can’t really complain about France’s latest big commercial hit. As you’d expect, it’s a crowd pleaser. Based on a true story, it follows the thorny but eventually healing 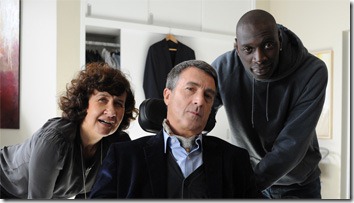 friendship between a wealthy paraplegic–paralyzed from the neck down–and the African immigrant hired as his caregiver. Of course it’s a box office bonanza. The movie is funny, heartwarming, and celebrates life. It stars two men of exceptional talent and charisma. It’s as carefully designed as a well-made clock. But it’s also just as predictable. Worse, it at times get uncomfortably close to magic negro mythology, and the "crisss" that ends the second act (all commercial movies have a crisis at the end of the second act) is utterly pointless and unbelievable. On the other hand, the first two acts are, if obvious, very entertaining.

I saw the last festival screening of The Intouchables (and the best; as I understand it; at the first screening there were no subtitles). The film will open in the States in late May.

David OReilly Says Something
I went into this presentation without ever having seen any of this young, Irish animator’s work. An Internet sensation, makes makes short, inexpensive cartoons that can be grotesque, poignant, and very funny–often all at once.  You should check 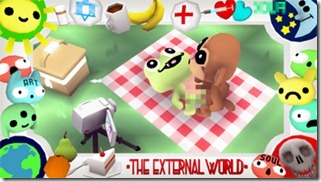 And don’t worry about seeing it on a computer. As OReilly pointed out from the stage, these shorts were never meant for the big screen.

Amongst the cartoons screened were the crudely-made yet sweet and sad "Please Say Something," which follows a relationship (a marriage?) between what appear to be a cat and a mouse. "The External World," my favorite of shorts, is pretty much indescribable. It includes the world’s worst piano teacher, cute little creatures eating ice cream (at least I hope it’s ice cream), a deadly Frisbee, and a surprisingly realistically animated cat. (Cats turn up in a lot of OReilly’s movies.)

In between the shorts, OReilly and festival programmer Sean Uyehara discussed his work, followed by Q&A with the audience. (I asked about that realistic cat.) 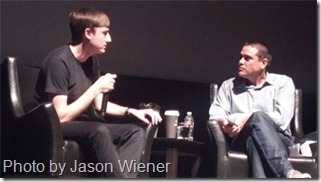