In 1974, many of the greatest African and African-American musicians alive came together in Zaire for a big all-star concert attached to the legendary Muhammad Ali/George Foreman fight. The fight was delayed, but the concert went on as scheduled.

But the film version of the Zaire ‘74 concert was delayed another 35 years.

It’s finally arrived, and its worth the wait. The concert footage is just amazing. 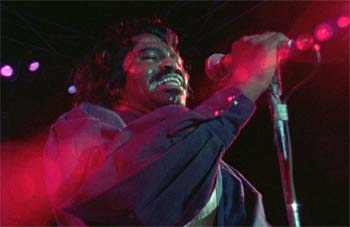 American stars like James Brown and B.B. King play their best, excited to be home in their ancestral continent. African stars little known in this country include the amazing Miriam Makeba, who does things with her voice I didn’t know were possible. In between the music, we watch the musicians backstage, discussing Black pride, money, and choreography. There’s even a tongue-and-cheek boxing match.

In fact, the best scenes are so good their worth sitting through the boring, pre-concert first half-hour of the movie. There’s no excuse for the dullness of these sequences of the concert coming together. A lot of interesting things were going on. You’ve got the struggles of setting up a big event in a foreign, third-world country, problems with the delayed fight, and black nationalism busting out all over. Plus you’ve got characters like James Brown, Muhammad Ali, and Don King to watch. But by failing to create a narrative in the editing room, Levy-Hinte manages to make those scenes disjointed and often dull.

But once the music starts, all is forgiven. How can you possibly complain about a movie where B.B. King gives the definitive live performance of “The Trill is Gone?” And there’s plenty more great music here, as well.