Frameline continues through the week.

A Katyn, Kabuki, Rafael, opens Friday. In the spring of 1940, Soviet special forces  massacred over 15,000 Polish prisoners of war, including the father of 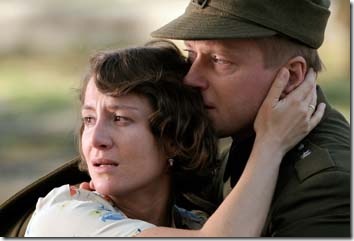 future filmmaker Andrzej Wajda. After the war, Stalin’s government insisted that the Nazis were to blame and suppressed the truth. Wajda tells the story of the crime and the cover-up through a handful of fictitious characters in this visually gorgeous yet emotionally shocking historical epic. The second half, set mostly after the war, sags through too many characters you haven’t really gotten to know, but it’s still an amazing recreation of a largely-forgotten atrocity. Katyn made my list of The Best Films You Couldn’t See in 2008; I’m glad it’s reappearing in 2009.

B The Phantom of the Opera (1925), Rafael, Saturday, 7:30. I haven’t seen the musical, but the original silent Phantom is a tough one to beat (despite some pedestrian passages). The demasking scene will stick in your memory for life. The newly-restored print recreates the original tints, 2-color Technicolor, and painted stencil colors. Accompanied live by the Alloy Orchestra, who also performed the last time I saw it, at a San Francisco International Film Festival event in 2005.

An Evening With Les Blank, Niles Essanay Silent Film Museum, Friday, 8:00. The anthropological documentarian (and East Bay resident) will screen some of his films (including "Garlic is as Good as 10 Mothers"), then answer questions from the audience. Part of the Museum’s June series on Local Independent Production.

it, and the bad guys are Nazis, but it’s as far from Schindler’s List as a great movie can get. What else can I say? If you object to mindless, escapist action flicks on principle, you won’t see it anyway. If you don’t, you probably already love it.

A A Hard Day’s Night, Rafael, 8:30, free. When United Artists agreed to finance a movie around a new British musical phenomenon, they wanted a picture fast and cheap. Reasonable demands, as The Beatles’ popularity was limited to England and Germany and could likely die before the film got into theaters. Turns out UA had nothing to worry about. A special, outdoor, sing-along screening.

A Bringing Up Baby, Stanford, Friday through Monday. How does one define a screwball comedy? You could say it’s a romantic comedy with glamorous movie stars behaving like broad, slapstick comedians. You could point out that screwballs are usually set amongst the excessively wealthy, and often explore class barriers. Or you could simply show Howard Hawks’ frivolous and hilarious tale about a mild-mannered paleontologist (Cary Grant), a ditzy heiress (Katharine Hepburn), and a tame leopard (a tame leopard). On a double-bill with Holiday, which I saw too long ago to have an opinion about.

cult status by writing and directing this witty mesh of interrelated stories involving talkative killers, a crooked boxer, romantic armed robbers, and a former POW who hid a watch in a very uncomfortable place. Tarantino entertainingly plays with dialog, story-telling techniques, non-linear time, and any sense the audience may have of right and wrong.