Waltz with Bashir, Elmwood, opens Friday. Animated documentary sounds like an oxymoron, but I’m not sure what else to call Waltz With Bashir. The bulk of the film consists of actual interviews that

writer/director Ari Folman had with other veterans of Israel’s 1982 Lebanon war, as he tries to reconstruct his own traumatic memories of the front line. But the interviews, and the flashbacks that illustrate them, are animated in a sparse yet aggressively 3D style. The result carries a documentary’s authenticity, but with a visual power that can only come out of the imagination. Extraordinary.

The Jazz Singer, Tiburon International Film Festival, Friday, 3:30. If you’re at all interested in film history, you have to see The Jazz Singer, even if it’s mediocre at best and racist by modern standards. In the space of about two years—from late 1927 to late 1929—the technology, business, and esthetics of movies changed like no popular art before or since. Stories once told through pantomime and printed title cards now depended almost entirely on spoken dialog. Studios replaced their open-air stages with sound-proofed blocks of concrete. Theaters laid off their musicians and wired for sound. And it all started with this sentimental tale of a cantor’s son who wants to sing jazz. Part of the Tiburon Film Festival‘s Warner Brothers tribute.

Bride of Frankenstein, Stanford, Saturday through Monday. You spend more time scared for the monster than of it in James Whales’ masterpiece. Boris 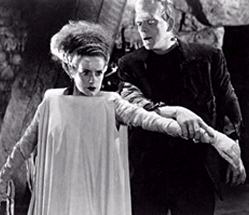 Karloff plays him as a child in a too-large body, the ultimate outcast torn between his need for love and his anger at the society that’s rejected him. If the blind hermit sequence doesn’t bring tears, you’re either dead, too cynical, or have seen Young Frankenstein’s brilliant parody of this scene once too often. With Colin Clive as the not-so-good doctor, Ernest Thesiger as a delightfully over-the-top even madder scientist, and Elsa Lanchester as both Mary Shelley and the monster’s mate (although, technically speaking, Valerie Hobson is the Bride of Frankenstein). One of the rare sequels better than the original. On a double-bill with The Sin of Nora Moran, which I’ve never heard of.

The Pirate, Pacific Film Archive, Saturday, 3:00. Not Vincent Minnelli’s best musical, or Gene Kelly’s, but still a splendid entertainment. With songs by Cole Porter and dance numbers choreographed by Kelly and Robert Alton. The mistaken-identity story debunks one romantic myth (pirates) while building up another (actors). One of the PFA’s Movie Matinees for All Ages.

making ace reporter Hildy Johnson a woman (Rosalind Russell), and scheming editor Walter Burns (Cary Grant) her ex-husband. And thus was born one of the funniest screwball comedies of them all–“with a bit of serious drama thrown in about an impending execution. On a screwball double bill with Twentieth Century.

Cabaret, Castro, Wednesday. In 1973, I was angry (but not surprised) that the obviously commercial Godfather had beat Bob Fosse’s Weimar-era musical for the Best Picture Oscar. Time proved me wrong, and while I wouldn’t today put Cabaret in the same class as The Godfather, it’s still a dazzling piece of style. On a double bill with Sweet Charity.